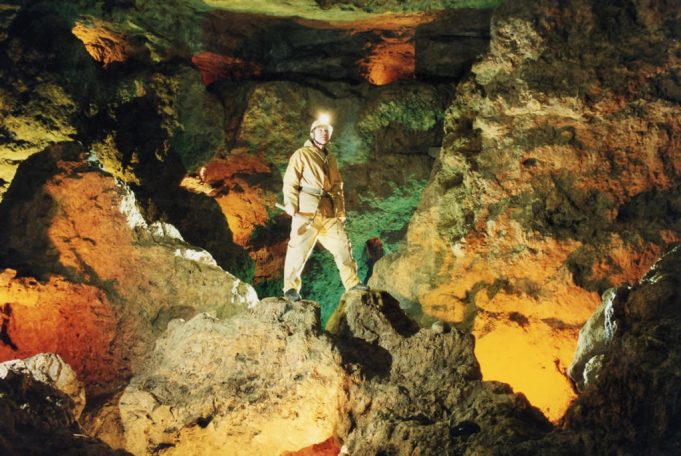 Llandudno is a seaside town on the coast of North Wales. Its long sandy beach, wide Victorian promenade, the longest pier in Wales (700 metres), and its many hotels, pubs and restaurants make it the most popular holiday resort in Wales. Towering above one end of the town is a 207-metre high limestone headland called Great Orme. On the summit is a tourist shop, cafeteria, visitors’ centre, play areas for children … and the largest Bronze Age copper mine in the world!

The view from the top of Great Orme stretches for miles along the coast, out across the Irish Sea to the Isle of Man and inland to Mount Snowdon and the Snowdonia National Park. The summit can easily be reached on foot or by car, and also by cable car and by a unique funicular tramway.

It has long been known that Great Orme had been inhabited in prehistory. In 1881, a man named Kendrick made some amazing discoveries in a cave on the headland. These included the carved jawbone of a horse dating from the Ice Age (now in the British Museum) and prehistoric beads made from animal teeth (now in the National Museum Wales in Cardiff).

It was also known that there had been mine workings on the summit of Great Orme, but these were thought to date back only to the Roman period. In 1987 it was decided to landscape the area opposite the Halfway tramway station for a new car park for visitors. A preliminary underground survey of the site was carried out, which involved cavers and mining engineers abseiling down a 145 metre shaft into the workings below. What they found has been described as one of the most astounding archaeological discoveries of recent times – a network of tunnels, together with artefacts such as bone tools and stone hammers dating back to the Bronze Age almost 4,000 years ago.

Since excavations began in 1987 more than 8 kilometres of prehistoric tunnels have been surveyed, as well as an enormous open-cast area on the surface. These show that the Great Orme site is the largest Bronze Age mine so far discovered anywhere in the world. In the Guinness Book of Records it is listed as the largest known industrial site in the ancient world.

Copper was a highly desirable metal, but it was not ideal for making tools or weapons as it was too soft. Smelting it down and alloying it with tin formed the ideal mix: bronze, a much harder and more practical metal. The tin would probably have been from Cornwall, around 480 km south of Great Orme by boat. This suggests a strong trading culture within Britain at that time.

Copper is mined from green malachite and it is estimated that in the Bronze Age over 40,000 tonnes of ore-bearing rock were removed from the site of the underground mine and the opencast surface mine. This could have produced around 1,700 tonnes of copper ore, enough to make 10 million bronze axes. In fact, the mine produced so much high-quality copper for making bronze that some of it was exported as far away as France, Holland and possibly Denmark. In Britain, as in mainland Europe, bronze was used for everything from jewellery to spears. Yet among the most common finds everywhere are axe heads, swords and daggers, suggesting that the Bronze Age may not have been such a peaceful time.

Virtually nothing is known about the people who dug these mines, roughly about the same time as Stonehenge was being built. The first workings probably followed surface veins of ore before mining down between the bedrock layers. What is amazing is that the original workings were dug using nothing more than stone and bone tools. Volcanic granite stones from the beach below would have been used as hammers, then animal bones (mainly from cattle) would have been used for more detailed work. Over 30,000 animal bones have been discovered at the site, ranging from cows, sheep and pigs to deer, dogs and small rodents. Only two human bones have been found at the site so far and these are on display in the Visitor Centre.

The tunnels and caverns range from huge hall-sized spaces down to cracks so small they could have only been dug out by children around 5 or 6 years old. The miners would have used animal fat candles to light their way in passages that extended for miles and went up to 70 metres below the surface. Ventilation in the tunnels would have been very poor, and it would not have been easy working in the suffocating atmosphere.

Archaeologists believe that the site was worked for a period of up to a thousand years until the mines were abandoned around 600 BC with the coming of the Iron Age.

There is evidence that the Romans reopened the workings, and after they left the mines again fell into disuse. In 1692 mining resumed again when advances in technology allowed water to be pumped out of the mines from a much lower depth than was possible in the Bronze Age. The copper produced in this period was of a very high quality. In the 18th and 19th centuries copper was in great demand for the cladding of the bottoms of Britain’s wooden ships, including those of the Royal Navy. But by the middle of the 19th century, demand for copper diminished as by that time ships were being made of iron. There was also competition from cheaper foreign copper ores.

The decline began around 1849, but the mines continued to produce more than 1,000 tons of ore per annum until 1861. Later in the Victorian period new shafts were sunk and one of these can be seen on the Visitor’s Route, where you can peer 145 metres straight down to sea level. Mining finally ceased in 1881 and the mine fell into disuse once again as Llandudno became known more as a Victorian seaside resort than a mining town. The mine was covered up by spoil at the end of the 19th century and forgotten once more, covered by thousands of tonnes of waste rubble.

A visit to Great Orme consists of a self-guided tour of the mines and the rest of the site. The route takes you underground into the mine itself through approximately 200 metres of tunnels. There are 35 steps going down into the mine and the same number coming back up. There are also a number of sloping tunnels. A safety helmet is provided and flat shoes are recommended.

Returning to the surface, you follow the pathways around the surface excavations to view the opencast mine and peer down the 145 metre deep Victorian mine shaft straight down to sea level. The Visitor Centre has a model depicting village life in Bronze Age times and displays of mining tools and original 4,000 year old Bronze Age artefacts discovered at the site. There is also the usual selection of books, souvenirs and other items (as well as a second-hand bookshop!).

The site is open to visitors every day, but nevertheless excavation continues and more discoveries are being made. Visitors are often able to chat to the team of archaeologists still working away discovering more tunnels and secrets at this extraordinary site. In the meantime you can watch the introductory film on the official website at http://www.greatormemines.info/tour/.