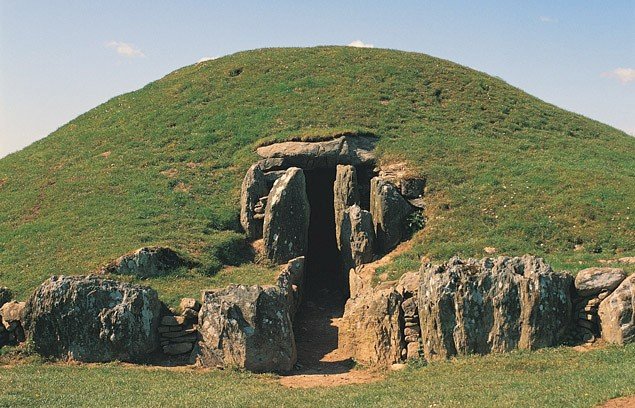 Just off the north coast of Wales lies the island of Anglesey, separated from the mainland by a stretch of tidal water known as the Menai Strait. Up to 1,100 metres wide, the strait is crossed by two bridges. The road bridge was the world’s first suspension bridge, built by Thomas Telford in 1826. The second bridge carries both road and rail traffic. Crossing either bridge into Anglesey brings you to a small village which boasts the longest place name in Europe (58 letters) – Llanfairpwllgwyngyllgogerychwyrndrobwllllantysiliogogogoch. A rough translation is ‘The church of Mary in the hollow of the white hazel near to the rapid whirlpool of the church of St Tysilio of the red cave’. 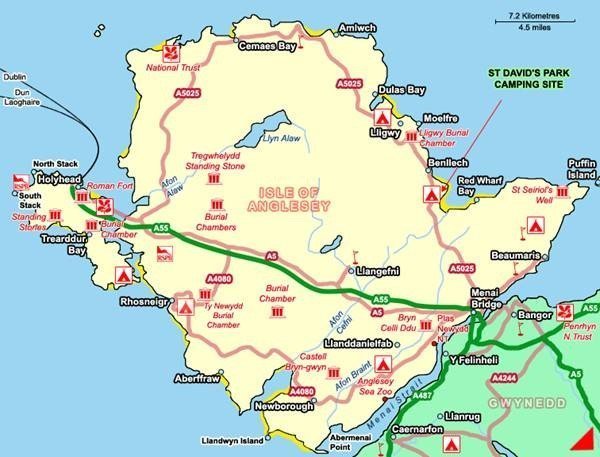 This fancy name was invented by a local resident in the 1860’s to promote tourism, and he certainly succeeded as the village is packed every day. Unfortunately – but fortunately for us – most visitors go no further than the tourist shops and remain unaware of a remarkable prehistoric structure which stands in the middle of a field just 6 km from the village. 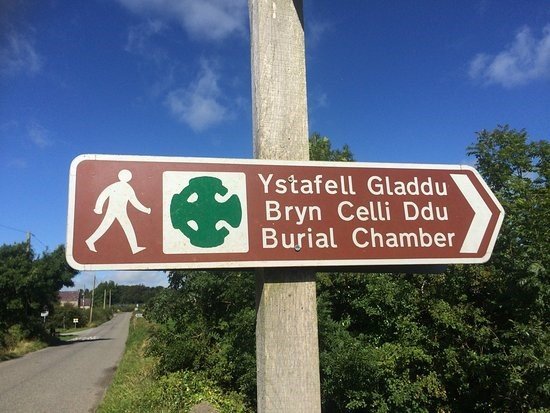 Leaving the car at a small car park on the side of a quiet country road, you follow a level path for a few hundred metres alongside a stream and then cross a footbridge into a field. And in front of you is the dramatic prehistoric burial mound of Bryn Celli Ddu or the Mound of the Dark Grove.

The monument is cared for by CADW, the Welsh Government department responsible for protecting and preserving historic monuments. Signs briefly explain (in Welsh and English) the history of this remarkable structure. Begun in the later Neolithic period around 5,000 years ago as a ‘henge’ or a ritual enclosure, it consisted of a bank (which is now lost) around an inner ditch. The ditch originally measured 21 meters in diameter and enclosed a circle of upright stones. The outer edge can still be seen and several stones from the inner stone circle also survive.

At a later date, towards the end of the Neolithic period, the henge was replaced by a passage grave, a type of burial monument also found in other places including Ireland and in Brittany on the west coast of France. Originally, the tomb would have been entirely covered by an earthen mound, but the present mound is a reconstruction.

The stone entrance has also been partially reconstructed. This leads into a narrow passage 8.2m (27ft) long by 0.9m (3ft) wide and about 1.5m (5ft) high. At the end of the passage is a higher polygonal stone burial chamber 2.4m (8ft) high, covered by two capstones.

Inside the burial chamber is a tall, rounded free-standing stone pillar. This is a replica and the original pillar is now in the National Museum of Wales in Cardiff. 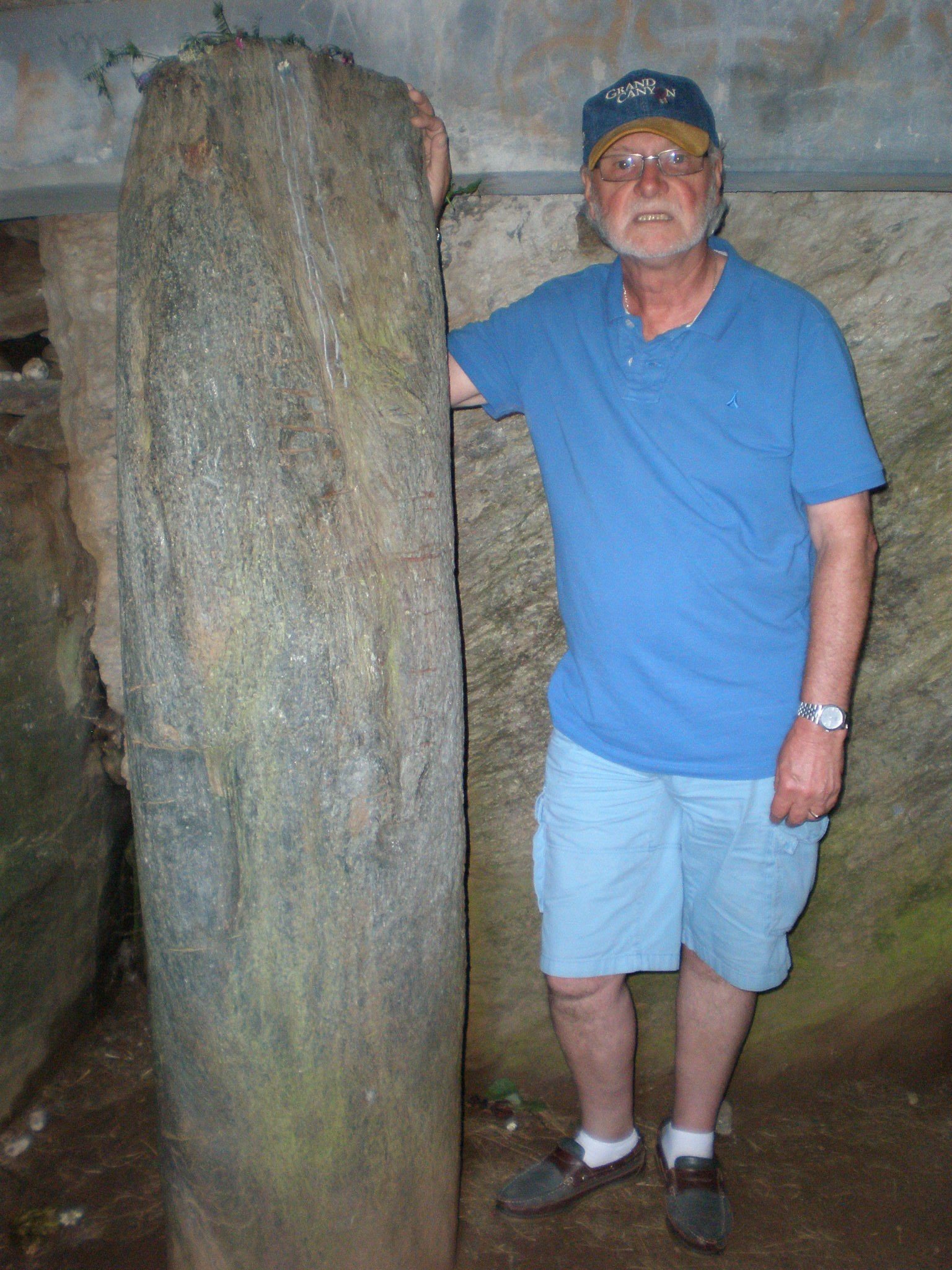 The purpose of the pillar is unknown. However, it is probably linked to the most remarkable feature of this ancient tomb. Unique in Wales, the entrance passage is accurately aligned to coincide with the rising sun on the longest day of the year. At dawn on midsummer solstice, shafts of light from the rising sun penetrate down the passageway to light the inner burial chamber. Perhaps this sunlight was meant to bring warmth and life to the ancestors of the people who built it?

The planning required to build such an accurate construction is described by Steve Burrow of the National Museum of Wales in his 2011 book ‘Shadowland: Wales 3000 – 1500 BC’ *. “A post was set upright and then the builders waited for a clear midsummer morning when they could mark out a line to fix the point where the sun rose on the horizon … Great slabs of stone were dragged into place (and) the passage was built … Another year passed and the alignment of the passage was checked to ensure that the rising sun would fall on the rear wall of the tomb’s chamber … But still more could be done to highlight the drama of the effect. Further additions were made to the passage, narrowing and extending it, increasing the precision with which the tomb caught the rising midsummer sun – warming the cremated bones of the community’s dead forever.”

A decorated pattern stone was discovered near a ceremonial pit at the back of the chamber. This stone is carved on both faces and across the top with zigzag and spiral lines. The original is now in the National Museum in Cardiff and a replica stands here at the rear of the mound.

Bryn Celli Ddu is one of several interesting prehistoric sites on Anglesey. Across the Menai Strait on the mainland, above Llandudno, stands Great Orme, site of the largest Bronze Age copper mine in the world (see the article on this site: https://www.hunebednieuwscafe.nl/2016/08/the-largest-bronze-age-copper-mine-in-the-world/)

 ‘Shadowland: Wales 3000 – 1500 BC’ by Steve Burrow is published by Oxbrow Books, Oxford, and the National Museum of Wales. The book is available in the shop at the Hunebed Centre