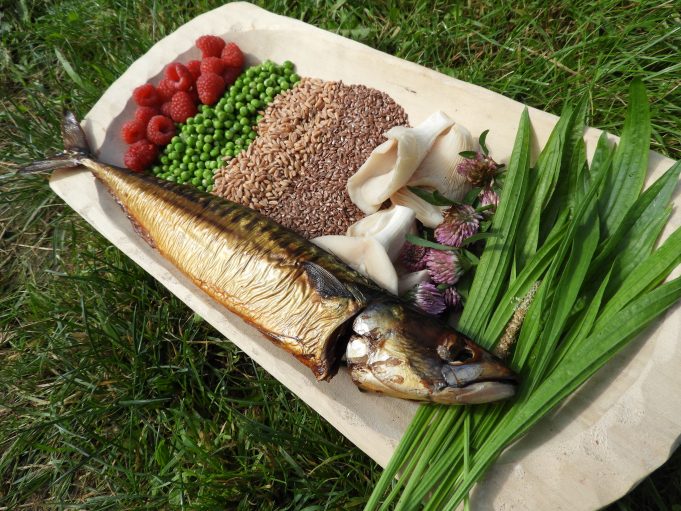 Surprising as it may seem, we know quite a lot about the food which prehistoric people ate. Much of our information comes simply from archaeological finds and also from just studying the landscape with its flora and fauna. Now and again archaeologists discover concrete evidence about food preparation and sometimes even the remains of foodstuffs. The remains of animals, plants and charcoal also provide us with information about the preparation and consumption of foodstuffs. Clues can also be found in ethnographic research about the food eaten by people in other similar cultures.

Some evidence has come from research into the carbonised remains of meals found in pots. We know for certain that prehistoric people used herbs, but it is difficult to establish whether these were specially cultivated or gathered in the wild and used against specific ailments and diseases. Many herbs and plants (some of them now regarded as weeds) may have been eaten as vegetables. Trees and shrubs were another source of food and you will find several other articles on this subject on our website.

The terms ‘caveman diet’ and ‘Palaeolithic diet’ are frequently used today, but what do they actually mean? They refer back to a time before farmers first appeared, a time when consequently there was no grain, no milk products and no processed food. People had to eat what they could hunt or gather. Researchers Thijs van Kolfschoten and John Speth (KEULEMANS, 2016) believe that many of the recipes used in the Early and Middle Stone Age would not suit us today. According to Speth there is a limit to the quantity of animal protein which a person can eat (35 per cent). The liver cannot absorb and process quickly enough the nitrogen compounds which are released. Recipes from Indans and the Inuit provide an insight into what prehistoric people might have eaten: pemmican (a mixture of fat, meat and berries), fat and fermented fish or meat. Fermenting (in other words allowing food to rot) would have been a common way for hunter-gatherers to preserve food. It involved burying the fish or meat in the ground and then waiting. Fermenting has the same effect as cooking and it preserves the food at the same time. Archaeological proof for the fermentation of food is difficult to find, but in the north of America there are indications that meat may have been fermented under water during the last ice age. Interesting research has been carried out by Dan Fisher (POBOJEWSKI 1995) using horsemeat under water.

People think of prehistoric people as hunters but gathering food was also very important for them, perhaps even more important. Women may have collected fungi, tubers, plants, small rodents, birds and insects. There are many kinds of edible ants, grasshoppers, beetles, termites, cicadas, dragonflies or moths (dead or alive). Gathering these provided sufficient for daily food. Hunting, which was often man’s work, would not always have been successful. Present-day evidence from the Hadza tribe in Tanzania shows that 97 per cent of the time the men return home with nothing, and among the San or Bushman in the Kalahari the figure is around 70 per cent. This can be explained by the fact that you do not only need good weapons but you also have to find the animals, get close enough to them, and then recover the animal after you’ve killed it. The argument that hunting was so important would appear to come from the need for a particular group to demonstrate its identity and status (KEULEMANS 2016).

One other thing that prehistoric people would have eaten was human flesh. Signs of cannibalism have been found in Gough’s Cave in Somerset, England (BELLO 2015).

Of all periods in prehistory, we know the least about food in the Early Stone Age. As we said earlier, fat was more important than meat. Finds from the last ice age are very rare. Excavations at Schöningen in Germany can be dated to the Early Stone Age (about 300,000 years ago) and these have produced many shattered bones – the marrow was important (KEULEMANS 2016). From an analysis of food remains found between the teeth of Neanderthal man it appears that they ate vegetables and flowers, including water-lilies (HENRY 2010). Neanderthal faeces also show that they ate carrots, nuts and vegetables (SISTIAGA 2014). It is estimated that plants formed 20% of the Neanderthals’ diet, the same as that of other people in the Stone Age. As far as meat was concerned, they ate mainly plant-eating animals such as mammoth and rhinoceros (NAITO 2016).

We know a little more about the period of the reindeer-hunters who lived during the last ice age. These people hunted mammals (both land and sea) and fished. Besides hunting, gathering also played an important role and that included plants, lichen, fungi, birds’ eggs and shellfish (KARG, 2011). In order to gain a greater understanding of these cultures it is important to look at other cultures which display similarities. In the case of the reindeer-hunters we can learn a lot from arctic cultures. We know from historical research that the Inuit ate large amounts of raw food. They also prepared food on an open fire or in cooking pits. Water was brought to the boil on ‘cooking stones’ in empty containers or in an animal’s stomach. Food such as meat and fish was roasted or grilled on flat stones. Examples of these stones have been found in the Netherlands at Oldeholtwolde and in the Holtingerveld (NIEKUS & DE VRIES, 2013). In Oldeholtwolde willow branches were used as fuel.

The landscape changed, as did the flora and fauna. The climate became noticeably warmer. The open woodland with juniper and birch changed slowly into coniferous forests. Hazel spread very quickly and was used intensively. Over the course of time the conifers changed into a more diverse landscape with broad-leaved trees such as elm, oak and lime, and fens and bogs also appeared. Open places and the edges of woodland provided people with a rich source of food. Reindeer migrated further north and with them went some of the reindeer hunters.

Here again we can gain some idea of food sources by looking at the climate and the flora and fauna. Foodstuffs were widely available and people did not have to travel long distances to find them. Each season provided a variety of different foods for the gatherers. In Spring they collected eggs and vegetables, and in the Autumn fruits and nuts. These fruits included blackberries, elderberries, wild apples, sloes (blackthorn), wild strawberries and raspberries. Wild vegetables and herbs included goosefoot, dock leaves, mugwort and nettles. Nuts included hazels and acorns.

Hunting, fishing and gathering were still very important and the landscape showed little sign of human influence. But the introduction of arable farming and cattle breeding brought changes both in lifestyle and sustenance (KARG 2011). Agriculture was of the “slash-and-burn” type which resulted in open areas being created in the thickly wooded ancient forest. Settlements grew in these areas, consisting of animal pens, gardens, orchards, fertile fields and meadows. The population grew.

The first crops were barley, einkorn wheat, emmer wheat, peas, lentils, flax, mistletoe and poppies. The first domestic animals were cows, pigs, goats and sheep. These animals provided not only meat but also raw materials such as horn, skins and milk. The harvest was stored in the houses and in provision stores. Food was cooked, roasted and baked over an open fire. There is archaeological evidence of bread ovens and pots used as griddles.

There was not just one single culture in the Netherlands during the New Stone Age but a number of different ones including the Funnel Beaker People, the Michelsberg Culture, the Corded Ware Culture (Single Grave Culture) and the Beaker Culture. When talking about food in the New Stone Age it is interesting to look at milk production. Going back perhaps 6,000 years, most adults in Northern Europe appear to have possessed extra genes which enabled them to break down starch and therefore also milk protein. Researchers have tried to establish whether specific cultures were able to break down milk in this way. Opinions about this are divided.

Recent research into the New Stone Age in the United Kingdom has also revealed that about 5,000 years ago voles were eaten, although they were also considered as pests (ROMANIUK 2016). This was the first time that research was carried out into rodents as a source of food. Perhaps rodents also played a role in other periods in prehistory. 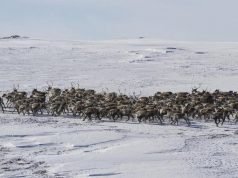 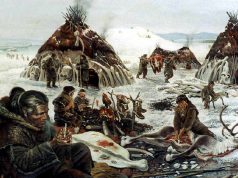 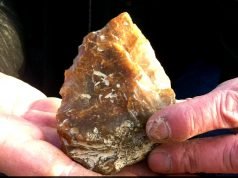 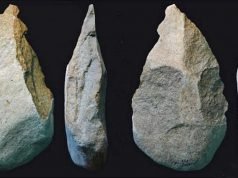