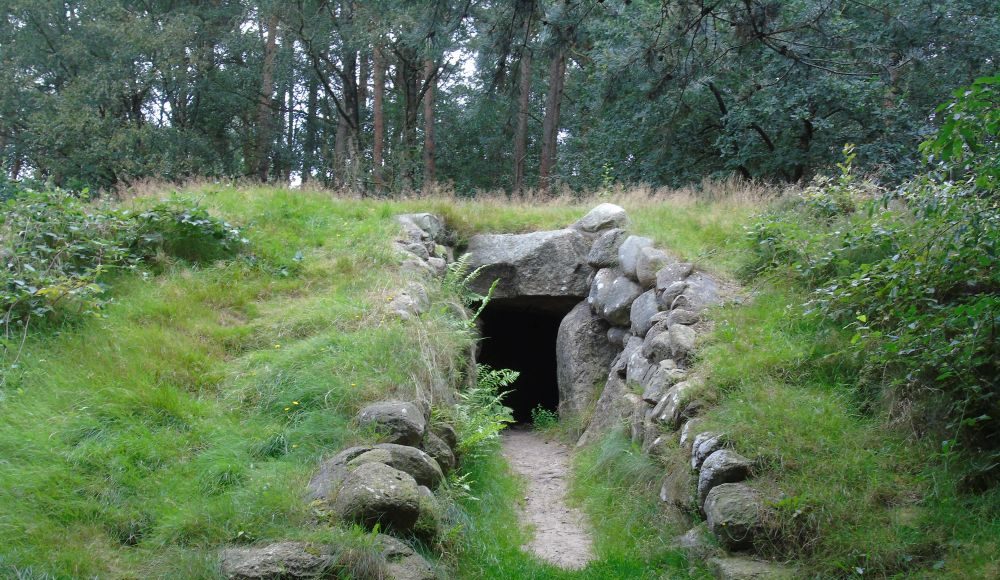 There are many hunebeds or megalithic tombs/long barrows in Germany, in fact more than 1,000. Most of them lie quite some distance away from the Dutch border, but not all. Just over the border near Emmen, close to the town of Meppen, is the start of the ‘Strasse der Megalithkultur’ – the Megalithic Culture Route – a 330-kilometre long route passing no less than 33 places where hunebeds can be found. The route runs from Oldenburg via Meppen to Osnabruck. Every place of interest along the route is signposted by the name of the hunebed and a ‘Station’ number. It may help you to know that these places are described in an accompanying travel guide and shown on a map and on an English-language website (http://www.strassedermegalithkultur.de/en). The individual “Stations” are described on another English-language website:

https://www.hunebednieuwscafe.nl/2016/08/hunebedden-bij-oldenburg/. In this article we shall visit the hunebeds between Meppen and Sögel.

The first sign on our journey appears very soon after leaving Meppen and after the turning to Sögel, on the right hand side near the village of Apeldorn. This is our first hunebed today, ‘Der Steinerne Schlussel’ or Stone Key (Station 13). It is not such a large hunebed but certainly worth a visit. You can clearly see that it is no longer complete and a number of stones have disappeared.

10 minutes further on we come to a beautiful stretch of road not far from Klein Stavern. There are no houses, only farmland and woods. Close to a place where a water-mill used to stand is a cluster of hunebeds, identified by a sign as Station 14 a-d ‘Grosssteingraber bei Deymanns Muhle’ or Megalithic Graves at Deymann’s Mill. No less than four hunebeds stand here in a line. Most are no longer complete and in one of them you can even see the boreholes which were drilled to split the stones. This was because stone was needed elsewhere, mainly for laying new roads. The foundations for these roads were often made from broken and crushed stones.

The area around these 4 hunebeds has long been a burial site. Close by there is also a grave field with more than 20 burial mounds dating from the Bronze Age.
One of the four hunebeds at Deymann’s Mill 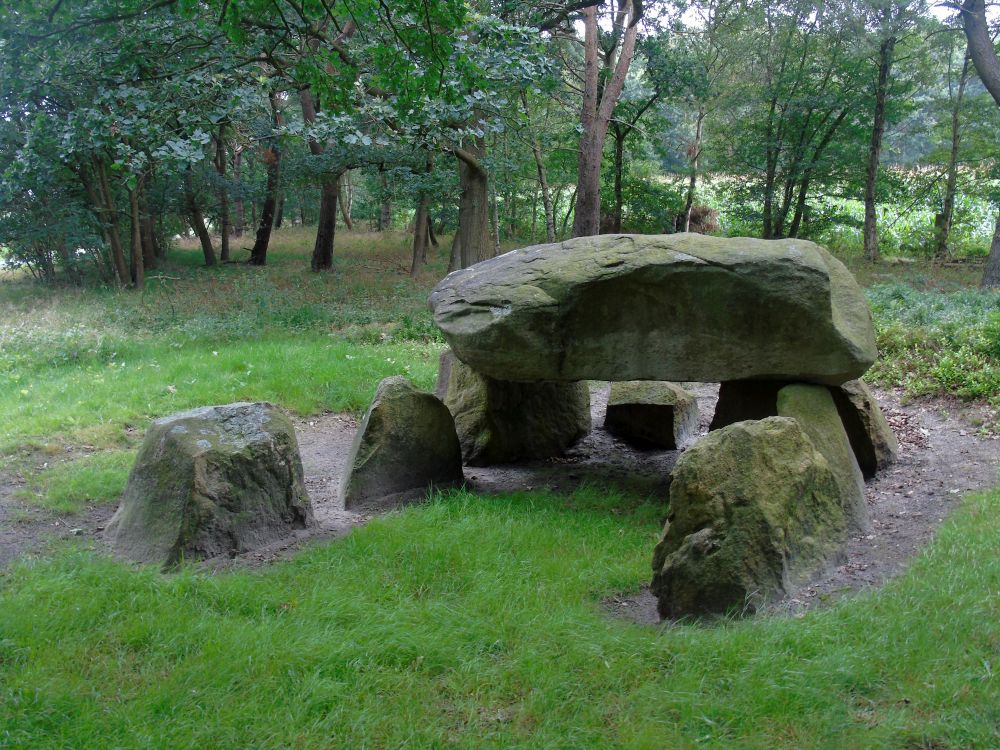 After about 10 minutes we come to a particularly large hunebed and the sign tells us that this is ‘Grosssteingrab Auf Bruneforths Esch’ or the Megalithic Grave at Bruneforths Esch – an impressive name. We can learn a lot from this tomb – the largest hunebed in Drenthe is the 22.6m D27 next to the Hunebed Centre in Borger. This hunebed here is no less than 25 metres long and ranks as one of the finest in the Emsland region.

At this point we shall take a break from visiting hunebeds and go and drink a cup of coffee at Clemenswerth Castle near Sögel. This castle was originally a hunting lodge for Clemens August I of Bavaria and was built between 1737 and 1747. It has an unusual central building surrounded by eight star-shaped pavilions. Architecturally the castle is considered a fine example of the Late Baroque in Europe, and is compared by art historians to the Baroque royal castles in France.

There is a restaurant where you can enjoy a cup of coffee or even lunch.

From here we shall visit a remarkable site – Station 16 between Huven and Gross Berssen. This is the so-called Hümmling Hünengräberstrasse or Long Barrow Road and no less than 9 hunebeds stand here in a line along the road. It is almost certain that there was already a road here past these hunebeds in the Stone Age. And the road has not changed in 5,400 years! The hunebeds lie immediately next to the road and they have impressive names such as Ipeken Tannwald, Im Ipeken, Wappengrab (‘Coat of Arms’) and Königsgrab (King’s Grave). 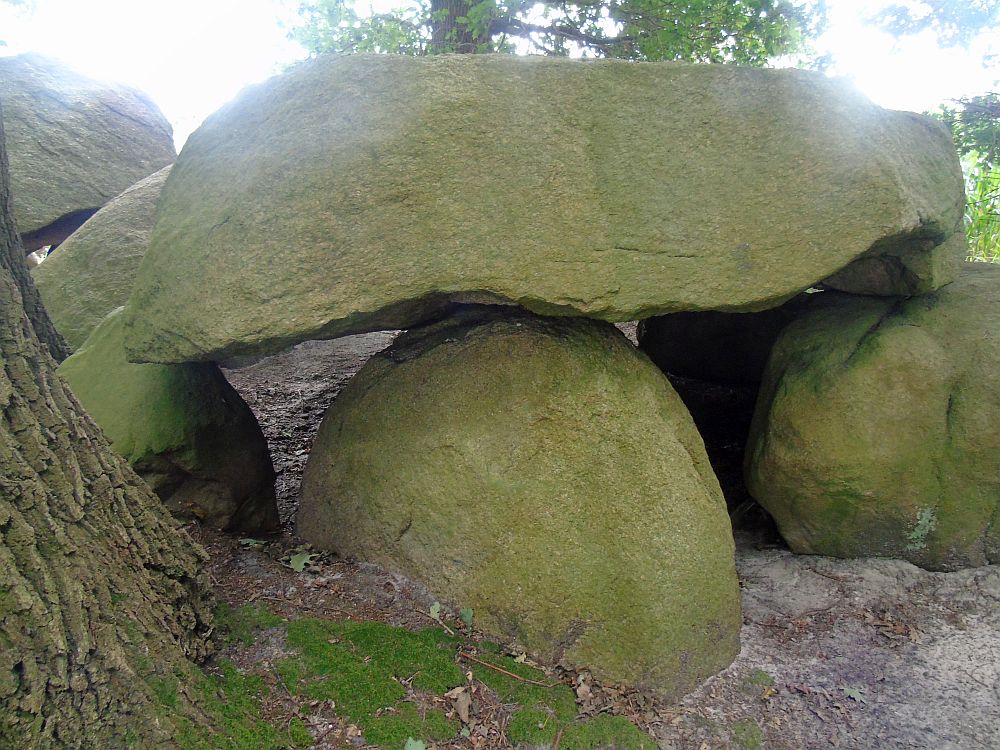 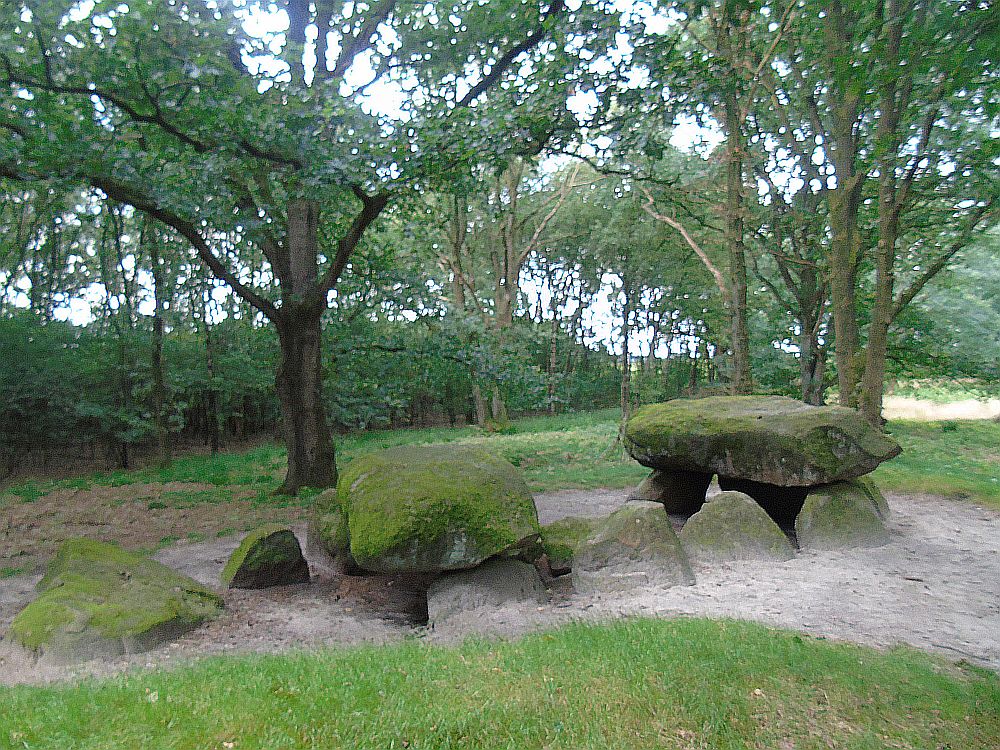 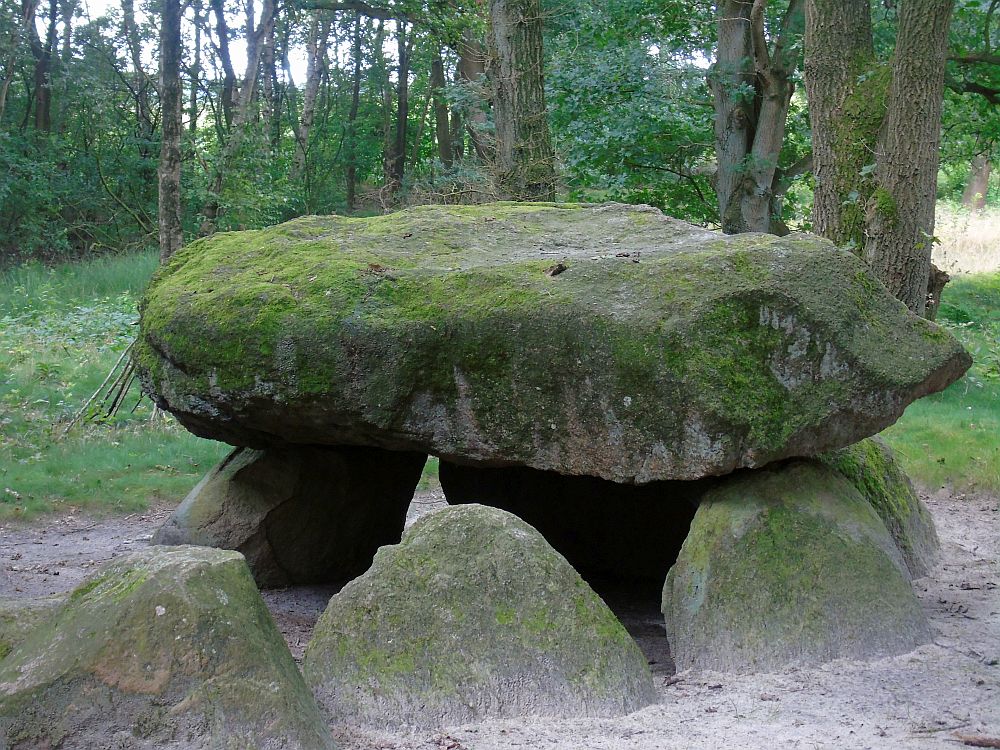 Also along this road is a reconstructed hunebed dating from 1955/1956. Today this would have been rebuilt in a different way and it would look very different, but it is interesting to see how people in the 1950’s thought that a hunebed must originally have looked.

A hundred metres further on stands the Königsgrab or King’s Grave. We don’t know why it has this name and certainly no king was ever buried here. But this is one of the finest hunebeds in Emsland and certainly the most beautiful along this stretch of road.

That is the end of today’s excursion. We have not seen all of the tombs by a long way and much more remains to be discovered.

More information about the Megalithic Culture Road and all of the sites can be found in English at: http://www.strassedermegalithkultur.de/en/33-exciting-archaeological-sites