In 2013 the Hondsrug region in the northeast of the Netherlands was awarded the status of a geopark and is now, since November 2015,  officially known as The Hondsrug UNESCO Global Geopark. As such it is the first – and only – geopark in the Netherlands.

But what exactly is a geopark? And why the Hondsrug region?

What is a Geopark?

There are currently 69 UNESCO Global Geoparks in Europe and around 120 worldwide. Each one is an area of geological interest, such as the Eifel and the Harz areas in Germany; the island of Lesbos in Greece; the Shetland Islands in Scotland; and the Brecon Beacons in Wales. Each of these areas may be said to have its own regional identity.

So how does a region benefit by becoming a UNESCO Geopark?  As with the better-known UNESCO World Heritage Sites, Geopark status is an internationally recognised ‘badge’ which helps to stimulate the local economy while at the same time guaranteeing environmental protection. Creating a greater awareness of the area’s heritage firstly gives local people a sense of pride and strengthens their identification with the area; and secondly encourages more people to visit the area through sustainable geotourism.

For the purposes of this article, the official definition of a UNESCO Global Geopark on the UNESCO website may be summarised briefly as:

To explain why the Hondsrug qualifies as a geopark, this article will look in turn at each of the five requirements listed above.

The Hondsrug Geopark region lies in the provinces of Drenthe and Groningen. It stretches from the city of Groningen in the north to the town of Coevorden in the south, and has a surface area of 930 square km. The region comprises four sand-covered boulder clay ridges – the Hondsrug, the Ridge of Tynaarlo, the Ridge of Rolde and the Ridge of Zeijen – which run parallel more or less from North West to South East. The most prominent of these is the Hondsrug itself, 70 kilometres long and more than 3 kilometres wide. In the lower areas between the ridges are the stream valleys of the Hunze and the Drentsche Aa rivers.

2. With sites of international geological significance

The Hondsrug region was created during the Saalian Ice Age about 150,000 years ago, when an ice sheet up to one kilometre thick bulldozed its way south over the area. The pressure of the ice and the force of the water as the ice melted left behind a landscape pattern of parallel ridges and depressions. In geological terms this is known as a ‘megaflute’ and the Hondsrug region is the only undisturbed example of a glacial Saalian deposit in the whole of Europe. In fact, this geological phenomenon is almost unique in the world, the only other example being in northern Canada.

The Hondsrug is also dotted with other geological features such as pingo remnants and erratic boulders. During the last ice age (the Weichselian), cover sand was deposited and meltwater valleys and stream valleys were formed. During the Holocene period, high moor peat deposits were created.

Compared with the rest of the Netherlands which is mainly flat (apart from Limburg in the South East) the landscape of the Hondsrug displays clear variations in height. The average altitude is 20 metres above sea level but this varies from 9 metres in Groningen to 26.5 metres in Emmen.

3. A continuous natural and cultural heritage

People have lived on the Hondsrug continuously for thousands of years. This is clear from the many archaeological finds and also from signs still visible in the landscape. The first people here were Neanderthal hunters who came in search of mammoths. About 5,000 years ago the people of the Funnel Beaker Culture built the massive stone tombs known as hunebeds, using the erratic boulders brought here by the ice thousands of years earlier. 53 of these megalithic tombs still stand in the landscape, 47 of them on the Hondsrug.

Because the Hondsrug was surrounded by peat bogs, the higher ground was the only place where people could live or travel high and dry, thus avoiding the treacherous ground in the lower areas.  The existence of an ancient road is apparent from a string of prehistoric sites such as burial mounds and hunebeds. From the locations of the hunebeds it can be seen that this route was already in use at the time of the Funnel Beaker Culture some 5,500 years ago.

The Hondsrug was – and still is – an important trade route, both north-south and east-west. In some places you can still see the deep ruts left by the carts which followed the roads over the Hondsrug. The road developed gradually from a sandy track into a cobbled road linking the farming villages, and even later into an asphalt road. The present-day N34, the provincial highway from Groningen to Emmen and Coevorden, is the 20th century successor to the original prehistoric route.

Other signs of continuous habitation are the typical farming villages with their thatched farmhouses and village greens. The Hunebed builders were the first farmers in the area, laying out the first permanent settlements. In the following centuries farmers built the villages and churches which are still characteristic of the Hondsrug region. On the eastern flank, the ‘peat colonies’ arose as turf digging became a major industry here from the 13th century right up until early in the 20th century.

So there is a very strong relationship between the cultural history and the far longer geological history of the formation of the local landscape.  Travelling along the Hondsrug involves a journey through over 5,000 years of human history!

4.Promoting awareness of the regional identity

Everyone knows the Hondsrug, tourists as well as local residents. But the story of the region is less well known and there is little awareness or appreciation of any regional identity. And yet studies in other areas have clearly shown that when people know more about their local history, they tend to adopt a more sustainable approach to their own environment.

The Hondsrug Geopark has already begun to change this situation by bringing to life the history and important features of the region for both tourists and local residents. A number of information centres and “Expedition Gateways” have been opened, each one focusing on a different aspect of the Hondsrug such as the Ice Ages, Prehistory, the Peat Industry, Water and Nature.

The Hondsrug Academy is an educational programme of lectures for local residents about the geological and cultural history of the region. Local schools are involved in a number of projects such as field trips and small-scale soil excavations 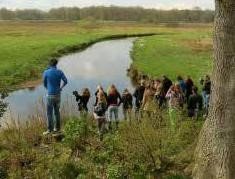 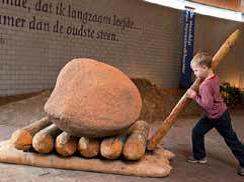 For many years the Hondsrug region has faced problems such as unemployment, a shrinking economy, a decline in the number of young people and an ageing population. The ultimate aim of a Geopark is to use the regional identity as a source of inspiration for the future, by translating it into sustainable economic regional development. Strengthening tourism is an important starting point for that process.

The Hondsrug has long been a popular tourist area, offering visitors – among other things – endless cycling and walking routes through unspoilt scenery and an enormous choice of accommodation from hotels to campsites and bungalow parks. Achieving the status of a UNESCO Global Geopark has already helped to reach a larger target audience, thanks to attractive marketing and promotional programmes mounted jointly with the regional marketing organisations of Groningen and Drenthe. The extra visitors stay longer and spend more, creating more job opportunities, all of which benefits the local economy.

This article explains what a Geopark is and how the regional identity of the Hondsrug meets all the requirements for UNESCO status. Other articles on this site explain more about the geology and history of the Hondsrug.

In the meantime, you can find more information about geoparks on these websites: 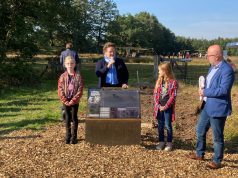 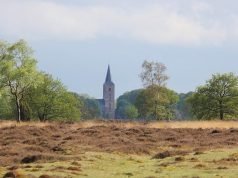 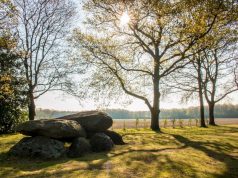