D41 is not large but it is still perfectly intact: 4 lintels on 8 uprights and 2 keystones. There are no portal or ring stones. The monument stands on a grassy heathfield right by the road from Emmen to Odoorn, opposite the residential area of Emmermeer. The red sign on a pole, common to most hunebeds, warns visitors that it is dangerous to climb on the stones and they do so at their own risk. It should really be forbidden completely, but that seems a hopeless task.

The hunebed was discovered in 1809 and was intact under its covering mound. The tomb was completely excavated and, for that time, very well documented as the drawing here shows. 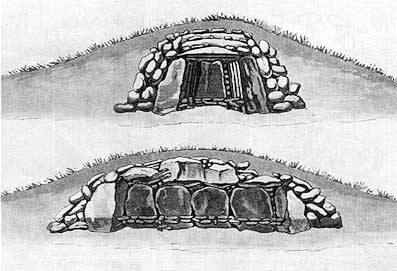 It can clearly be seen how the gaps between the lintels were filled with stones and those between the uprights with ‘dry mortar’. Note also the paved floor and the way in which the tomb was completely packed with small stones before it was covered with sand.

Van Giffen originally thought that D41 was an enclosed stone kist with no entrance. Later he discovered the entrance in an unusual place: between the first and second stones on the south side.

“The hunebed is in an excellent – almost original – condition” according to Van Giffen. That was because this fine tomb had remained undisturbed until 1809. Van Giffen judged that the research carried out by the discoverer Petrus Hofstede in 1809 had been very casual. He did not find any entrance but guessed that the first 2 lintels on the south side could have been portal stones. It was only in 1960 that that was confirmed when a ‘doorstep’ was found at that spot, but even then he could not find any signs of portal stones. The Province purchased the monument from the village elders of Emmen and Westeresch in 1869.