In prehistoric times, men used animal hides for all kinds of things, such as clothing (including belts and shoes), pouches, tents, blankets and bedding, etc. To make the skins last longer, they turned them into leather. This was not like the smooth supple leather which we know today. It was often covered in hair, like the original hide, and felt very rough. We know of several primitive techniques for making leather from animal hides, although we do not know precisely which methods were used in prehistory. However, we do know the animals and materials that were available, so we have some idea of the likely processes. This article explains how you can make leather from fish yourself.

There are countless ways of treating skins so that they will look good for longer and be better able to withstand the elements. As the name itself suggests, the first item used in tanning is tannic acid. This comes from plants, mainly the bark of oaks and chestnut trees. In prehistory the skin was probably not always really tanned, which would make the proteins permanently insoluble. Instead, the skin was cleaned and dried. It could be made a little more flexible by hanging it on a post or similar solid object and beating it repeatedly. Sometimes the hide was treated with substances to make it more supple and more weatherproof, such as brains (it was said that almost every animal had enough brains to treat its own hide), egg (yolk), oil, urine, etc.

Leather can be made from virtually any animal skin, and this includes fish. Perhaps that is difficult to imagine because the skin is very thin; but it is very strong and has water-resistant qualities because it is itself so rich in oil. Fish leather is still used today, for instance to give footwear a reptile-like appearance. The skin of every type of fish can be used, but it helps if the fish is quite large. Fish with or without scales are suitable.
Fish skin can be tanned just the same as other animal hides, but you have to keep an eye on the temperature: fish skin does not like warm temperatures so it is not suitable for boiling or for soaking in hot water.
Below is a step-by-step explanation of how you can make raw leather from a fish skin.

Requirements:
– Fish skin (in this example salmon is used);
– A knife, shell or other not-too-sharp tool;
– Eggs and vegetable oil (e.g. sunflower oil);
– A basin or other container;
– And a wood fire made with rotting wood.

Whatever skin you use, it has to be cleaned to some degree. The skins which I got from my fishmonger were already quite clean. The inside of the skin must be scraped clean with a knife or other tool. You could use a knife made of bone or iron, or even a flint. Be careful with very sharp tools as they can cut the skin. Sometimes it helps to start scraping by placing the knife in a corner of the skin and working from there. Keep scraping until the skin feels smooth.

Next remove all scales from the outside of the skin. Scraping in the opposite direction to which the scales grow will loosen them

Now rinse the skin thoroughly with cold or lukewarm water and wring it out well. The skin will now look a bit like the skin of a reptile.

The skin must now be soaked. Soaking the clean skin in a mixture of emulsified oils (such as brains, egg yolks or vegetable oil) makes it softer and better able to withstand the elements. I use a mixture of eggs and sunflower oil. The oils replace the moisture in the skin but it is the yolk which is the active ingredient.
Lay the skin in a suitable container with the egg and vegetable oil mixture, smearing the mixture well into every part of the skin. The skin must be completely covered on all sides with the mixture and then left to soak for about 24 hours.

After soaking, the skin is again rinsed clean and wrung out to remove as much of the moisture as possible. The skin will look its best if you keep moving it around until it is completely dry. You can now stretch the skin, for instance by pulling and moving it over the edge of a post or a table (I use my kitchen tap). Stretch the skin in all directions, making it longer and wider. You can see that the skin is already very strong. Let it rest now and again but it is important to keep on stretching and moving it until it is almost dry. If you don’t do this, you will end up with a skin which is shrunken and hard. After this treatment the skin should feel a bit clammy.

This last step is necessary to make the skin waterproof, and the smoke also prevents the growth of mould and bacteria. The smoke can sometimes change the colour of the skin. You can smoke the skin over a low (not too hot!) fire. The intention is that the skin catches as much smoke as possible, but does not get hot. This can best be done by using rotting wood to produce the maximum amount of smoke. After smoking the skin might again feel a bit stiff, but it will become more supple if you move it about vigorously.
After these four steps the skin has become leather and is ready to be used for making shoes, clothing, bags, belts, or even lanterns, etc. I have noticed that fish skins treated in this way do not become very soft, but often remain slightly transparent (Figure 11). This gives a very strange effect, for example in a lantern, but makes it perhaps less suitable for clothing. Below is a picture of a splendid parka made of fish leather (Figure 12). 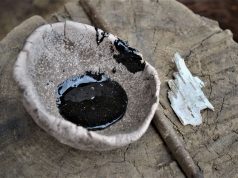