Menorca is one of the Balearic Islands in the Mediterranean Sea. It lies close to its big brother Majorca, well-known as a popular and attractive holiday destination. Menorca is perhaps less well-known and less often visited, but anyone interested in prehistoric monuments will find the island very interesting. This is the second of two articles describing some of the local sites. The first part covered the left-hand side of the island (See: insert weblink here), this second part will cover the right-hand side.

The excursions described in this article are:

A short introduction to the prehistory of Menorca.

Menorca was probably already inhabited ca. 6500 years ago. The oldest traces of human habitation are 4,000 to 5,000 years old.

Remains from the oldest prehistoric period, for example, include the 14 caves in the area around Cala Morell which were used for burial and as dwellings between 2,000 and 3,000 years ago.

One of the most famous prehistoric monuments is the Naveta d’ Es Tudons, a limestone ‘naveta’ or grave monument to the east of Ciutadella. The monument, shaped like an upturned boat, is estimated to be 3,000 to 4,000 years old. The naveta consists of two chambers, one above the other, separated by a ceiling of stone slabs. The human remains were laid in the upper chamber (see Part 1).

The Talaiotic culture arose around 1400 BC. Temple complexes were built with the very characteristic ‘taula’s’, enormous T-shaped ‘tables’ up to four metres high. These probably had a religious or ritual function. Other characteristic structures from this period are the so-called ‘talaiots’, a kind of look-out tower built of large loose stones piled up into enormous edifices. Most of these are massive, and sometimes structures with an entrance were placed next to them.

In the heyday of the Talaiotic age the island was visited by various other peoples, who were either in search of trading partners or new regions to conquer, such as the Venetians, Greek seafarers and people from Carthage. But that is another story, and I will confine myself here to the megalithic culture.

This is regarded as one of the finest archaeological complexes in the Balearic Islands. It stands close to Mao (or Mahon) and the many direction signs make it easy to find.

This complex is known for its ‘taula enclosure’, a sanctuary centre dating from the late Talaiotic age around 550-123 BC. Such an enclosure can only be found in a few places in Menorca. It is known that there were 30 in total but only 7 now remain. The one at Trepuco is the second largest. Below is a drawing of such a sanctuary.

Trepuca was excavated in 1931. Various artefacts were found inside the enclosure, such as concentrations of ash, animal bones and many pottery shards, mainly from an amphora which would have contained wine. These finds are all related to the rituals which were once celebrated here.

This is a privately-owned archaeological complex with a few surprises. For instance, you are welcomed by the two donkeys who stand guard the site.

This site is well hidden in the surrounding landscape. As it is in private hands the site is not listed in the travel guides which means that fewer visitors come here. We had the whole site to ourselves. It is not the most attractive complex but still remarkable. The shape of the talaiot in this complex, for example, is unusual and there are at least two taula enclosures (or at least what is left of them). Research shows that the first inhabitants in this area came here around 2100 BC. Tombs, monuments similar to hunebeds and artificial caves from that time have been found here. The first large constructions (talaiots) date from around 850 BC and were abandoned in 550 BBC. The site was still inhabited after this date and round houses were built. The remains of these can still be seen. The taula enclosures were also erected during this time. The site was abandoned in 123 BC, around the time that the Romans arrived on the island. 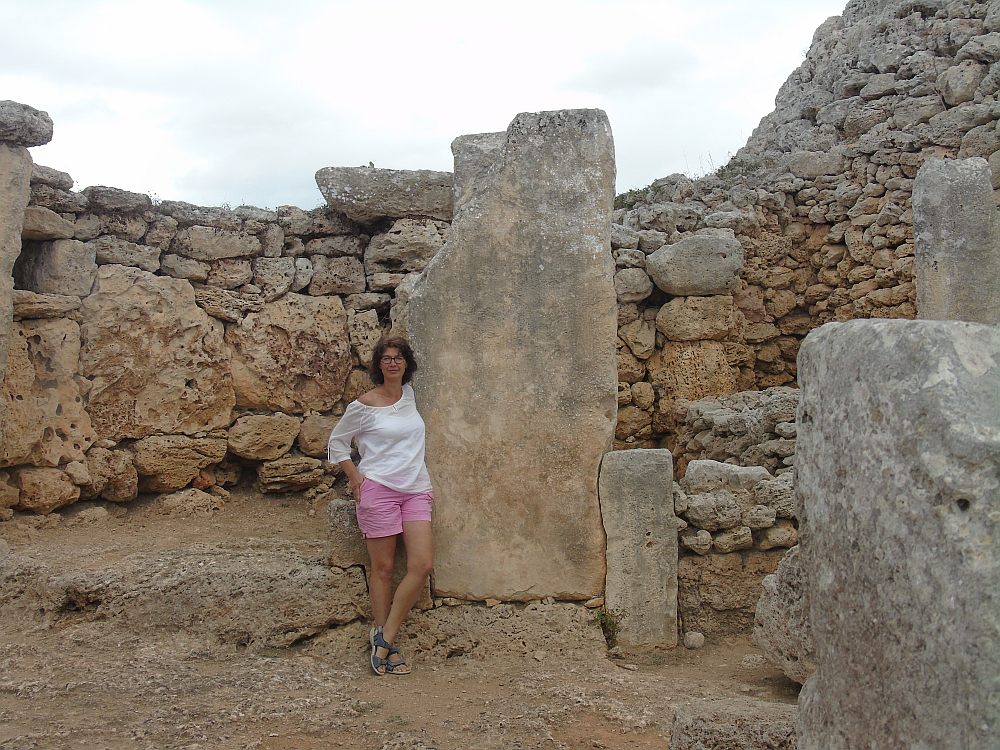 This complex is one of the best known in Menorca and attracts many visitors. For that reason there is an entrance fee.

This complex also shows signs of two distinct phases. The first phase is the Iron Age (850-550 BC) and the second is the so-called post-talaiotic age (550-123 BC). The complex contains architecture from both periods but building ceased here when the Romans arrived in 123 BC. What makes this site remarkable are the structures which were used as houses, and which were adapted and used in later periods (after the Romans), even as late as the 13th century A.D.

This is the largest archaeological complex and even has its own visitors’ centre. You will not be the only visitor here but you certainly should not miss it. Excavations are still carried out here every year. 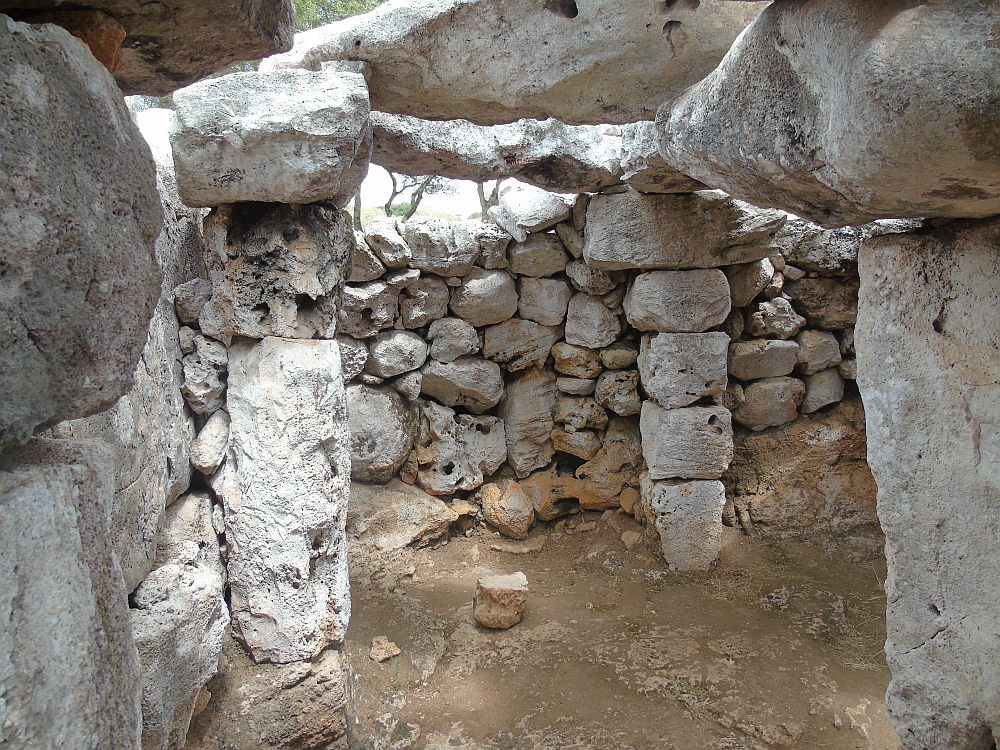 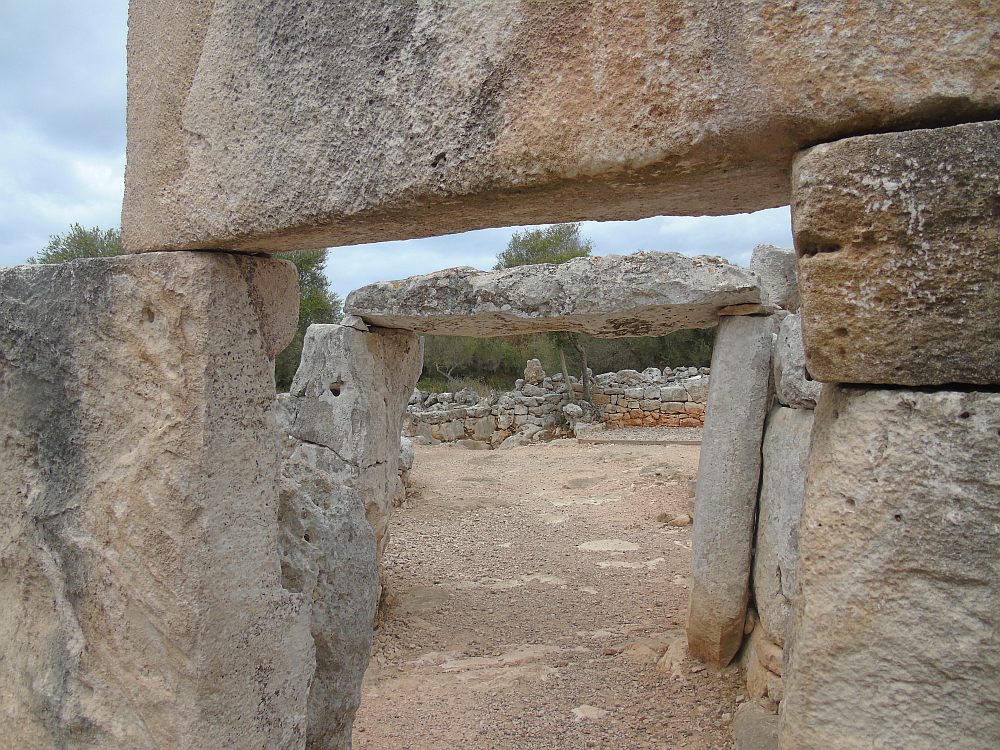 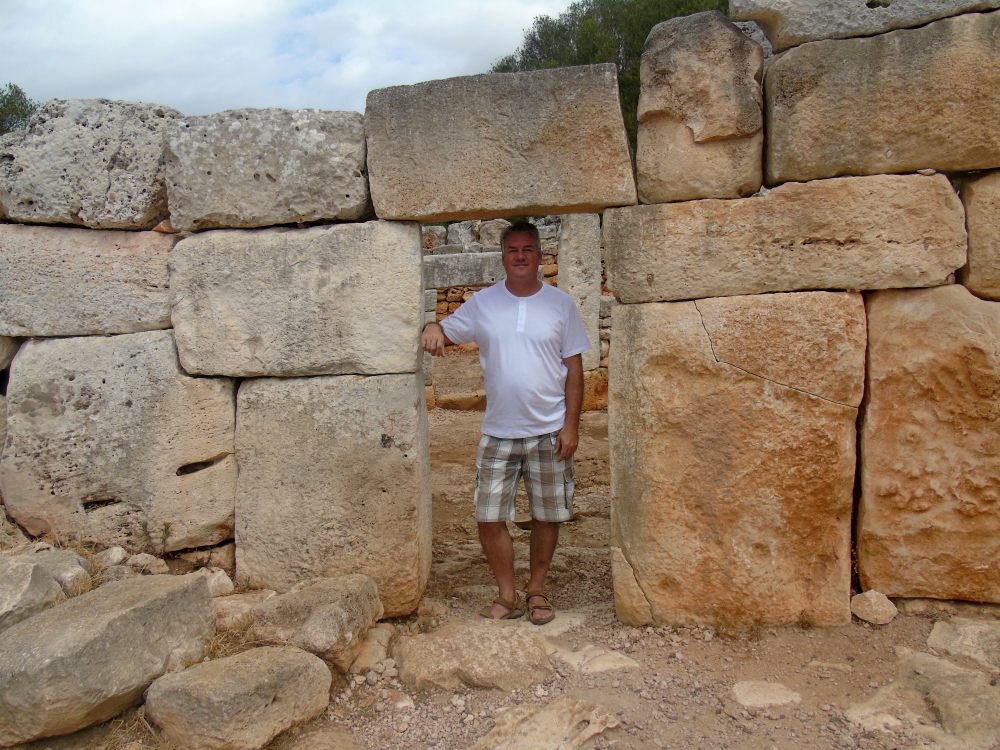 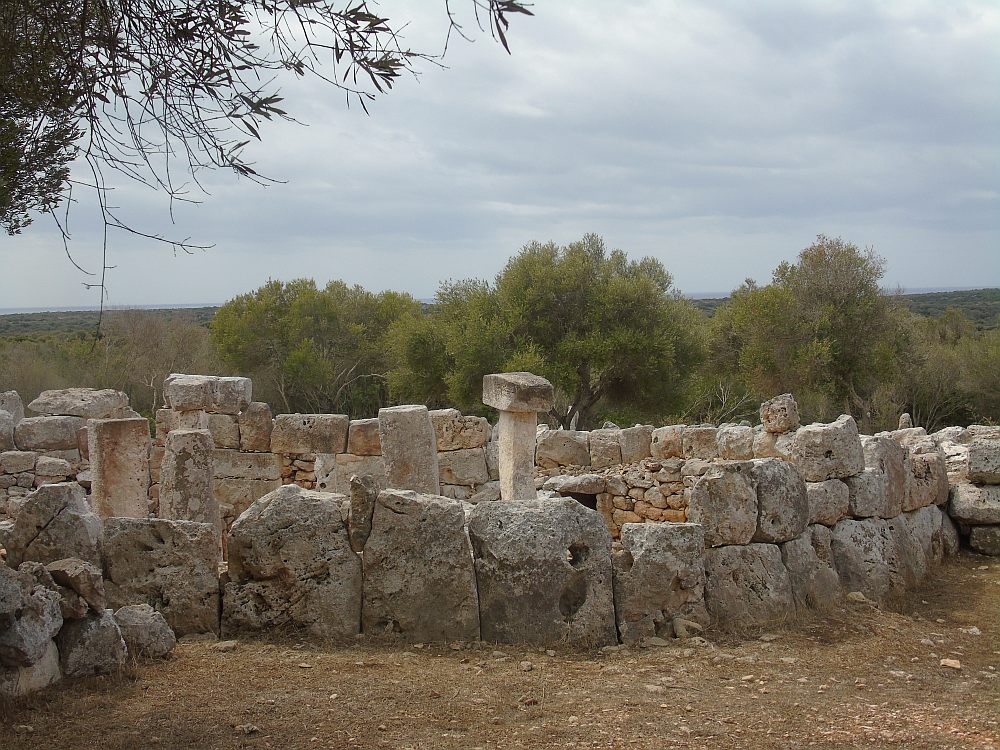 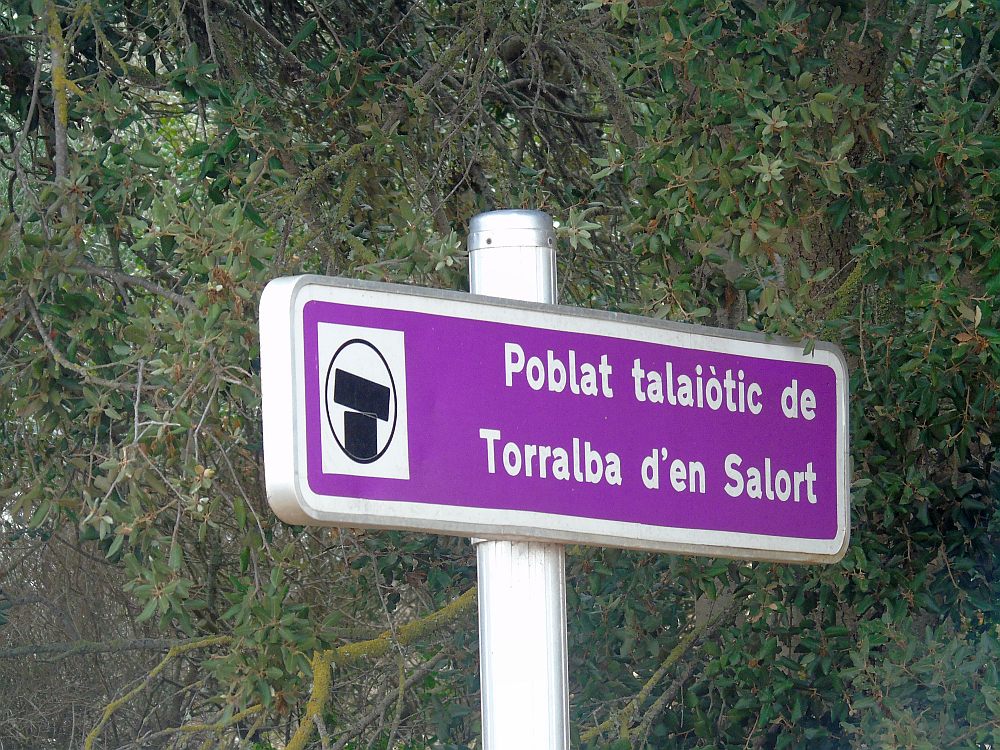 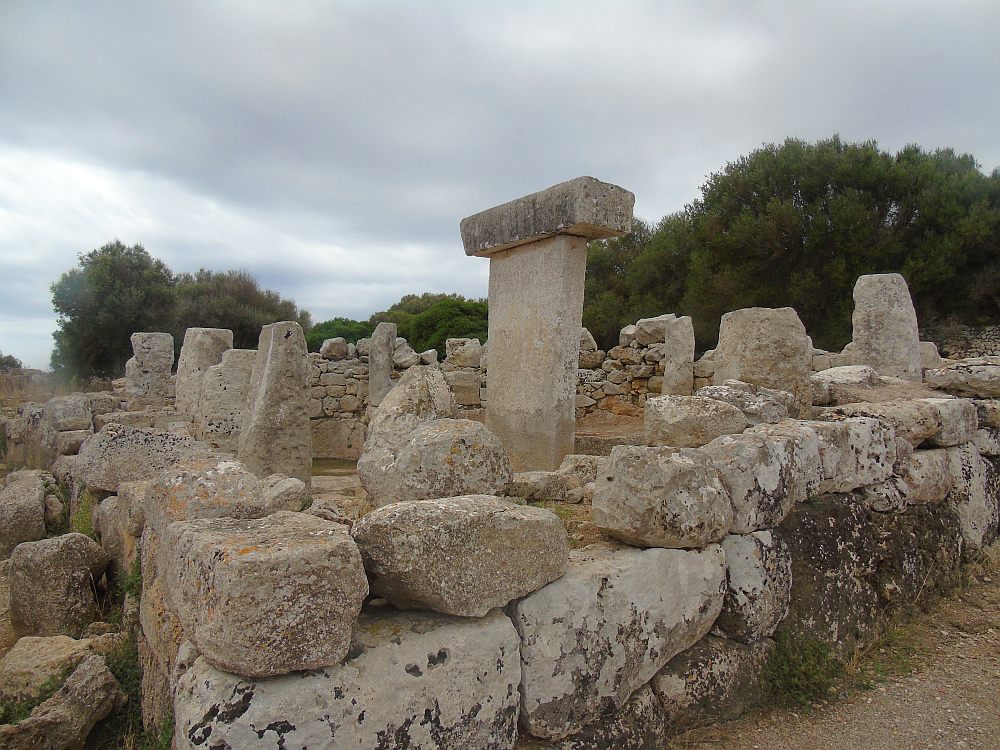 More fine examples of taula-enclosures from the late Talaiotic age

This is the end of our journey to Menorca. I hope that these two articles have persuaded you that it is well worth visiting this small island in the Mediterranean, certainly if you are interested in archaeology. It is home to a remarkable and unique culture which you will find nowhere else.

To read the first of these two articles, click here insert weblink here