This story from prehistory takes place near the largest megalith in Borger. It’s about Tidenka, daughter of a builder of these dolmens. Tidenka is eleven summers old.

(Based upon an idea by Yvonne Ording)

It’s a misty chilly morning in the early spring. Tidenka crouches by the fireplace and blows into the flames. When the fire burns to her satisfaction, she tends to her daily chores. It’s a day like any other, at least so it seems. Kai, a large wolfhound, circles around her.

From time to time Tidenka involuntarily touches her necklace. And every time she does she whispers a little prayer: ‘‘protect me, Great Earth-mother’’. She has no special thoughts by doing this; she just does what her mother told her to do.

Getting water from the river is one of her daily tasks. Carrying the earthenware-bucket she walks down the path to the riverbank. Upon arriving at the great dolmen she pauses. Whilst touching her necklace again she repeats her prayer. It’s been more than two summers since grandfather has been entombed in the impressive structure. She always has to think of him when she passes the dolmen. Grandfather was a wise man. He always showed great respect for the lives and especially the hard labor women in the settlement have to endure.

Not all the men think likewise. As far as Tidenka is concerned, men are rather lazy creatures. They highly think of themselves while they only prepare the fields for sowing. Of course they hunt and fish, but their stories thereabouts are always bigger than the fish they catch or the game they allegedly have killed. Braggers!

The women generally do all the work. They sow, they reap, and they tend to the cattle, collect firewood, keep the fires burning, prepare food and take care of the children. They do more than a thousand chores, each and every day.

Granddad was one of the very few who understood. As he was too old to do hard labor, he did everything else to lighten the burden of the women and girls.

For instance he looked after the little ones, assisted with baking pottery, and not seldom he took Tidenka’s water bucket to the river.

Bye granddad, Tidenka whispers, as she walks through the trees to the river. Suddenly she stops; this morning feels different than others. In her head a voice calls ‘caution, caution’.
She looks around but notices nothing out of the ordinary.
Tidenka briefly touches her necklace. Then she moves on, but suddenly stops. She knows now why this morning differs from others: the birds don’t sing and it’s eerily quiet. It is as if even the forest holds its breath. A second later Tidenka stands pinned to the ground. The bucket falls from her hands and shatters to pieces on de ground.
Three wolves are drinking in the water from the river. The largest one lifts its head, snarls and stares at the girl with its blazing yellow eyes.
Tidenka stands transfixed with fear. She cries out but her mouth produces no sound. She wants to run away but her legs refuse to comply. She seems hypnotized by the wolves’ eyes.

In the meantime the other two wolves also notices the terror-struck girl and the three animals slowly approach her to five spear lengths. Then they stand motionless en seem to hesitate. Why is that?

Something big and black bolts past Tidenka. Hair raised and angrily growling Kai the wolfhound comes to a stand still just in front of the largest wolf.
Tidenka, suddenly freed from her fears, starts running away calling for help. ‘Return home’, echoes in her head. The wolves have lost all interest in her. Instead they focus on the snarling, biting and barking Kai, dancing around them.

Meanwhile, having heard Tidenka’s yelling and Kai’s barking, the villagers hurry to the river. As the wolves see the men approach they flee, followed by a fiercely barking Kai.

On the same morning in the early spring the men set out to catch the wolves. They kill one with an arrow. It’s a small wolf, a female. They proudly carry their trophy into the settlement.

Eyes filled with horror Tidenka looks at the dead animal, recalling the fear she felt earlier. This fear had stirred every fiber of her body.

‘‘protect me, Great Earth-mother’’, she whispers. But now she does so with more conviction than ever before. Briefly she touches her necklace.

Kai presses his hairy head against her leg. As she makes an attempt to stroke him she notices a scar on his ear. It is a grim reminder of his encounter with the wolves. Tidenka embraces her brave animal, which in turn begins licking her face.

As Tidenka looks up at the men who are standing by the dead wolf,
her father nods and smiles at her. Men are tough guys after all, she thinks. They may be a little lazy, but they did save her life! And everywhere around her Tidenka can hear the birds sing again.

This happened 5.500 years ago in what is now called the Province of Drenthe. 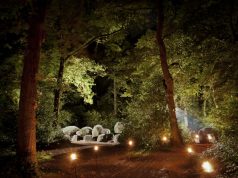 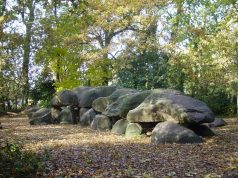 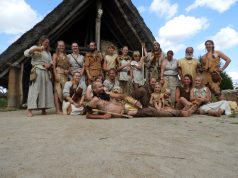 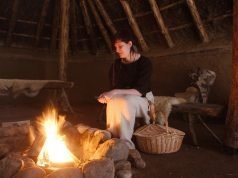 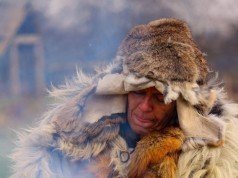 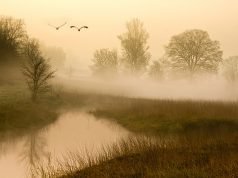 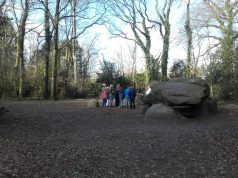 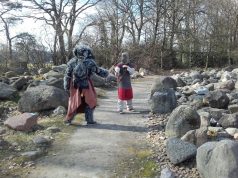