Home english articles The Pyramids of Giza in Egypt 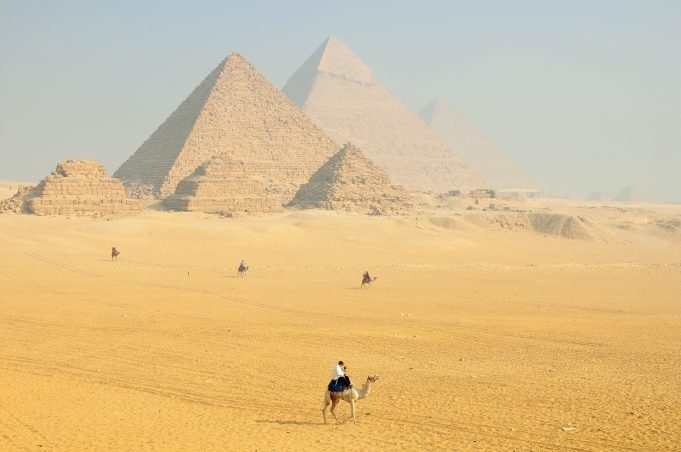 To the west of Cairo, on the border between the Sahara Desert and the Nile Valley, lies the plateau of Giza. Here stand the famous Egyptian Pyramids and the statue of the mighty Sphinx. These days the houses of Cairo almost reach the edges of the complex. The pyramids were built in the middle of the third millennium BC by the pharaohs who are usually known as Cheops, Chefren and Mykerinos. Even in ancient times the pyramids were considered to be one of the Seven Wonders of the World and today their perfect shapes and remarkable construction still arouse wonder and astonishment. 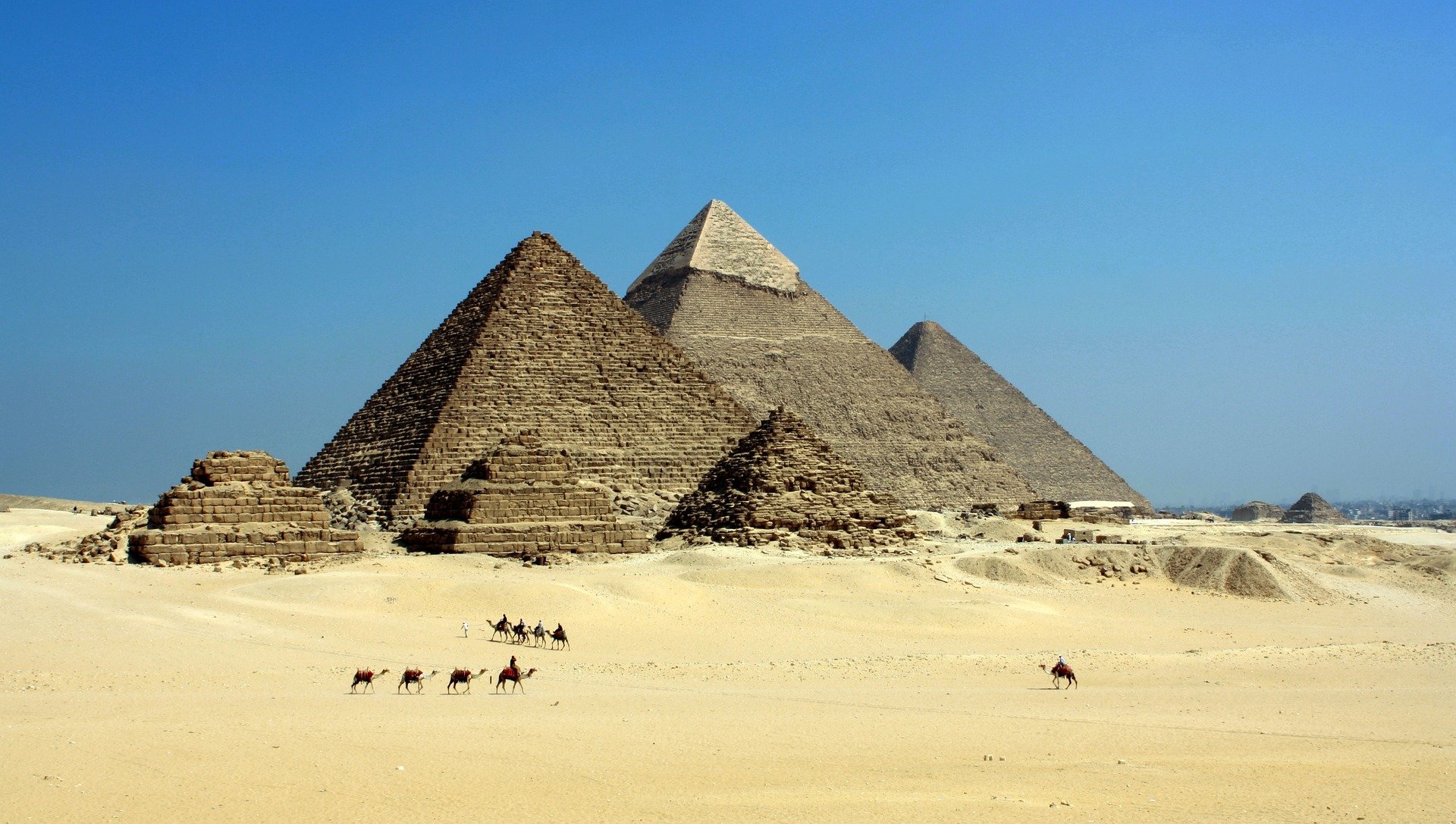 Although they are certainly the most famous pyramids in Egypt, they are not the oldest. Along the edges of the desert between Giza and Maidum, 80 kilometres to the south, there are more than 30 pyramids dating from the Old and Middle Kingdoms. Although most are now in a dilapidated state, they still offer a spectacular panorama from Cairo on a clear day.

The pyramid of Djoser at Saqqara was one of the first attempts at building a pyramid and it was clearly built in tiers. Experience quickly taught that it would be better to build a pyramid with straight sides. The breakthrough to the classic pyramid design came during the reign of King Snefru, founder of the 4th Dynasty. The pyramids on the Giza Plateau represent the architectural high point of the Egyptian pharaohs.

The building techniques used here have always been a mystery. There are many theories but we still do not really know how the work was actually done. However, the picture is gradually becoming clearer.

The building site was first levelled and then a flat plateau was laid over solid rock. On top of this the plan of the pyramid was laid out. After the underground chambers were dug, horizontal layers of stone blocks formed a solid core. At the same time, the shining white limestone cladding was applied. The blocks of stone came from nearby, but the white limestone covering was brought by boat from Tora on the eastern bank of the Nile. The limestone for the pyramid of Cheops came from a number of places in the area. The stones were probably dragged up a slope with the help of sledges and rollers.

The top of the pyramid could not be built via a slope, and it is probable that steps were used instead. To do that, the architects probably used the levers which are mentioned by Herodotus. He also reported that more than 100,000 men worked on the pyramid, but recent research suggests that around 20,000 men worked here for twenty years. They comprised 5,000 specialists supported by an unskilled workforce. The camps for the workers have been discovered very close to the pyramids. It was previously thought that slaves were used but this now appears not to have been the case. The workers received good food and even had health care.

Pyramid of Cheops or Khufu

This is the largest of the pyramids on the plateau and was originally 230.38 metres long and 146.59 metres high. Since the Middle Ages the Pyramid of Cheops, like all of the other pyramids, has been used as a ‘stone quarry’, which is why its length has been reduced to 227.5 metres and its height is now only 137 metres.

The original pyramid had 210 layers which required a total of more than 2 million blocks of stone covering 2.6 million square metres. The bottom layers were covered with granite and the rest with white limestone. 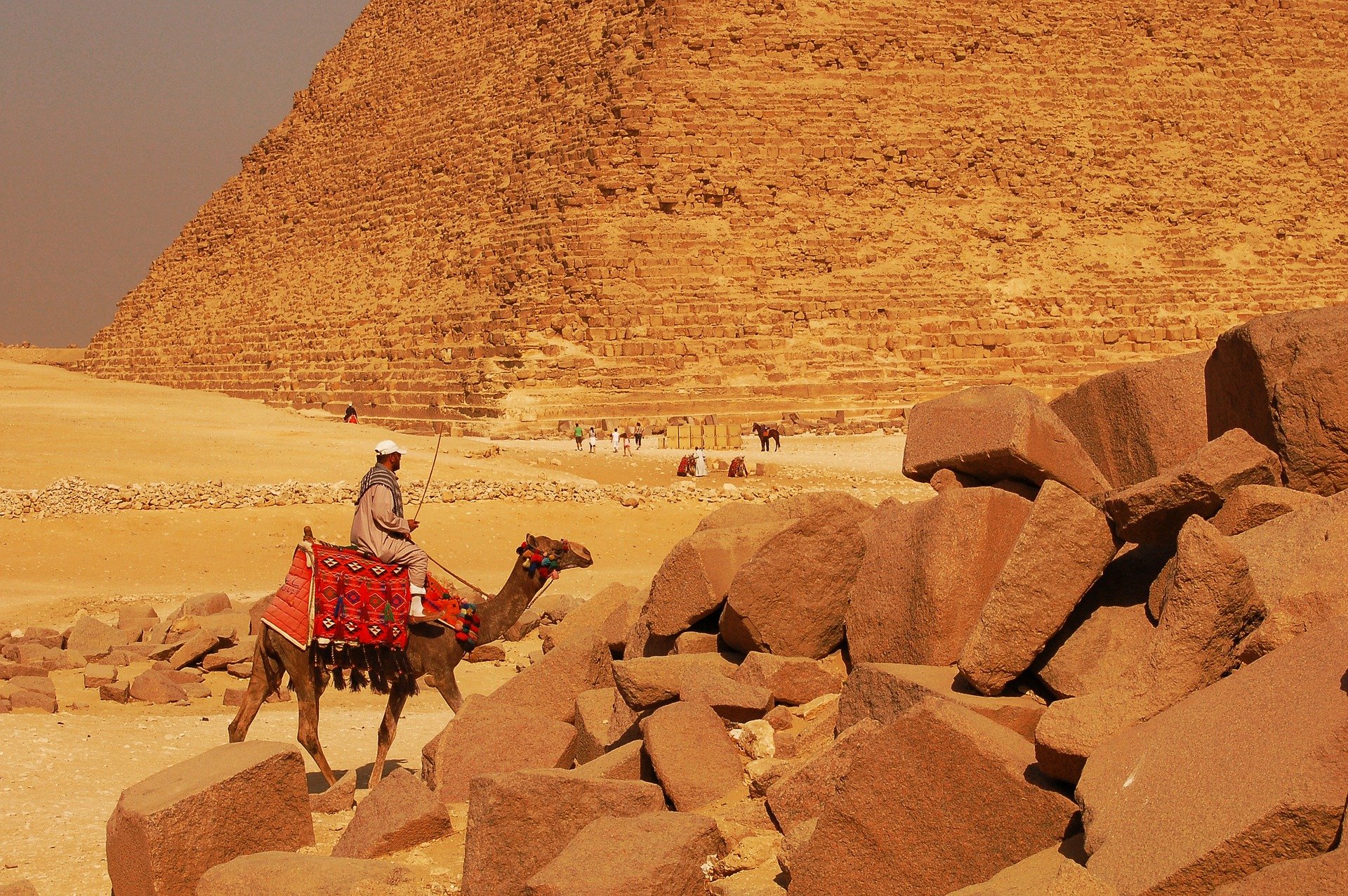 The entrance on the northern side of the pyramid was covered by large jagged blocks, which kept it hidden until the Middle Ages. The present entrance is a few metres lower through a hole which was made by grave robbers. It seems that these robbers were familiar with the internal layout of the pyramid because after 40 metres their tunnel meets the actual entrance shaft.

The passage to the rock chamber, which lies 35 metres under the ground, is closed to visitors. The large so-called Queen’s Chamber at the end of the Grand Gallery is also closed.

The monumental Grand Gallery itself, 47 metres long, takes your breath away with its walls of polished limestone supporting an enormous vaulted ceiling. The gallery leads up to the King’s Chamber at a height of 43 metres. Here the walls are covered with red granite and in the chamber stands the empty granite sarcophagus. Cheops’ mummy has never been found.

Close to the Pyramid of Cheops stands the Boat Museum which holds the boat – 43 metres long and almost 5 metres wide – which probably brought the furnishings for the tomb, and perhaps even the body of the king himself, to the pyramid.

The Pyramid of Chefren or Khafra

Chefren was probably the son of Cheops. His pyramid is slightly smaller than that of Cheops and can easily be recognised by the well-preserved limestone cladding at its apex. Just as in the Pyramid of Cheops, the two lowest layers were clad with granite and the others with shining white limestone. To the east of this pyramid, which was once surrounded by a 10 metre broad covered path, lie the enormous blocks of the Mortuary Temple. A passageway almost 500 metres long, with limestone walls, once linked this to the Valley Temple at the edge of the fertile land.

The Pyramid of Mykerinos or Menkaure

This is the third of the large pyramids on the Giza Plateau. It measures 102.2 by 104.6 metres and is “only” 66 metres high.
The granite cladding of the bottom third is still present, above that the pyramid was covered with white limestone.
When the tomb chamber was opened in 1837 the remains of a mummy (probably that of Pharaoh Mykerinos) was found here. A basalt sarcophagus was also found, but this was lost when the boat taking it to a museum in England sank. To the south of the pyramid there are three smaller pyramids, and to the east are the remains of a Mortuary Temple and a passageway.

It was long thought that this monumental figure, with the body of a woman and the head of a lion, depicted the pharaoh Chefren. It is now believed that it was the guardian of the Temple of the Sun, which stood to the east of the Great Pyramid of King Cheops.

Between the claws of the 73 metre long and 20 metre high figure stands the sculptured limestone votive stela of Pharaoh Tuthmosis IV.

Throughout history much research has been carried out into the history of the Sphinx. It may well be, for instance, that the Sphinx is much older than the pyramids and that the human head was added later. No doubt the research will continue. 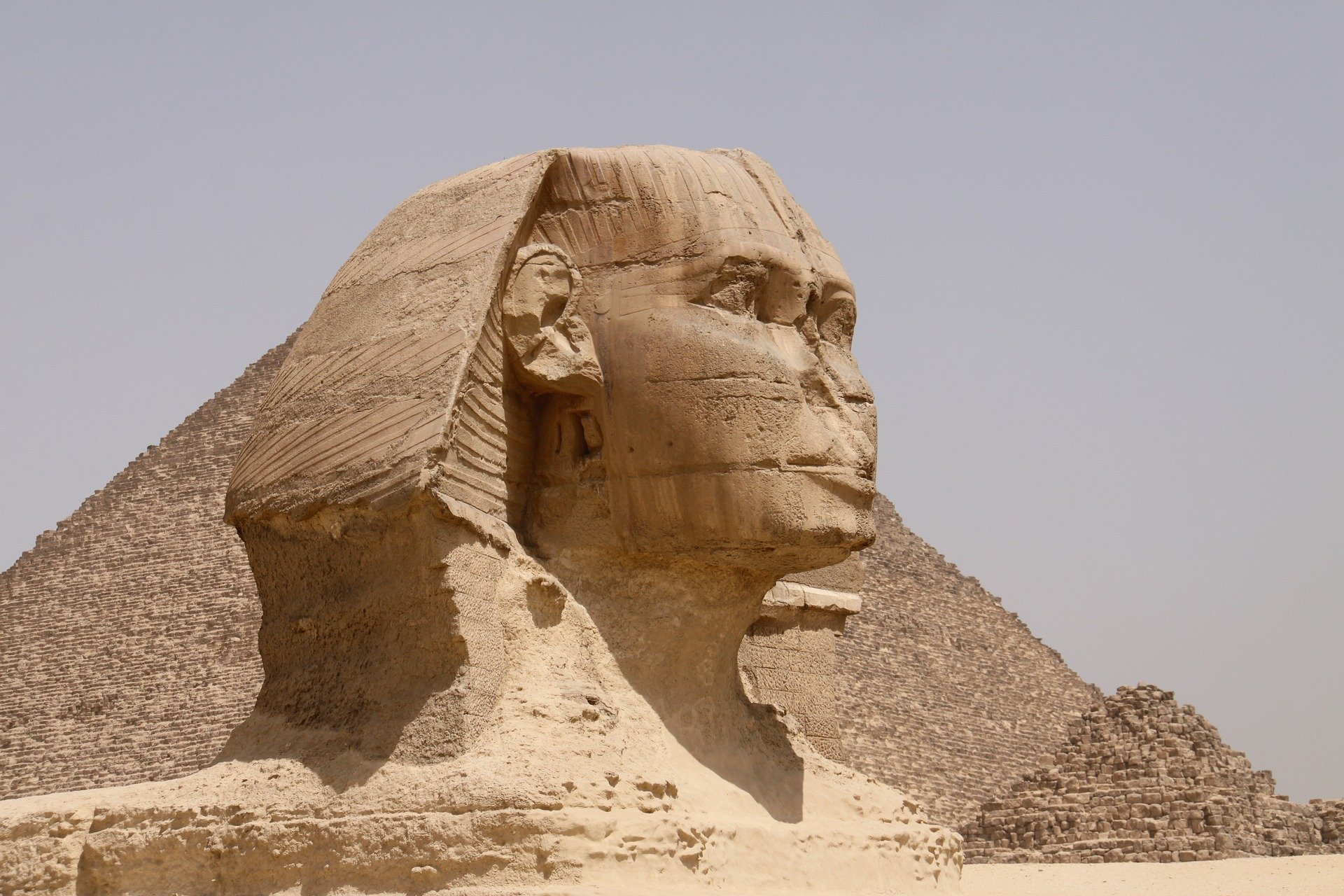 This whole site has always concealed many secrets. Every year new discoveries are made which help to complete the story. But it remains one of the most mysterious places on Earth.