Kilmartin Glen on the west coast of Scotland is the largest prehistoric site in Britain. Within a radius of 10 km there are over 800 ancient monuments, 150 of which are prehistoric. Most date from the Bronze Age and include stone circles, standing stones, cists and a “linear cemetery” with several burial cairns. Many of the monuments, as well as many natural rocks in the area, are decorated with cup and ring marks

The entire area is rich in history. On Loch Awe to the north at least 20 crannogs dating from around 300BC have been discovered. (A crannog is a settlement on water, often built on an artificial island). Just to the south of Kilmartin is a hill called Dunadd which was the first royal capital of Scotland in the 1st century AD.

The glen or valley of Kilmartin is the site of one of the last remaining raised bogs in Britain. 10,000 years ago the area was covered in ice, and when the ice melted, rising sea water flooded the area. When the sea retreated, the area became a shallow freshwater lake or loch which gradually filled with dying and decaying plants to form peat. This peat layer is now 3 metres deep and is home to many kinds of bog-moss or sphagnum as well as heather and other plants.

In the middle of the bog is a prominent hill called Dunadd which was first occupied in the 6th century AD by people who came from Ireland. They were called Scotti and Dunadd became the royal capital of the earliest Scottish kingdom. Traces of walls, terraces, markings and inscriptions can still be seen and archaeological finds have included moulds and crucibles which were used for making items such as pins and brooches.

Kilmartin Glen is known to have been occupied for 7,000 years. The three earliest Beaker pots ever found in Britain were found in one of the graves here, evidence of contact with people in Europe. 4,000 years ago. These pots and other finds can be seen in the small museum in Kilmartin village, which is the best place to begin your visit.

Most of the prehistoric monuments stand close to the main road south of the village and are easily accessible. The locations are shown on the map and the descriptions below run from north to south. If you don’t have time to visit all the monuments, the most unusual and impressive are the cairns and standing stones at Nether Largie (part of the ‘linear cemetery’) and the Temple Wood stone circles.

This cairn was excavated in 1864 when two concentric stone circles were discovered. A model of the excavated site in the museum shows how the stone circles were covered with layers of small stones, There were two cist burials in the centre and finds included a jet necklace and a decorated bowl.

These three cairns form part of the so-called linear cemetery which stretches 5 km along the valley. The North and the Mid Cairn date from the Bronze Age but the South Cairn is older. It was first built in the Stone Age and renewed in the Bronze Age, perhaps when the two other cairns were built.

This cairn was excavated and almost entirely rebuilt in the 1930’s. The central cist was covered with a capstone which was decorated with about 40 cup and ring marks and carvings of two axe-heads. It is thought that this could possibly be an even older standing stone which was re-used here.

By the time this cairn was excavated in 1929, much of the stone had already been removed and used for roadbuilding. It is around 30m across, and was originally 3 metres high. The kerbstones around the perimeter can still be seen. Two cists were found here, one with cup marks and a carving of an axehead, suggesting that it may have been the burial place of a high-ranking individual.

Nether Largie South is the oldest monument of the linear cemetery and was built about 5,000 years ago. The cairn had a passage at its centre, similar to a hunebed, and was in use for over a thousand years as a burial site. The internal chamber is over 6m long, around 1.7m high, and 1.8m wide. It was divided into four compartments and probably held numerous burials. Two cists were found to the south of the cairn and finds here include Neolithic pottery and arrowheads. In the Bronze Age the cairn was remodelled into a circular shape, presumably to match others being built in the glen at the time. At that time it was used for two more burials in stone cists.

This is an X-shaped monument of five large stones, almost 3 metres high, arranged in pairs 70 metres apart with a single stone in the middle. The stones are aligned north east to south west, as are other monuments in the glen. Recent analysis suggests that the Bronze Age farmers were marking the movements of the sun and moon. The stones line up with the midwinter sunrise and the autumn and spring equinox sunset.

The large central stone is marked with 23 cup marks, or circular depressions, three of which have signs of surrounding ring marks. Many stones in Kilmartin Glen bear cup and ring marks but it is not known why or even when they were carved.

The site consists of two circles (north and south), both of which are filled with rounded river stones. The northern circle is the smaller of the two and has a single upright stone at its centre and another at the edge. This was probably first laid out about 5,000 years ago as a timber circle. The southern circle was built later and is roughly 12 metres in diameter. It contains a ring of 13 standing stones and in the centre is a burial cist surrounded by a circle of stones about 3 metres in diameter.

It is thought that the site was in use from some time before 3000 BC until the Bronze Age, ending about 1000 BC. It was used as a place for ritual ceremonies and the northern circle was apparently constructed to align with the mid-day sun on the winter solstice. Standing in the northern circle, the midwinter sun would set over the southern circle.

A little further south along the main road stand the other two cairns which form the linear cemetery. Very little is left of Ri Cruin Cairn which was used for gravel extraction and as a lime kiln in the 19th century. It has been excavated three times, the latest in 1936, and among the finds were burned bone and other possible human remains.

Dunchraigaig Cairn may well be the oldest grave in the area and excavations in the 1800’s found that at least 8 or 10 people were buried here. Finds here included cremated bones and an unburned body, and also found nearby were a whetstone for sharpening metal, a stone axehead and a flint knife. Unfortunately all these finds, and the bones, have long since disappeared.

This is the most southerly of the prehistoric monuments in the glen and comprises an avenue of standing stones, a stone circle, and a henge with a small burial cairn. The tallest stone is 4 metres high and two of the stones are carved with cup and ring marks.

These monuments can all be seen in one day but anyone really interested in prehistory could easily spend a few days exploring the area. Together with the beautiful scenery, the lochs, the Highlands and islands such as Skye and Islay, not forgetting the many whiskey distilleries, the west coast of Scotland is an ideal destination for a family holiday.

Photos Alun Harvey (except where noted) 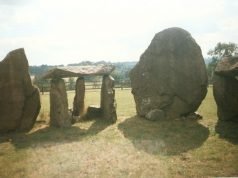 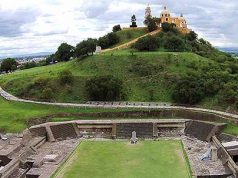