In the 7th century BC the Greeks established a colony in the south of Italy called Poseidonia. Two hundred years later the city was seized by the Lucanians from further south. Much later, in 273 AD, the Romans occupied the city and gave it the name of Paestum. The ruins of this ancient and attractive site stand near the coast just 75 km south of Pompeii, and yet the area is hardly known and attracts far fewer visitors.

Yet Paestum is regarded as one of the most important archaeological sites of the Greco-Roman period. Its reputation comes partly from the well-preserved temples but mainly from a discovery made in 1968 – the Tomb of the Diver. This tomb contains the oldest known Greek wall paintings.

Wall paintings in the Tomb of the Diver

The frescoes are perfectly preserved. They were painted in 480 BC and show among other things a feast with half-naked men with garlands in their hair. A painting on the lintel is remarkable and shows a man diving from a tower into the water. Other images include a man playing the flute, another pouring wine and reclining figures.

The complex contains a network of small streets in which the original Greek street plan and the later Roman layout can be recognised. The sea god Neptune or Poseidon was honoured in the city, and later also the gods Hera and Athena. Two large temples stand close to each other, one to Neptune and the other, known as the basilica, to Hera. They formed part of a large sanctuary.

The first temple was the oldest religious structure in Poseidonia, built between 550 and 530 BC.

Further along the Via Sacra, behind the forum and the ruins from the Roman period, stands the temple of Ceres, which was actually devoted to Athena. This was built around 500 BC.

Paestum also contains the remains of several other temples as well as a small amphitheatre, thermal baths and residential districts. On display inside the museum are the results of decades of research. These include a reconstruction of the Doric treasure chamber of 540 BC and finds from the later sanctuary of Hera, as well as statues, bronze urns and pottery.

One of the most common pottery votive offerings, found here in large quantities and unique to Paestum, was the woman flower. Made of terracotta, women flowers consist of the bust and head (or sometimes just the head) of a woman, topped by the calyx of a bell-shaped flower. This represents the wild lily which still grows on the nearby sand dunes. Dating from the 4th century BC, this would have been used as a censer during sacred rituals.

This peaceful site, with very few visitors, is a complete contrast to Pompeii and an ideal place to spend a day. And for lunch, the Ristorante Nettuno is right by the car park and the Porta Giustizia entrance and offers splendid views of the temples of Neptune and Hera. 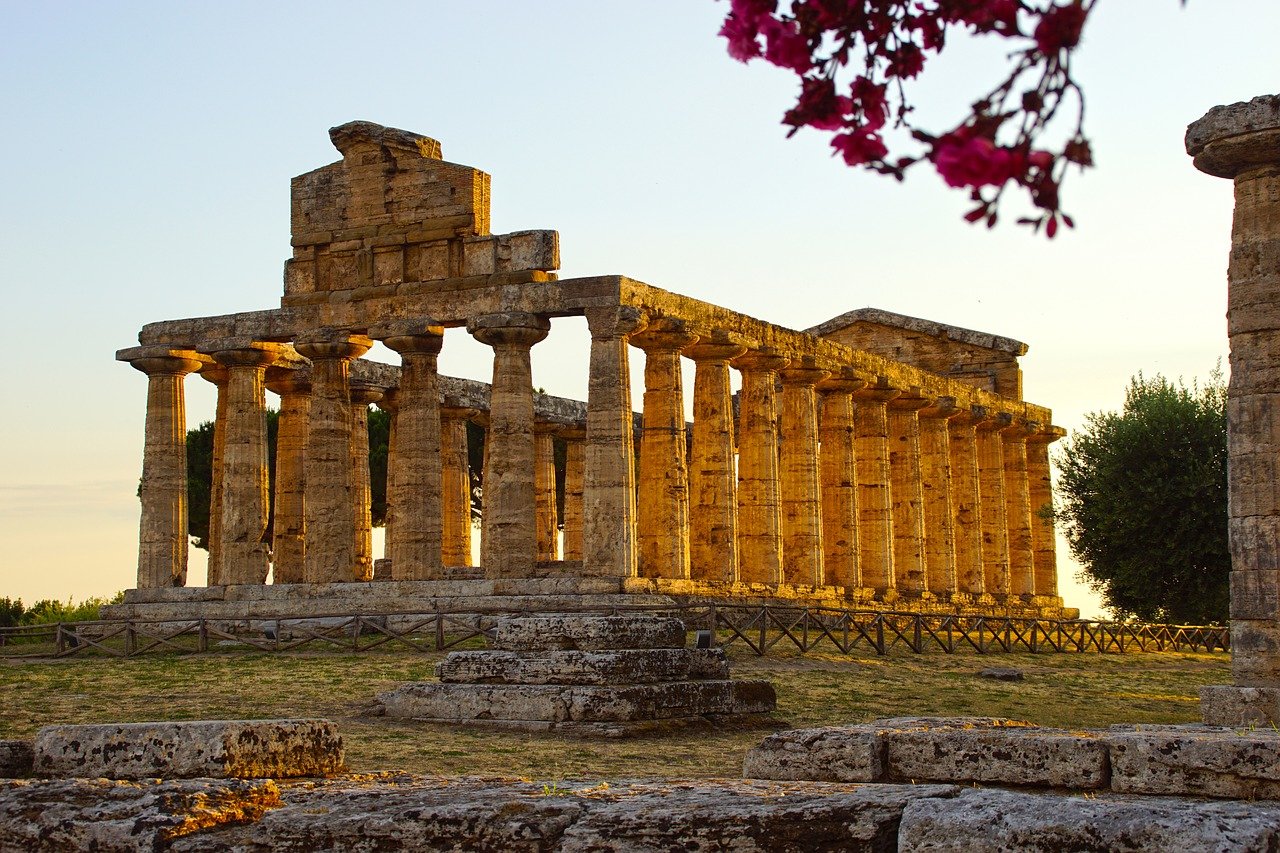