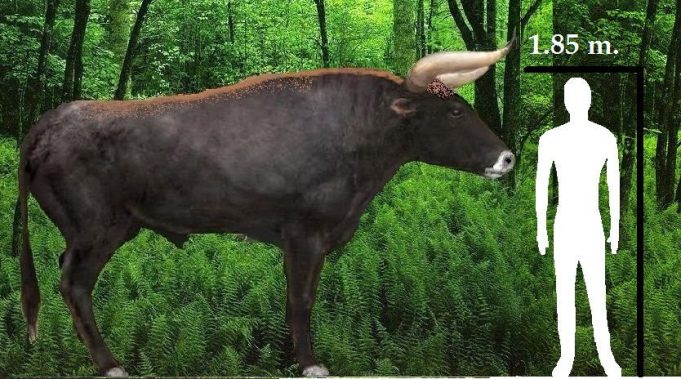 The animal which we know today as the cow is descended from the aurochs, an extinct species of large wild cattle that inhabited Europe, Asia and North Africa. The oldest aurochs remains have been dated to about 2 million years ago in India. During the Pleistocene the species migrated west, reaching Europe about 270,000 years ago. The word aurochs derives from the German for ‘ancient ox’ while the Latin family name Bos gives us today’s word ‘bovine’. The aurochs family comprised three sub-species – Bos primigenius primigenius found in the Middle East, Bos primigenius namadicus (India) and Bos primigenius africanus (North Africa)  (TIKHONOW, 2008).

As late as the thirteenth century aurochs still lived in parts of Lithuania, Moldovia, Romania, Poland and Russia (The Extinction Website, 2007). The animals were hunted to extinction and the last known aurochs, a female, died in 1627 in the Jaktorów Forest in Poland (GRUBB 2005).  This article will try to recreate the aurochs based on what we think it looked like.

Aurochs, ancestor of the cow

The aurochs was a bit larger than today’s cattle. The shoulder height for a male was between 160 and 185 centimetres and for a female about 150 cm. A bull could weigh up to 1,000 kilos. The male was black to dark brown in colour with a narrow light stripe along his back (known as an eel stripe) and a white ring on the nose and chin, but cows and calves were reddish brown. The horns were typically about 80 cm, bent inwards and facing forwards. The udders were small and barely visible.

Aurochs lived throughout Europe, apart from Ireland and the north of Scandinavia. They lived mainly in humid areas such as swampy woodland, rivers and salt-marshes. The buffalo, by contrast, lived in woodlands in drier areas.

Aurochs and man from prehistory to now

Ever since the Early Stone Age the aurochs was hunted both by Neanderthals and men. This is borne out by magnificent cave paintings, such as those at the famous cave of Lascaux in France. The animals were also hunted in Ancient Egypt and the Romans caught them alive to use them for fighting in the arena.

In the 1920’s and 1930’s the German zoologist brothers Ludwig and Lutz Heck tried to breed aurochs again, resulting in Heck cattle. However, it is generally agreed that today’s Spanish fighting bulls are closer to the aurochs in colour and in the shape of the horns. In the 1990’s new efforts were made to breed aurochs, the best known being the Taurus cattle in Germany.

Cattle and man from prehistory to now

The cow, or Bos taurus, is a domesticated form of the aurochs, dating from around 10,000 years ago in the Middle East. Domesticated cattle first appeared in the Netherlands with the hunebed builders. They were valuable not only as a source of meat but also of milk and leather and for their pulling power. Cattle were one of the most important producers of foodstuffs and that is one reason why they were often used in rituals. Archaeological finds such as the drawing of an ox on the Neolithic Bronocice pot from Poland and the horns from the Temple of Bargeroosterveld in the Netherlands clearly illustrate the special role played by cattle.

Ever since man began cultivating fields and breeding cattle about 10,000 years ago, cattle have been used as a method of payment (DAVIES 2002). This still happens in some parts of the world today with cattle, and also with other animals such as goats and camels. This is because animals can be used to set a fixed price.

Cattle supply meat and many parts of the animal can be used as food, from the blood to oxtail, liver, heart and kidneys. Cattle produce milk which can be turned into cheese, yoghurt, butter and other dairy products. The skins provide leather and are also used for decoration. The leather can be processed for making shoes, clothing and chairs. Cattle are also used in bullfights and rodeos.

In prehistory, oxen were an important source of power. Still today oxen are used for ploughing fields, grinding corn, as transport for people and products, and to drive machines. Oxen are more powerful than horses and are less liable to injury. At this moment there are almost 1,500,000,000 cattle in the world, clear proof of their importance to man. 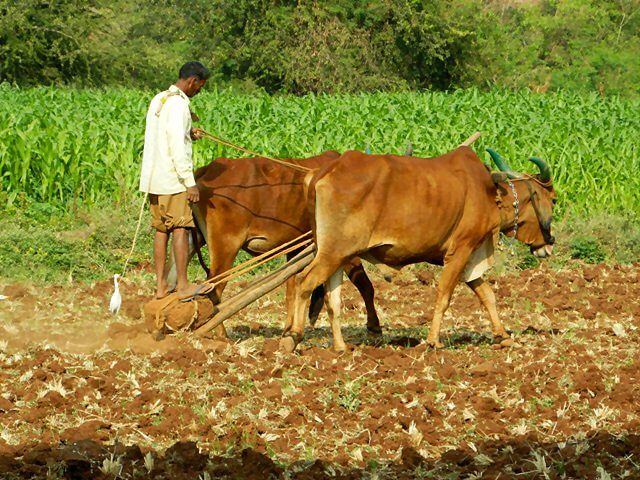 Unlike goats and sheep, the ancestors of today’s cattle were to be found living wild in the Netherlands. But it seems that the domestication of cattle took place somewhere else. Bones of cattle found in excavations are similar to those of aurochs. Archaeo-zoologists look closely at the size of the bones and the muscle joints to see if they relate to aurochs or cattle.

DAVIES, G. & J.H. BANK, 2002. A history of money: from ancient times to the present day. University of Wales Press.