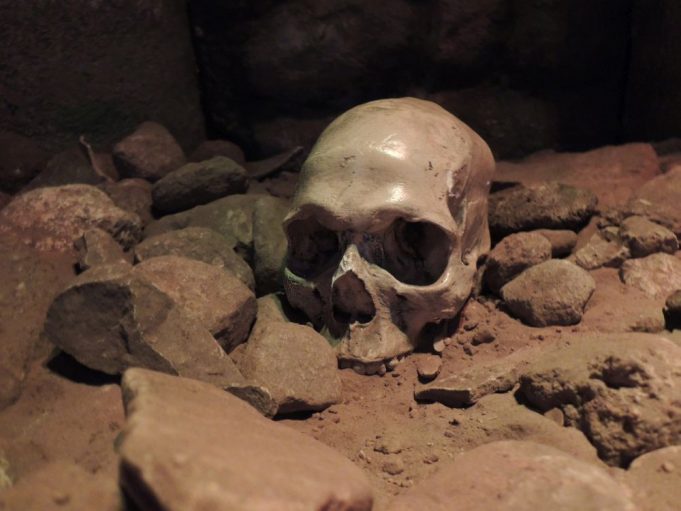 Archaeological excavations reveal many things such as soil traces and finds of objects. Differences in soil colour can indicate the position of post-holes or complete buildings. Objects can include pots (often broken into shards), utensils, pieces of clothing, coins and the bones of animals and people. The process of examining human bones is called ‘physical anthropology’. The researchers are specialists and can often gain a lot of information about the people themselves such as their age, sex, height, illnesses and disabilities.

The research which can be carried out depends on the type of material found, for example whether it is a whole skeleton or separate bones, and whether the skull, pelvic bones or complete arm or leg bones are present. First the bones are examined and separated depending on whether they are animal or human. Animal bones are then examined in detail by another specialist, the zoo-archaeologist. It is also important to establish whether the bones are burnt, which might indicate cremation. In that case the bones are often deformed, but some information can still be gathered from looking at specific characteristics.

When bones are present, the researcher can try to answer the following questions:

The age of the person can be determined by looking at growth characteristics (e.g. size of the bones or skull) and deterioration in the bones. Important information can be gained from the skull by examining the teeth and sutures (at an advanced age the seams between the bones of the skull are no longer visible). Other indications come from the length of the arm and leg bones and the wear and tear or deterioration of the teeth and the fusion of the layers.

The sex of the person can be determined by looking at the pelvis (hip bones), the skull and the thigh bones. Where these bones are missing, information can sometimes be obtained by studying the muscle attachments, although this is not always a reliable guide. However, taking all these elements together can provide a fairly accurate result.

The sex of children cannot be determined because bones only develop completely after adolescence.

The pelvic bones provide the clearest proof for determining sex. In women the shape of the pelvic opening is more rounded and oval. This difference in shape results in a larger birth canal in women. The researcher looks at a number of features, awarding points to each one, and the end result enables the sex to be calculated. The pelvic bones can also tell us whether the woman has had a baby.

Examining the skull can reveal the sex with a 95 per cent certainty. In men, the bones are rougher. Just as with the pelvic bones, particular features of the skull are examined and awarded points, from which the sex can be calculated. Some bones can easily be examined by feeling them, such as the superciliary arch of the eyebrows (which is higher in men), the forehead (more vertical in women) and the bones behind the ear and at the back of the head, which are rougher in men.

3. How tall was the person?

The height of a person can be calculated by measuring the length of the long bones in the arms and legs, particularly the thighbone. In doing this, the researcher makes an allowance of 10 cm for the connective tissue. Of course, determining the length is far easier if the find is a complete skeleton.

4. Where does the person come from?

The skull can provide clues about the area where the person came from. Remarkably, people from the Mediterranean area differ from people originating further north in Europe.

Bones can also tell us if the person had suffered violence during their life or even if that was the cause of their death. Signs of this kind might include the mark left by a blow, knife wounds or even a hole made by an arrowhead.