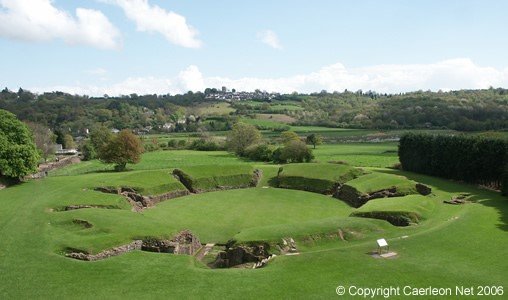 The small town of Caerleon in South West Wales is important for two reasons – firstly because I was born there; and secondly, and of far greater importance, as the site of a Roman legionary fortress or castra built in AD 75. One of only three permanent fortresses in Roman Britain, it was the headquarters for Legio II Augusta for about 200 years. The Romans called the site Isca after the River Usk (Welsh Wysg) and the name Caerleon may derive from the Welsh for “fortress of the legion”.

The excavated Roman remains still to be seen in Caerleon include the most complete Roman amphitheatre in Britain, part of the military bath house and the only remains of a Roman legionary barracks on view anywhere in Europe

The oval amphitheatre was built around 90 AD and is 60 metres (184 feet) long and 40 metres (136 feet) wide. Divided into eight sections by entry passages, it provided seating for over 6,000 spectators, far more than the Roman population of the garrison at that time. Halfway along the oval on each side were seats of honour for VIP’s, just like the royal boxes in modern theatres. Below the seating areas were small chambers where the participants – human or animal – waited to enter the arena. The amphitheatre was not only used for blood-sports and entertainment but also as a parade ground for the legion.

Within the small town centre at Caerleon there are two museums: the National Roman Legion Museum tells the story of the Romans in Wales and contains archaeological finds from the fortress, amphitheatre and surrounding area; while in the nearby Roman Baths Museum visitors look down from a covered walkway onto the remains of the actual military bath house. This bath house originally consisted of a frigidarium, a tepidarium and a caldarium as well as an open-air swimming pool. The complex could be compared to a modern-day leisure centre or spa with heated changing rooms, cold and warm baths, swimming pool and covered exercise rooms.

About 20 km (12 miles) from Caerleon is the small village of Caerwent. This was the only town founded by the Romans in Wales and was established in AD 75 as Venta Silurum. Unlike Caerleon’s role as a military site, Venta Silurum was designed as a civilian administrative centre and market town for the Romans and the defeated local tribe, the Silures. Later the town became known as Caerwent or “the castra/fort of Venta/Gwent” and the name Venta is commemorated in the name of the present-day Welsh county of Gwent.

Like all Roman towns, Caerwent would originally have had a forum and a basilica as well as a market place and shops. Remains of farms and dwellings, some with courtyards, have been excavated here, along with a Roman temple which might have been dedicated to Mars.

Large sections of the defensive walls still stand, rising up in some places to a height of 5 metres. Excavations in 1881 revealed part of a highly intricate coloured floor mosaic depicting different types of fish. More recent research in 2008 found a row of narrow shop buildings and a villa with painted walls, frescoes of Roman art and mosaic floors. Among the artefacts excavated were a bone penknife hilt depicting two gladiators fighting, coins, Roman glassware, ceramics, human and animal bones.

The remains on view at Caerleon and Caerwent provide the visitor with a vivid picture of life in second-century Roman Britain.