The old Roman city of Jerash was only discovered by an archaeologist in 1806. It was covered by an enormous pile of sand, part of which has since been removed. A large part of the old city lies beneath the modern city and is difficult to excavate. Research suggests that the place has been inhabited since the Bronze Age. Since then it was enlarged several times until in the Roman era it had expanded to be one of the ten largest cities in the world.

The most important temple at Jerash was the Temple of Artemis, an enormous structure measuring 161 by 121 metres. The temple was dedicated to the Greek goddess Artemis: daughter of Zeus and Leto, patron saint of Jerash and goddess of the hunt and fertility. The temple is impressive because of its size and because it stands on a hill which can be seen from everywhere in the city. Today the temple is in ruins because of earthquakes and climatic conditions, but the most imposing part is still almost intact: eleven out of the twelve metres-high columns are still upright. For that reason this temple is rightly the symbol of Jerash.

The Temple of Zeus covers a smaller area than that of his daughter Artemis, but is no less imposing. The temple was built in the year 162 AD on the foundations of a Roman house of prayer, which in its turn had replaced an earlier Greek temple. The Temple of Zeus also lies higher than the rest of the city and offers a wonderful view over the ruins. The temple was originally surrounded by giant columns, a few of which have now been replaced in an upright position, although not always in the right place. The structure was linked by a staircase to a lower square.

The Cardo Maximus was the main street of Jerash, a broad street with an impressive line of columns on each side. The 800 metre long street links the northern entrance gate with the Temple of Zeus in the south. This was formerly the place where the inhabitants did their shopping at little shops and market stalls, and even today the street still leads visitors past all the important tourist sites. You should not forget to pay attention to the street itself, because this is where the history of Jerash really comes to life.

So far 15 churches from the Byzantine era have been found in Jerash, but it is thought that many more treasures lie hidden under the sand. Of the churches which have so far been uncovered, the three worth visiting are those of the holy Saint Joris (George), Saint John the Baptist, and Saint Cosmas and Saint Damianus. These churches share the same entrance and date from the same period. Both have the fine mosaic floors typical of Byzantine churches. 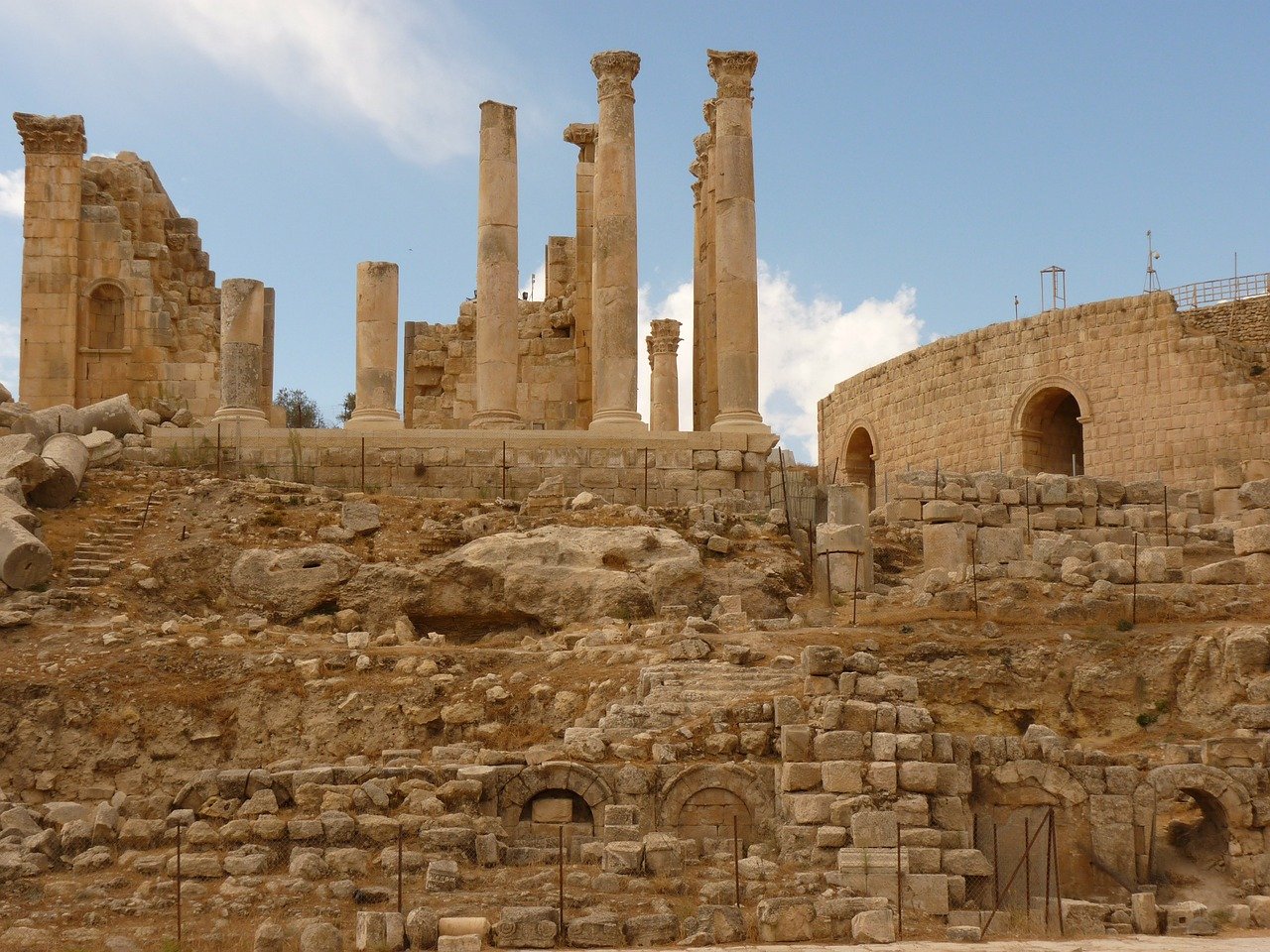 The Hippodrome is an ancient sports field, dating probably from the 1st to the 3rd century AD, and lies close to the southern entrance gate. Around the field there was seating for 15,000 spectators and today, in the place where athletics competitions and horse races were formerly held, you can enjoy a modern interpretation of its history. Twice a day there is a show with Roman costume, gladiators and swords, and you can witness a spectacular chariot race.

The old Jerash was a wealthy city with many inhabitants. There were enough people to fill two theatres: one in the north of the city, the other in the south. The theatre in the south had space for 5,000 people and today, thousands of years later, the acoustics here are still amazing. Whispers can be heard and understood on the other side of the theatre. Every year the old theatres form the backdrop for the Jerash Festival, a cultural festival in which theatre companies and musicians perform in the old city.

Oval Plaza lies at the foot of the Temple of Zeus and encloses an enormous square about 90 metres long and 80 metres wide. It is surrounded by 56 columns and is a great place to take pictures. It was long thought that the square this was a marketplace, but archaeologists now believe that it probably formed part of the Temple of Zeus.