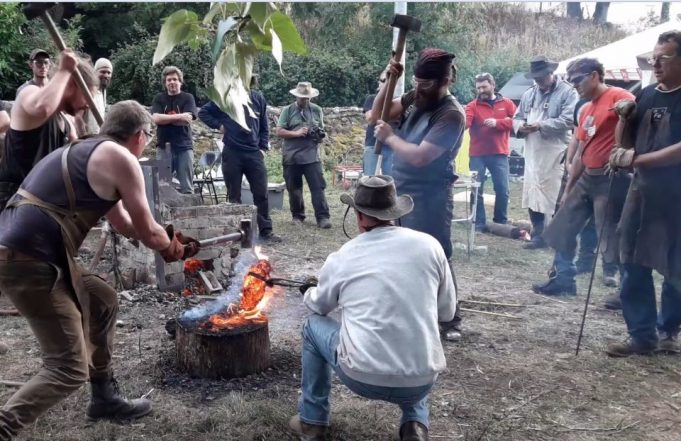 The “members of the iron smelting group” at the “Hunebed Centrum Borger” are already for some year’s now extracting iron from ore, following a method dated back to the ”iron age“.

The “iron period” starts in western Europe around 800 BC and ends around the Roman period. Iron can be found as iron ore in rocks but  also in the near subsurface as bog iron, transported as a solution by water and deposited. Depositing the iron goes quite fast – not centuries are needed but a few decades are sometimes enough for famers to decide removing the iron containing banks, a few feet beneath the surface of their land.

Here in Holland, as in several other parts of Europe, the basic method of extracting iron from bog ore was very simple, using small sized smelting furnaces.

Keeping this practice and skills “alive” is done regularly  at the “HunebedCentrum”,  at various other places in Europe – and also outside! There are only a few smelters per country and it is always a fest to meet in a festival and share our experiences.

So we did this year -2018- also in Woodford, Galway (Ireland) in August, a place with a rich history in producing iron. On a very nice field next to a small artificial lake. This reservoir was in the 17th century to power a blast furnace for iron production.  Woodford was ‘The Village of the Iron Mills.’