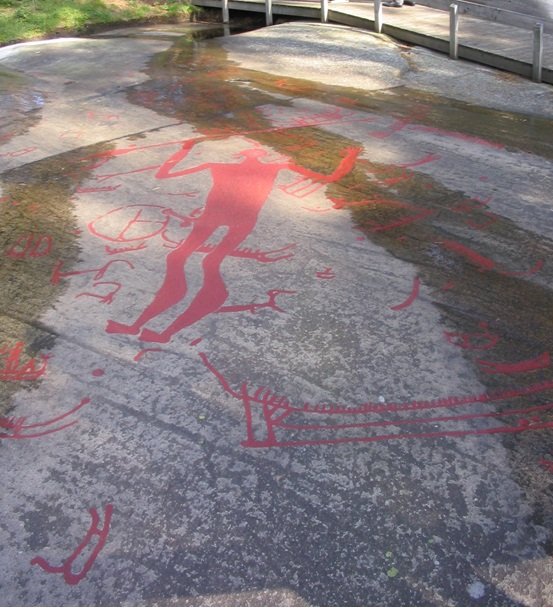 In 1994 the rock carvings (petroglyphs) at Tanum in Southwest Sweden were listed as a UNESCO World Heritage Site. The oldest images date from the Bronze Age about 3,700 years ago and can be found in four places: Aspeberget, Fossum, Litsleby and Vitlycke. Some of them have been marked with red paint to make them more clearly visible.

The carvings were created over a long period from the Bronze Age into the Iron Age. The site consists of around 500 images spread over 45 square kilometres. They show people, animals, weapons, boats etc and provide an insight into the lives of the people who made them and also tell us something of their rituals and beliefs. During the Bronze Age these rocks stood by the water but today they are around 10 metres above sea level. This was caused by movements in the ice during the Scandinavian postglacial uplift.

The site is in the southwest of Sweden above Gothenburg near the E6 motorway. The museum is in Tanumshede.

Beginning in the museum will give you a better understanding of the figures and their context. You should then visit the sites in the following order: Vitlycke, Asperberget, Litsleby and Fossum. 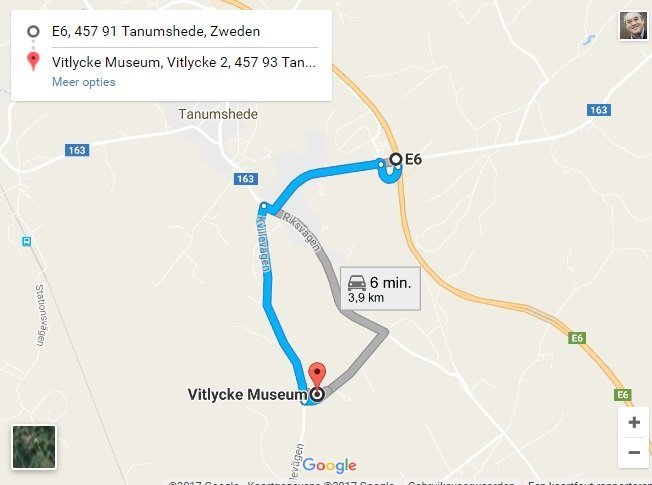 The permanent exhibition tells the story behind the images and explains more about life here in the Bronze Age. It is interesting for instance that bronze was brought here from elsewhere in Europe, which means that trade was important. The museum covers not only the local area but also Scandinavia and other parts of Europe. Displays interpret the carvings and tell visitors more about the people who made them, how they were made and perhaps more interesting, why. But much remains a mystery.

In the open air museum visitors experience the lives of the Bronze Age farmers in two farmhouses dating from different periods. Sheep and pigs wander around, the fields are planted with einkorn, emmer wheat, barley, peas and broad beans.

Taking a walk in the nearby wood brings you to a small sacrificial pool as it might have looked in the Bronze Age. There is also a causeway and a series of carved wooden idols.

200 metres from the museum lie the most famous rocks with around 500 carvings. These were made between 1,700 BC and 300 AD. There are also four smaller rocks with carvings, linked by a 500 metre path. On top of the hill are two cairns (stone burial mounds) from the Early Bronze Age.

An unusual feature is the “bridal couple” of a man and a woman, which may represent a prehistoric marriage. Women are not often shown in the drawings. The rock also has ‘cupmarks’ or round incisions, as well as animals, people and boats.

This site is 700 metres from the museum and is called the “Holy Mountain”. It consists of 20 panels with carvings along an 800 metre path. The “Calendar Man” is particularly remarkable (see below). By his hands there are 29 incisions (“cupmarks”) and it is thought that they represent the days of the month.

The rocks at Litsleby, 2 km from the museum, are dominated by a tall man with a spear. Measuring around 230 centimetres, this is the largest rock carving of a human figure found to date. Researchers believe that the figure could represent a predecessor of the Norse god Odin. The rocks contain around 250 drawings dating from the late Bronze Age and the early Iron Age. Remarkably, the figures here were all first mentioned more than 250 years ago in 1751. Also worth noting is the fact that some of the carvings are not painted red, so visitors can see what they looked like in prehistory. This shows how difficult they are to distinguish, but also how much easier they are to see in wet weather. The best time to visit is in the early morning, when they are still wet with dew, or after a shower of rain.

The rocks also contain images of boats, dating from the Early Iron Age. The oldest figures are reminiscent of the Hjortspring boat from the same period found in the peat in Denmark at the end of the 19th century. The boat was left in the peat as an offering and can now be seen in the National Museum of Denmark in Copenhagen. The link between the boat and the image is important for an understanding of the figure.

Following the path 100 metres further into the woods brings you to the Tegneby rocks. The carvings here show a battle with men armed with spears and shields riding on horseback.

The rock panels at Fossum are some distance further away, five kilometres from the museum. The splendid carvings here number more than 180, placed between the natural contours and splits in the panel. It seems to be a conscious composition planned and made by one artist. Close by is another outstanding figure: a splendid horse with the sun (“Sun Horse”), probably carved in the late Bronze Age.

How to get there

The routes are clearly marked and there is good site plan in the brochure:
http://www.vitlyckemuseum.se/upload/Vastarvet/Vitlycke_museum/Platsh%C3%A5llarsidor/map.pdf.