At the side of the road between the Drenthe villages of Odoorn and Valthe, a burial mound stands in the middle of a field.  You can’t miss it, there are trees growing on top of it and a narrow concrete track leads to it from the road. This is the only remaining burial mound in what was once an ancient cemetery dating from the New Stone Age. It is one of the ‘hotspots’ of the Hondsrug UNESCO Global Geopark, see https://www.dehondsrug.nl/hotspots/eppiesbergje/?lang=en 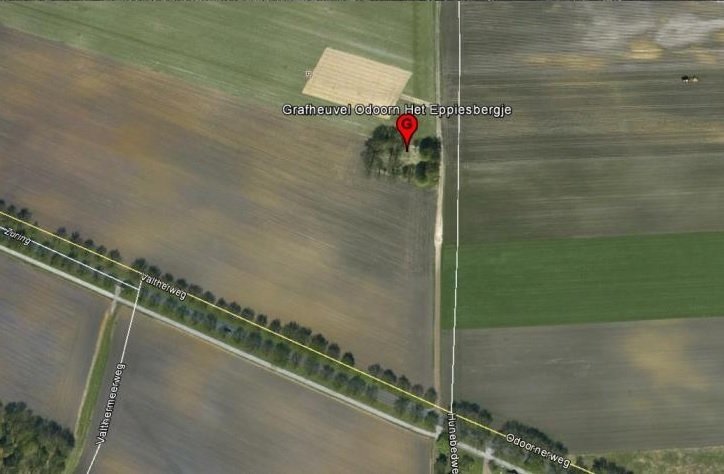 The burial mound (or tumulus) is called the Eppiesbergje or ‘Eppie’s mound’. It dates from the time of the Single Grave Culture around ca. 2850-2450 BC. and was the last resting place for an important man or woman.

Many centuries later, during the Middle Bronze Age (ca. 1800-1100 BC) a second grave was placed inside the mound. At that time the mound was raised higher and reinforced with extra stones. Later in the same period a third person was laid to rest at the top of the mound and a ditch was dug around it.

At that time the mound did not stand alone. Several other burial mounds rose up here during the Bronze Age – first a few large tumuli and later a large urn field. That is where the cremated remains of the local inhabitants were placed in urns and buried under low mounds. This cemetery was part of a string of burial places (hunebeds, tumuli, urn fields) between Emmen and Odoorn. They follow the line of an ancient prehistoric route over the Hondsrug.

In 1937 the Eppiesbergje was investigated by the renowned Groningen archaeologist A.E. van Giffen.

The name Eppiesbergje (formerly Eppies Bargje) is supposed to come from a man called Egbert Vos who was reputedly executed by hanging on top of the mound.

If you return to the Valtherweg and cross over, you will find a small hunebed numbered D34. You can read more about it on this site at https://www.hunebednieuwscafe.nl/2017/10/d34-the-valtherbos-english/