Home english articles Bring your own food to the feast! 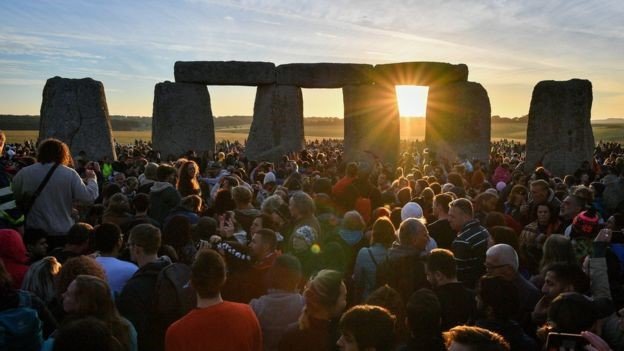 A study published in 2019 in the American journal Science Advances provides further proof that ancient British monuments such as Stonehenge and Avebury acted as focal points for mass gatherings of people. Britons from the far corners of Scotland, England and Wales travelled to central meeting places where they could feast together. And moreover, they contributed to the feasting by bringing their own pigs with them! The pigs were probably driven across the country alive, with travellers stopping along the way to fatten up the animals.

These ‘pilgrimages’ have been uncovered by studying pig bones at settlements surrounding megalithic stone circles and henges, which show that the animals eaten there had travelled vast distances. Dr Richard Madgwick and colleagues from Cardiff University joined forces with Jane Evans and Angela Lamb from the British Geological Survey to examine the bones of 131 pigs from four late Neolithic sites dating from about 2800-2400BC. These sites – Durrington Walls, Marden, Mount Pleasant and West Kennet Palisade enclosures – are all in Wiltshire in the south of England, not far from Stonehenge.

Using isotope analysis of the remains of animals unearthed at the sites, they discovered that the animals had come from Scotland, north east England and west Wales, as well as many other locations across Britain. Isotopes are found in food and water. Over time, they become incorporated into tissue and bone, so providing a record of the area in which the animal or human lived during its formative years.

Although previous studies have shown signs of huge feasts, until now it was unclear where the people taking part had come from. According to Dr Madgwick: “These gatherings could be seen as the first united cultural events of our island, with people from all corners of Britain coming together to feast on food that they had brought with them from their homes. Pigs are not nearly as well-suited to movement over distance as cattle, and transporting them over hundreds of kilometres, either slaughtered or on the hoof, would have required a monumental effort. Procuring them close to the feasting sites would have been much easier”.