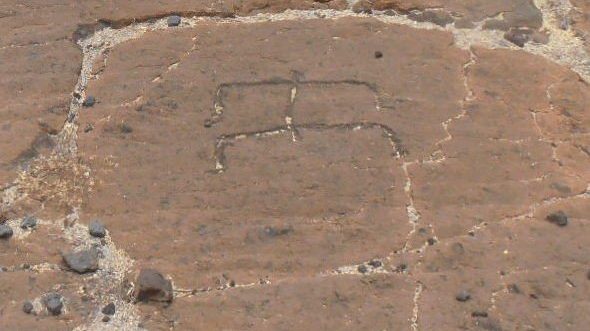 The term ‘prehistory’ usually refers to ancient civilisations such as the Stone Age, but the word really implies ‘a time before written records’. Even before people could write, however – indeed as long ago as 30,000 BC or earlier – prehistoric man seems always to have had an urge to communicate by carving figures on rocks and cave walls. In this respect, therefore, prehistory in the Hawaiian Islands can be considered to have lasted until the 16th century or later.

The US State of Hawaii consists of six islands which lie in the middle of the Pacific Ocean. These are the most remote islands in the world – 3,850 km from the US coastline in California and 6,195 km from Japan. The capital, Honolulu, is on Oahu but the largest is the Island of Hawaii, usually known as Big Island.  The landscape is an astounding mix of greenery and black lava as the island is home to three large volcanoes. The last major eruption was in 2018 and many roads are still blocked by lava flows.

It is not known exactly when the first settlers arrived here but they are thought to have come in sailing boats from the Marquesas Islands in the 5th century. This feat required exceptional powers of navigation as these Polynesian islands are 4,000 miles away. Scientists now surmise that their route followed the direction taken by migrating golden plovers (who themselves fly as far north as Alaska every summer to breed!)

The word “petroglyph”  comes from the Greek words, “petros” for rock, and “glyphein” to carve.  Hawaiians call this form of rock art “k’i’i pohaku“ or images in stone. No one knows exactly when, or indeed why, these images were carved. Some are located near old pathways but the full reasons for their location and creation remain a mystery. Examples can be found on most of the islands and one of the largest collections is in the 94 hectare Puakō Petroglyph Archaeological Preserve on Big Island.

The carvings are a short and relatively easy walk from the car park at Mauna Lani Beach along the Malama Trail, but don’t try it in sandals as it crosses over rough black lava flows and through a forest of kiawe trees which have very sharp thorns. There are a few petroglyphs along the path but most are to be found at the end of the trail on a large area of flat rock. For the benefit of visitors, however, some carvings have also been moved closer to the trail entrance near the car park.  For the best view you should time your visit for the morning or evening when the sun is low.

The preserve contains more than 3,000 different designs and roughly 1,200 figures can be seen from the trail. The date of carving is unknown but is estimated to be sometime between 1600 and 1800. The reason for so many is the large area of flat stones which provide a natural canvas for the art collection. It is also noticeable that many of the images here seem to face toward Mauna Kea volcano.

Although the true meanings of the petroglyphs are unknown, it is generally thought that these carvings are records of births and other significant events in the lives of the people who lived on the islands of Hawaii long ago. The petroglyphs at Puako feature carvings of humans, family groups, canoes, paddlers, sails, marchers and dancers, as well as turtles, dogs, chickens and deity symbols.