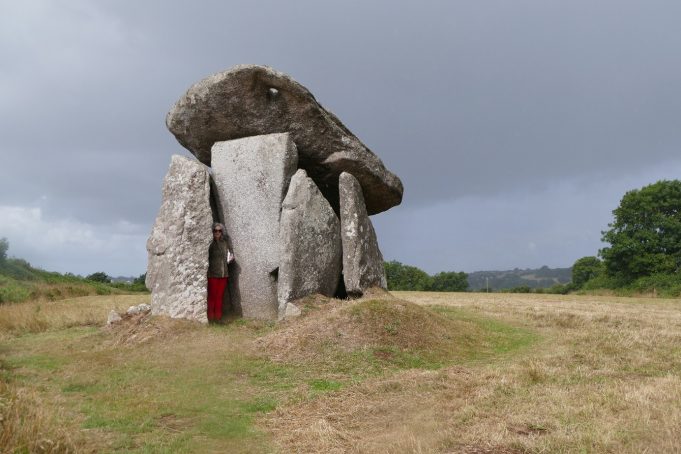 Mythische Stenen (Mythical Stones) is a series of prehistoric discovery guidebooks, written by Hendrik Gommer, describing megaliths in many European countries. This article is taken from the 12th volume which covers England and Wales.

Stonehenge is by far the best known megalithic monument in Britain, but there are thousands of other prehistoric remains scattered across the landscape, many of them older than Stonehenge. They often require more than a little effort to find but reward the more adventurous traveller. The first monument-builders probably settled in South Wales and in Cornwall in the southwest of England, from where they spread to the east.

Built around 3800 BC, Trethevy Quoit (Cornish: Koyt Tredhewi) is a megalithic tomb known locally as ‘the giant’s house’. Just like other portal graves of this type, it would originally have been covered by a mound of earth. The monument has seven upright supporting stones and a 3.7 metre long capstone weighing 10.5 tons, which has a natural hole in it. The remains suggest that the diameter of the grave was 6.5 metres. In front of the entrance was a sort of ‘porch’, under which was a small rectangular opening which gave entrance to the burial chamber. The rear upright has slipped from its place and leans at an angle.

To reach Trethevy Quoit in Darite, take the narrow lane on the left, park at the beginning of the lane and walk 500 metres.

To reach Lesquite Quoit we must turn right in the village of Trybian into a narrow lane, just 2.1 metres wide, hemmed in on both sides by hedges, trees and shrubs which scratch against the sides of our camper van. After 1.5 km we park in a side road but the dolmen is nowhere to be seen. Checking the co-ordinates, I walk across a field and finally reach an open area with a pile of overgrown stones. It is one of only a few Iron Age graves in this region.

Lesquite Quoit is also a portal grave. There are only 20 examples of this type of dolmen in the United Kingdom. According to local folk traditions, the stones were thrown here from Helman Tor by the devil while playing with them. The capstone measures 5.1 m by 3.3 m.

Each volume in the series offers a new perspective on a specific area of Europe and its ancient monuments, seen through the eyes of our prehistoric ancestors. Each book contains hundreds of colour photos. Apart from the first two titles, the books are only available in Dutch. The twelve titles currently available are The Netherlands*, Germany (Lower Saxony **, Schleswig-Holstein, Jutland, Funen and Seeland, Mecklenburg-Voorpommern, Middle Germany), Sweden and Norway, Poland and Bornholm, Northern France and the Channel Islands, Brittany and England.