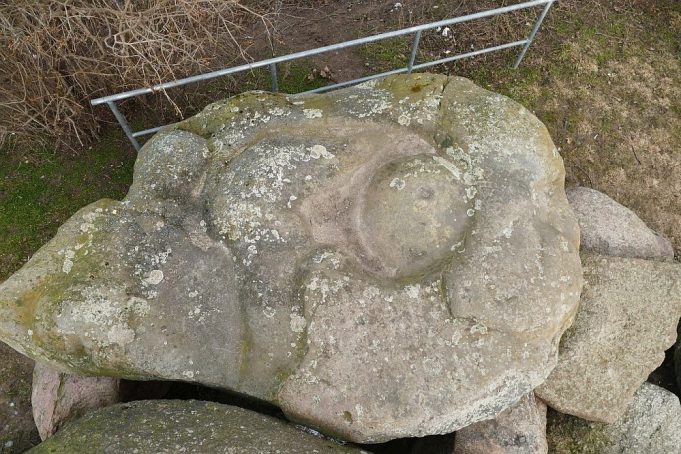 Mythische Stenen (Mythical Stones) is a series of prehistoric discovery guidebooks, written by Hendrik Gommer, describing megaliths in many European countries. This article is taken from the 9th volume which covers Middle Germany.

Sometimes you see something that is so unusual, you ask yourself if it is a new discovery. That was how I felt when I made an aerial photo of a capstone in Wulfen, a town to the north of Leipzig in Germany.  I am always fascinated by prehistoric images of women, many of which have been given the name of Venus, and suddenly I saw in the stone the figure of a pregnant woman. In this case it is highly likely that the stone once stood upright as a menhir, possibly honouring the Great Mother. But now it acts as a capstone lying over the entrance of the burial temple of Hohe Berg in Wulfen. 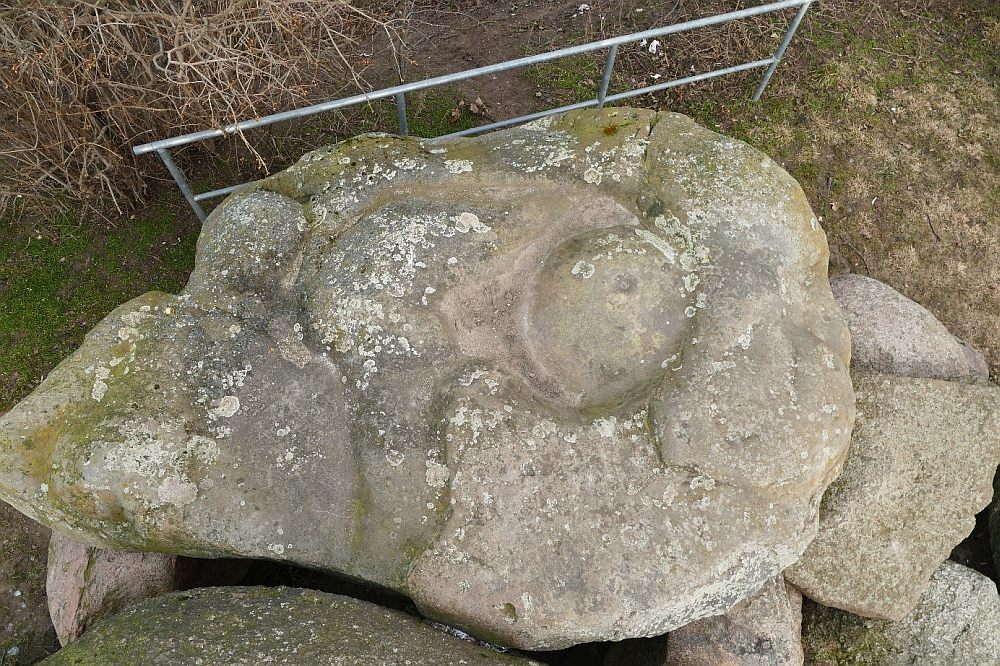 The chamber of the Hohe Berg***** at Wulfen is 3.5 metres long and has a passage on the south side of three capstones. It was excavated in 1784 and the finds can be seen in the museum in Köthen. Pottery shards provide evidence that it was erected by the Walternienburg-Bernburg Culture, while the grave itself was used in both the early and late Iron Age periods. 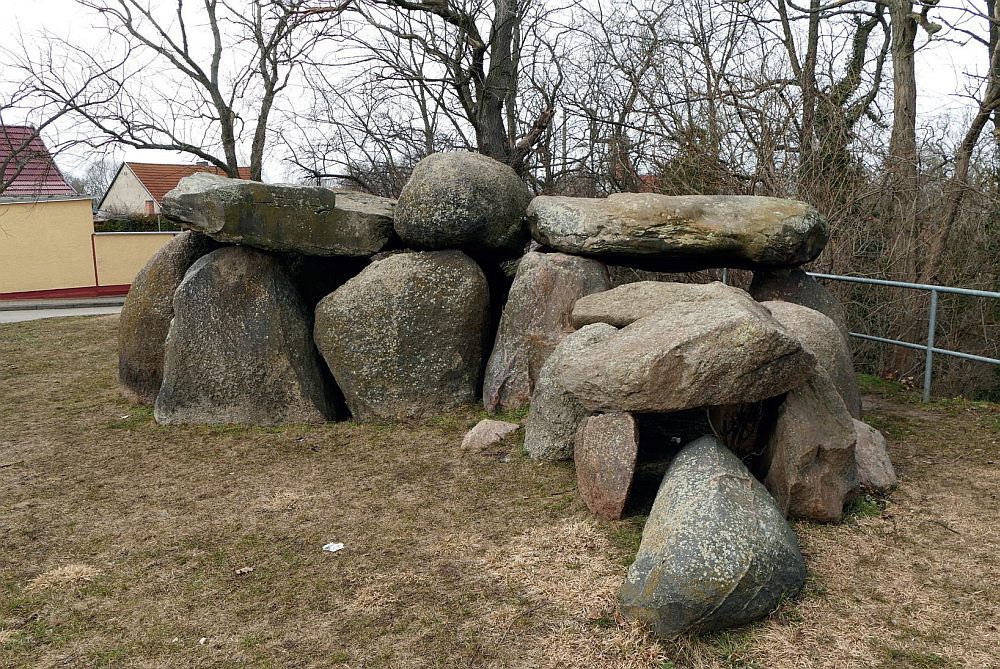 When I took a closer look at the capstone, I could see a carving of a belly with a navel. It is believed to be a natural phenomenon, but to me it definitely suggests that men saw the passage into the tomb as the birth canal of Mother Earth. Though I have no idea when it was carved or by whom.

Strange, I think, that it only shows the belly. If it had been carved in the Stone Age, you would expect to see a complete female figure similar to other fertility images: a fat belly and large breasts. As if the hunebed was an allusion to the Great Mother or some Dolmen Goddess of rebirth. In that case I could imagine that the entrance passage was meant to represent the birth canal. But here there is only the belly. Just to make sure, I take photos of the whole stone so that I can examine them more closely at home… and sure enough, at home I do discover something else! 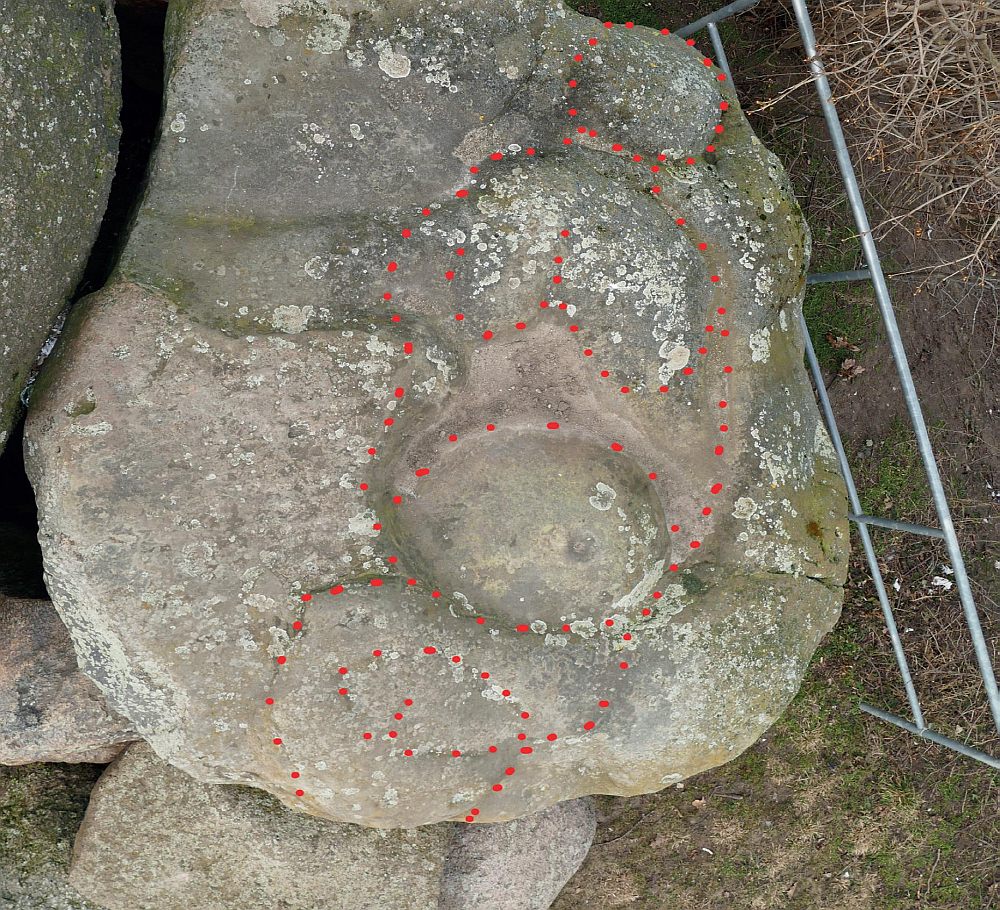 Hohe Berg is at Hohe Berg 15, Wulfen, Osternienburgerland. Park along the road.

Each volume in the series offers a new perspective on a specific area of Europe and its ancient monuments, seen through the eyes of our prehistoric ancestors. Each book contains hundreds of colour photos. Apart from the first two titles, the books are only available in Dutch.

The twelve titles currently available are The Netherlands*, Germany (Lower Saxony **, Schleswig-Holstein, Jutland, Funen and Seeland, Mecklenburg-Voorpommern, Middle Germany), Sweden and Norway, Poland and Bornholm, Northern France and the Channel Islands, Brittany and England and Wales. The books can be purchased in the shop at the Hunebed Centre or ordered via the website https://www.mythicalstones.eu/

*     Published in Dutch and English.

**   Available in Dutch and German.