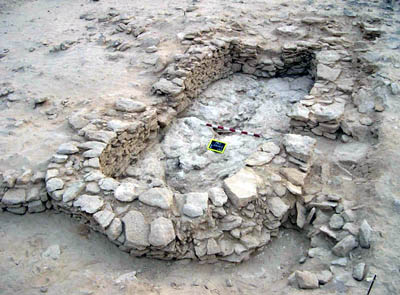 100 kilometres off the west coast of Abu Dhabi lies the island of Marawah. A Stone Age village (8,000 years old) recently discovered there appears to have been inhabited by a sophisticated trading civilisation.

The people who lived here had houses built of stone, the earliest known architectural structures in the Arabian Gulf. They used stone implements, kept sheep and goats and hunted gazelles and other animals. The large amount of remains of fish, sea cows (manatees), turtles and dolphins found on the island tells us that the inhabitants found much of their food in the sea. There is also evidence that they searched for pearls, which probably formed a large part of their maritime trading.

This is also the earliest evidence of maritime trading in the Arabian Gulf region, and clearly depended on their knowledge of the sea. Other items found on the island include pottery which was originally imported from Mesopotamia (today’s Iraq).

A number of houses dating from the Stone Age have been found and archaeologists could see that a number of the houses in the village had been abandoned at some time. They also found one house which had clearly been re-used as a burial chamber for one person.