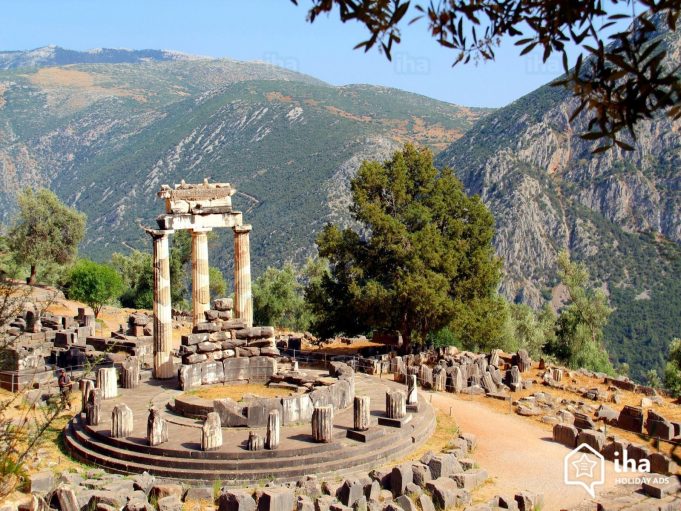 Delphi lies at an altitude of 570 metres on the slopes of the Greek Mount Parnassus, at the junction of several important routes in the ancient world. The famous sanctuary of the god Apollo was built here in the so-called Geometric Period (10th – 9th century BC). The smaller temple of Athena Pronaia was added later, built on a lower artificial plateau. The place is famous because of the oracle, a place where predictions of the future were made by the priests and priestesses. Since 1987 Delphi has been on the UNESCO World Heritage Site list.

The Oracle of Delphi

The oracle was built on a natural fissure in the rock which emitted intoxicating fumes, sending the priests into a trance so that they appeared to be speaking prophecies. According to legend Apollo was the designated guardian of the mysterious ancient power exercised by the fumes, and also possessed similar powers himself. The pronouncements of the oracle came from the priestess and their meaning was interpreted by the priests. So it is easy to understand why Delphi played such an important role, both religious and political, during the 6th and 7th century BC. This was the place where many Greek policies were decided, from founding a colony to deciding whether or not to declare war on another state. The decision came from the god and the pronouncements of the oracle were passed on to the people by the prophets.

Delphi’s importance in Greek antiquity can be seen from the many impressive ruins on the site, such as the stadium, the theatre, the gymnasium and the hotels. Many of the buildings were erected by other Greek cities and city-states to serve as temples where votive gifts were placed. At the same time the buildings would also have served as propaganda on the part of the builders, showing off the wealth of a city.

Over time, buildings were erected here by many governments, tyrants, kings and magistrates, all advertising their presence, and importance, as part of the oracle of Delphi. Many of the buildings stood along the sacred way leading to the oracle, and there were also many statues, most of which have now disappeared.

The most importance structure was the Temple of Apollo. What can be seen today dates from the sixth phase of construction (373 BC) and follows closely the dimensions of the former temple. The entire building was decorated with works of art and objects of cultural and historical significance, and so served also as a museum of religious art. The scale of the temple was enormous. By comparison, all of the other buildings were insignificant. Naturally, the intention was that all visitors should direct their steps to the Temple of Apollo. This was the house of god, situated between the two springs and the rock fissure.

High above the temple plateau lies the extremely well-preserved theatre. Following Greek practice, this was built on a mountain slope. The way up to it led through colonnades decorated with frescoes, sculptures and bronze sacrificial gifts.

Just outside the main complex stands the stadium where athletics events and horse racing took place. These events would be attended by up to 70,000 spectators. Part of the wall of the 180 metre stadium is hewn out of the rock to create rows of seats on a high podium. The sanctuary below is smaller and was dedicated to Athena.

This museum is not to be missed! The works of art are evidence of almost 3,000 years of history. Many of the objects were discovered during excavations in the last century, mainly by French archaeologists. They began excavating here in 1892.