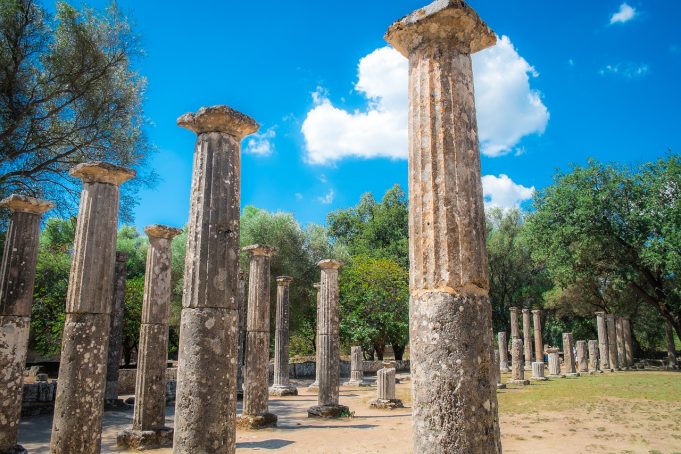 Ancient Olympia is one of the most famous archaeological sites in Greece. It lies in the western part of the Peloponnese to the south of Mount Kronos, 20 minutes by car from the present-day town of Pyrgos. It developed over many centuries into the famous place where the original Olympic Games were organised. Since 1989 Olympia has been an official UNESCO World Heritage Site.

Archaeological excavations have found that the history of Olympia stretches back into prehistory. The site has been in use since the Bronze Age and buildings have been found dating back to 1600-1900 BC. It was a holy place where many gods were worshipped, the most important being Kronos. Later the site was taken over by his son, Zeus. That happened about the same time that people from the Doric culture replaced the Mycenean civilisation in the Peloponnese around 1100 BC. The largest temple in Olympus is dedicated to Zeus.

Olympia was not really a city. The only permanent inhabitants were priests and other temple staff such as cooks, wood- and metal-workers and guides to show visitors around. Visitors to the games, which took place in the summer months, camped in the open air, but official visitors were housed in a special guest house (the Leonidaion). Income at the sanctuary came from gifts.

Olympia is famous above all for the birthplace of the Olympic Games and its high standard of ancient Greek art and architecture. The first Olympic Games took place in the sanctuary of Zeus in 776 BC. For centuries after that the games were organised every 4 years. From the very beginning, the names of the winners were documented, so today we can easily trace the history of the event.

The Olympic Games helped to bring the ancient Greek city states closer together. In this way a Greek identity was created instead of each city having its own culture. Winning the games was of enormous importance for an athlete, and also for the city from which he came.

Because Olympia was so famous for such a long time, it contains many exceptional buildings. One example is the 7th century BC temple of Hera, famous for the enormous capitals on top of its Doric columns. Most buildings actually date from the period after that.

Most of the buildings were erected during the Hellenistic period – the era when Ancient Greece was at its peak from the conquest by Alexander the Great to the Roman conquest of Greece and the Ancient Near East (334–30 BC) – and again later during the Roman and Byzantine periods. One of the most famous buildings is the Olympic stadium with its hippodrome. This now lies mostly hidden among the olive groves but it was not always like that. It was once a flat site where the athletes competed against each other. Spectators sat on the slopes around the site.

In those olden days Greeks came here to Olympia from all corners of the Mediterranean region on pilgrimage to pay respects to Zeus, to make new friendships and alliances, and also to enjoy the poerty, music and the athletic activities.

The Temple of Zeus is enormous, measuring at least 28 by 64 metres. It contained many sculptures portraying the battle between Pelops and Oenomaus as well as statues of Centaurs. Today many of these statues have been restored and can be seen in the nearby museum.

The archaeological museum at Olympia

The archaeological museum is close to the ruins and should not be missed. It is among the top 5 archaeological museums in Greece. There is much to see including some of the most beautiful Greek works of art in existence. There are also reconstructions of the statues from the temple of Zeus. One other important object is the bronze helmet generally assumed to have links with the Athenean general Miltiades, known mostly for his role in the Battle of Marathon.