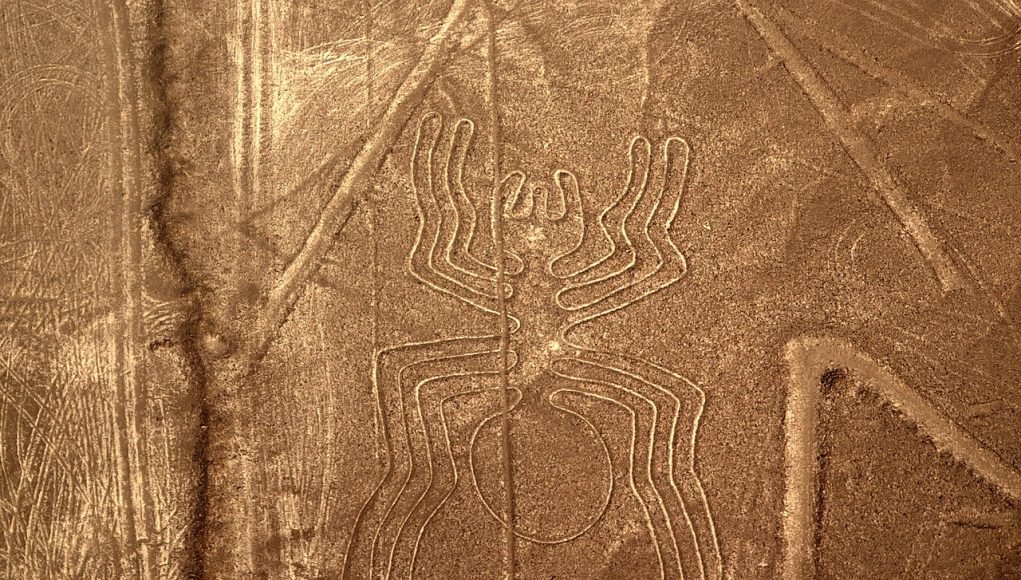 Between the Pacific Ocean and the Andes Mountains in Peru lies an area of desert with very large and unusual patterns of lines in the landscape. We call these lines geoglyphs. In a concentrated area of at least 520 square kilometres there are hundreds of dead straight lines, complex geometrical patterns and enormous images of animals. They were made by Nazca Indians in the period between 200 BC and 900 AD.

Since 1994 the area has been on the UNESCO list of World Heritage Sites. 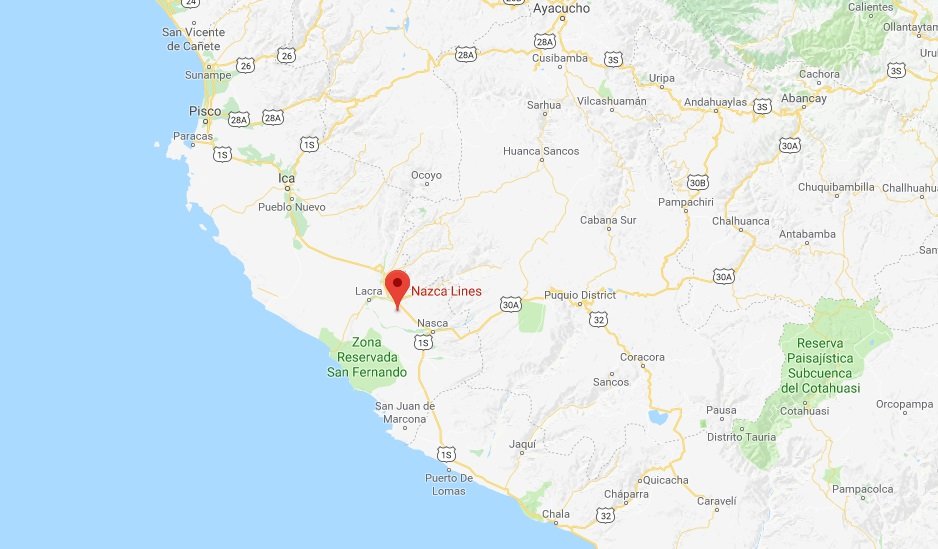 What do the lines and patterns mean?

Some people used to think that they were landing strips for alien spaceships, but we now know that that is not the case. However, there are still questions about why exactly they were made, and a number of theories have been put forward. Some people, such as the famous Maria Reiche, who carried out so much research into the lines, thought that they were astronomical calendars. In her opinion the lines represent the positions of heavenly bodies (the sun, moon and some of the planets and stars) and were used to calculate the best time to sow crops and also the best time to harvest. In addition, they were probably used to predict the winter and summer solstices, spring and autumn equinoxes and solar and lunar eclipses. More recently further explanations have been suggested, for instance that each pattern was maintained by one family and that the patterns were primarily of religious significance and used for specific rituals at different times of the year.

A further theory comes from two archaeologists, Reindel and Isla, who have carried out more than 650 excavations. Their team discovered that small holes had been dug in and around the lines, in which agricultural products and animals were buried. They concluded that the lines were ritual canals, designed to channel the infrequent rains. Their hypothesis is the subject of controversy and the search for the truth about the geoglyphs continues ….

The reason that the lines are so well preserved is that there is very little rainfall in this area. In fact, there has been almost no rain during the last 10,000 years and as a result everything here is bone dry.

First discovered by the Spaniards

The lines were first discovered by the Spaniards who arrived here in the 16th and 17th century. Then about a hundred years ago they were re-discovered and became world famous through newspaper and magazine articles. In 1926 Julio Tello and two friends made the first sketches of these patterns in the landscape. Then from the 1930’s early aircraft pilots were able to get a better view of the phenomena, leading to them being investigated by archaeologists and scientists.

The Nazca lines and figures were created by scraping away the stony surface to expose the yellow layer of earth beneath. Countless numbers of lines, some of them as long as 8 km (and one with a length of 65 km!) fan out in all directions over the surface and criss-cross each other in a seemingly haphazard fashion. Some of the enormous rectangles, triangles and trapezoids seem to resemble runways on an airport, but this complex network of lines is also strewn with abstract designs and stylised figures of animals. Many types of animal can be recognised, such as spiders, various birds, an ape, a llama, a whale, a snake and a lizard. Other designs include a flower and a human figure with a halo. The lizard is 180 metres long and some of the figures are as large as two football pitches. Eighteen species of bird can be recognised including the condor and the colibri, their length varying from 25 to 275 metres. 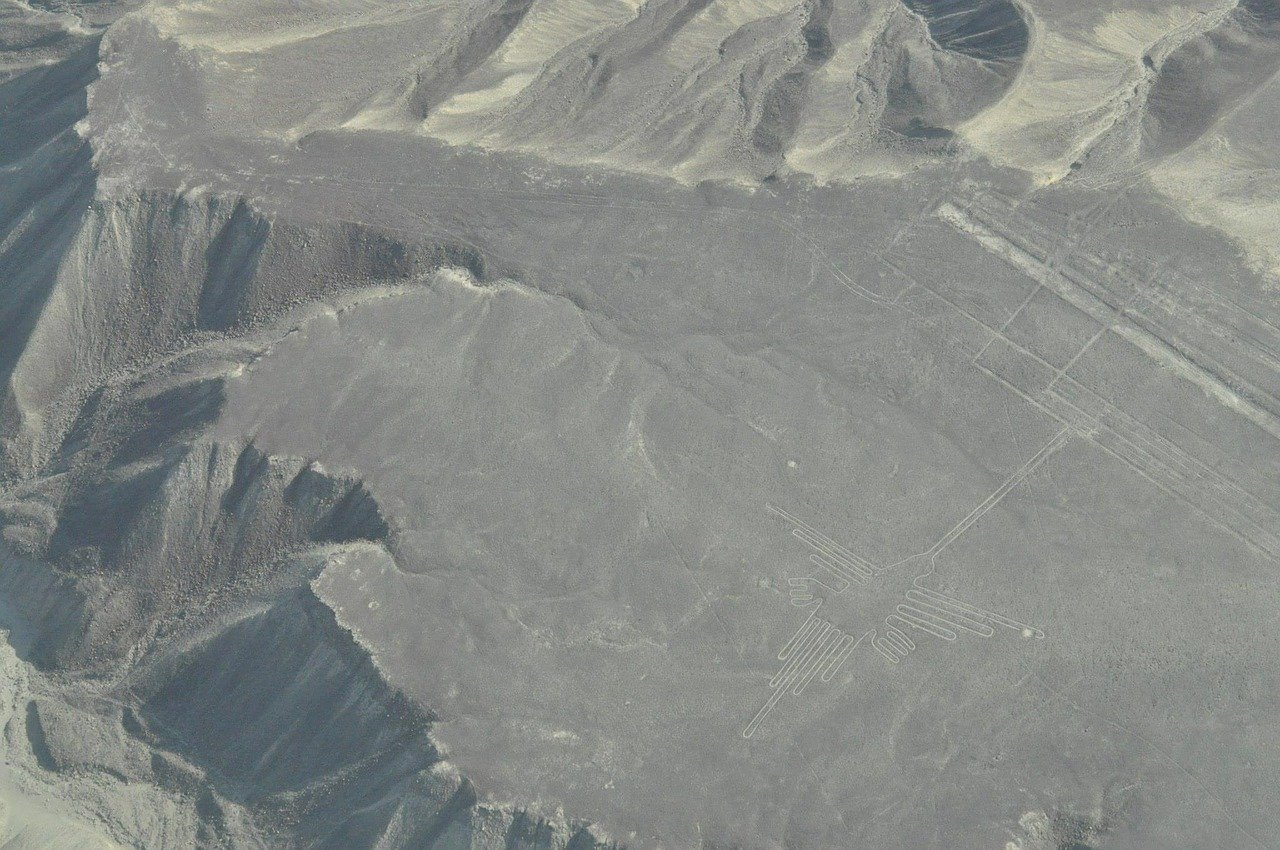 Who were the people who made the geoglyphs?

Thousands of pottery sherds have been found in this area as well as countless piles of stones which resemble the cairns found in Europe. The remains of wooden posts have also been found and at the edge of the area stands a collection of statues and rock inscriptions.

Various designs have been drawn on top of others, suggesting that they were made in a number of different phases. The animals were made in the first phase and the geometric lines were laid out in the second phase. The results of extensive research show that they were all made in the period between 200 BC and 900 AD. The Nazca Indians who made them were the forerunners of the Inca’s and inhabited a large area of Southern Peru. They are now extinct but they did leave behind a number of graphic symbols. They were simple farmers who lived in close harmony with nature and the landscape. Most of what we know about these people comes from their graves. Their burial sites lie along the rock walls of the valley, where the fertile ground runs up into the desert. One of these burial sites contains at least 5,000 graves, but unfortunately most of them have been plundered by grave robbers.