The Sigiriya Rock in the middle of Sri Lanka is all that is left of a volcano. It stands 200 metres high and can be seen from very far away. Also known as the Lion Rock, it is famous for the remains of the palace built on its summit and for its beautiful rock paintings. The rock is listed as an UNESCO World Heritage Site.

The word Sigiriya literally means “lion rock”. In the 5th century AD King Kashyapa built a royal palace on its summit complete with beautiful gardens and baths. In 495 the king committed suicide on the outbreak of war and the complex later became a Buddhist monastery. It was in use until the 14th century when it was abandoned and forgotten for hundreds of years until it was rediscovered in the 19th century.

The citadel on the summit can only be reached by climbing a long stone staircase with 1200 steps. Half way up is a natural resting place on a large plateau where once stood an enormous rock carving of a lion, which gave the rock its name. Unfortunately only the massive paws remain today. 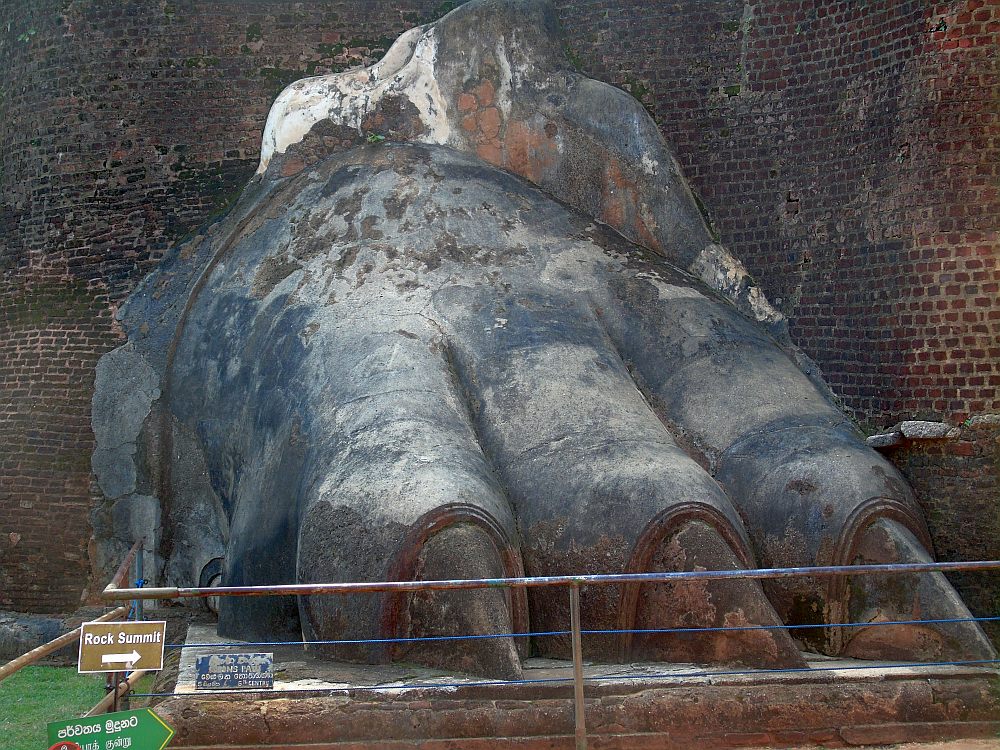 The gardens of Sigiriya

Around the Lion Rock are a number of surprising ornamental gardens which are well worth a closer look. Here can be found the royal baths, mazes, beautiful water gardens and old buildings whose function is unknown. The complex receives many visitors but most of them miss out these areas. As a result they are very peaceful and the few visitors can enjoy the flora and fauna at their leisure.

Because of the many frescoes with which it is covered, the whole face of Sigirya has been called a gigantic picture gallery. Most of the frescoes depict damsels with high foreheads and enticing doe eyes, a rose coloured blush on their cheeks and lips. These ‘cloud maidens’ wear gossamer blouses resembling silken cobwebs woven in the wind.

Halfway up the rock, on the north side, stands the Mirror Wall. Made of brick and covered in white plaster, this was originally so highly polished that the king could see himself whilst he walked alongside it.

The whole of the surrounding area is a paradise for nature lovers. Many animals can be seen wandering here, including Macaque monkeys, monitor lizards, turtles, snakes and many species of birds.