Home english articles The remarkable city of Teohuacan in Mexico 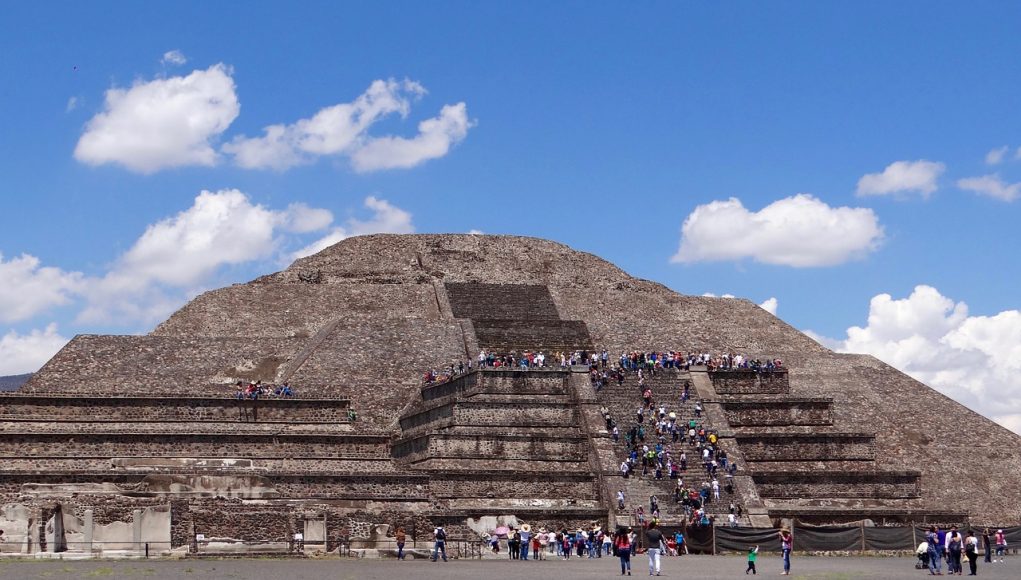 Not far from Mexico City lies one of the most remarkable places in the world, the ancient city of Teohuacan. This old site is still surrounded by mystery and we do not even know who built it. They left no written records behind and all we know comes from texts of the Maya’s which were written much later.

We can surmise that these people, the Teohuacans, were the ancestors of the many peoples who came after, such as the Toltecs, the Zapotecs, the Aztecs and the Maya’s. The complex here was built between 500 BC and 750 AD. At one time, around 500 AD, more than 200,000 people lived here, making it one of the largest cities in the world (even larger than Rome at that time). The city lay uninhabited and unknown for 700 years until it was discovered by the Aztecs. They laid claim to it and people came to live here. They also gave the city its name, which in the Aztec language means “City of those who possess the road to the gods”. Since 1987 the city has been on the list of UNESCO World Heritage Sites.

At the time of Teohuacan there was another important city in this area to the west, Cuicuilco, but this has disappeared completely under a layer of lava. 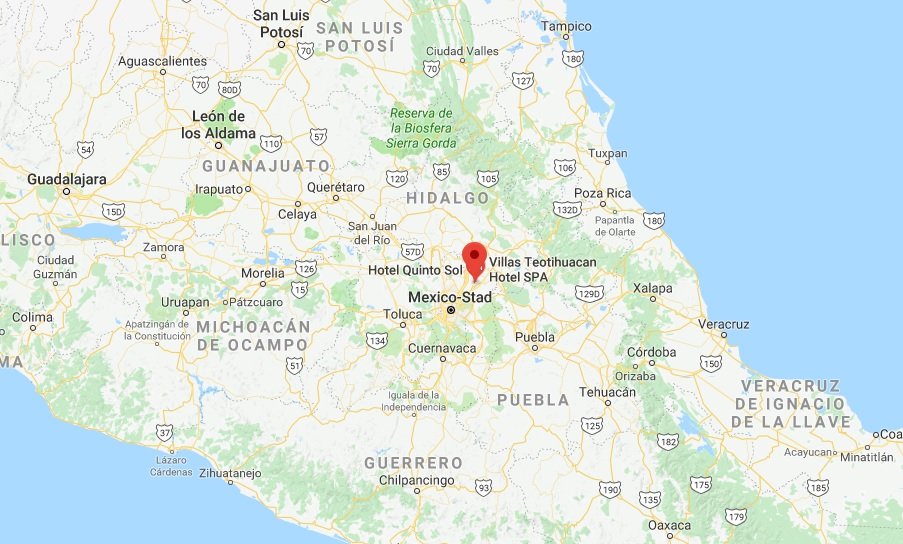 The total surface area of the city is 25 square kilometres. The most impressive structure is the enormous Sun Pyramid, built in the first century AD on the site of an earlier temple. The sides are 225 metres long, making it almost as large as the Pyramid of Cheops in Egypt, although at 70 metres it is only half as high as Cheops. It is estimated that almost 2.5 million tons of clay bricks and rubble were used in its construction. 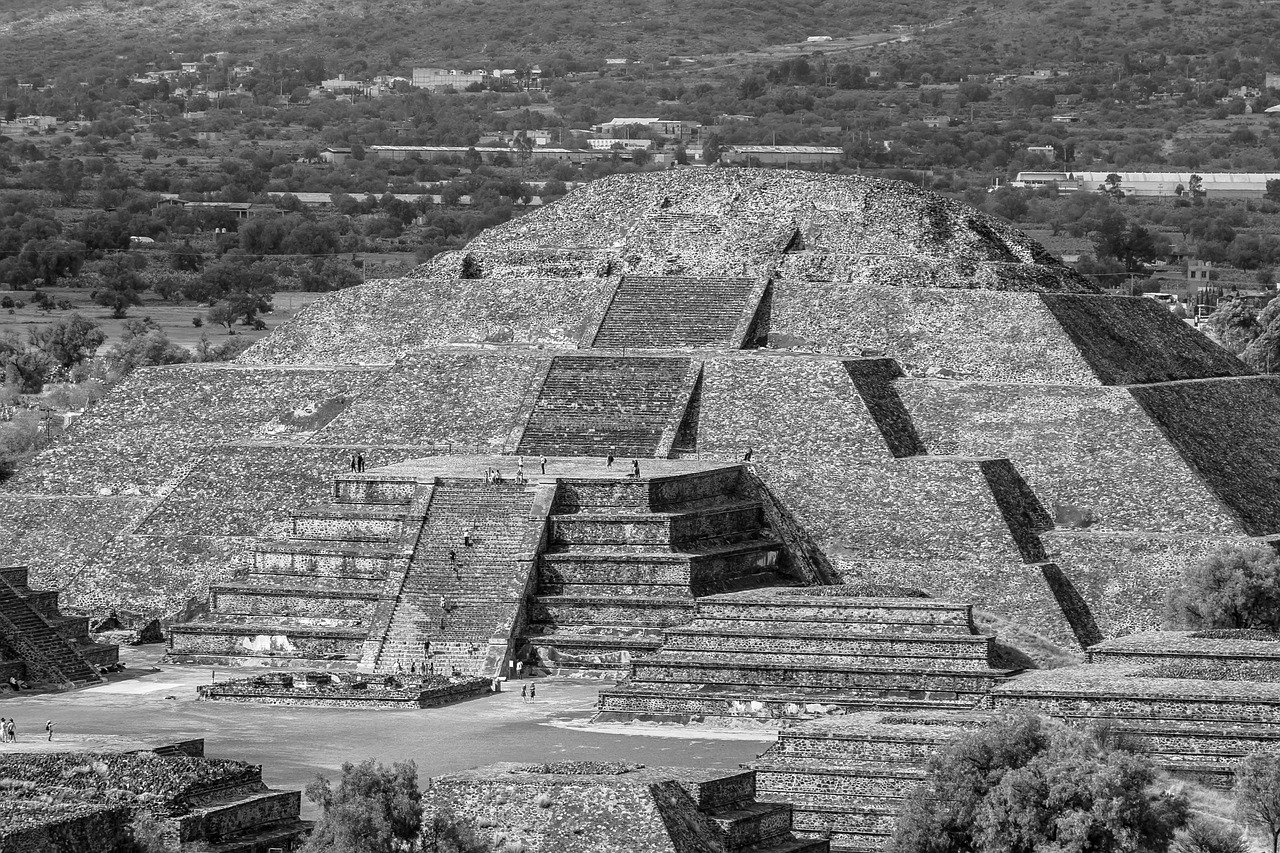 In 1971 archaeologists found a natural cave 100 metres long, 6 metres below the base of the temple. It is thought that this cave was used as a holy place both before and during the time that the temple itself was in use. Before the Spanish conquest the inhabitants of Mexico regarded such a cave as a womb from which came the sun and the moon, as well as the ancestors of the human race.

Moon Temple and Avenue of the Dead

Another impressive structure is known as the Moon Temple, built in the 2nd century AD. At 145 metres the sides are a little shorter than those of the Sun Temple.

To the south of the Moon Pyramid the Avenue of the Dead extends for 3.2 kilometres, lined with smaller temples and step pyramids. The Avenue passes the Citadel, an enormous square measuring 640 by 640 metres enclosed by other structures. On the eastern side towers the Quetzalcoatl Temple, a pyramid with six staircases, built in the characteristic ‘table mountain style”, with a number of rectangular terraces which reduce in size as they get higher. In 2013 concealed chambers were discovered in the Temple of the Feathered Serpent (Quetzalcoatl).

Many objects made of obsidian have been found in the city and the surrounding area. Obsidian is also known as volcanic glass and is created as lava cools very quickly after a volcanic eruption. The material can easily be worked to form objects. The chief characteristic is that it resembles glass, particularly in the way it fractures. For that reason it is often used to make things such as knives and spear points. A large amount of characteristically Mexican pottery has also been found here. This type of pottery has been found all over the central highlands of Mexico in the graves of high-ranking individuals dating from a period between 150 and 600 AD.

The end of the city

The decline of the city came in the sixth century, probably because of climate change. Around 700 AD the city was conquered by a people from the north and set on fire. These invaders then lived in the city for 200 years before abandoning it, after which it lay deserted until the Aztecs discovered it centuries later and it came back into use.