Around 150,000 years ago, during the Saalian Ice Age, the northern part of the Netherlands was covered by a sheet of ice about 1,000 metres thick. The ice had pushed its way south from Scandinavia like a bulldozer and brought with it many thousands of stones, rocks and boulders. In Dutch these are known as ‘zwerfstenen’ or ‘wandering stones’ and in English as ‘erratics’. Many of these stones – from small pebbles to large boulders – still come to the surface nowadays in the Drenthe landscape, much to the annoyance of farmers. Over the centuries, many ploughs have been broken on the stones and farmers have either had to work around them or remove them.

Throughout history – and indeed prehistory – many of these stones have been dug up, removed and re-used in many different ways. Around 5,000 years ago the people of the Funnel Beaker Culture used them to build their hunebeds, in which they buried their dead. But they were not the only ones who made use of these ready-made building materials.

The stones have always been popular. People used them for many different purposes, often in the garden, and to this day piles of stones can be seen in front of many houses as a garden decoration or marking a driveway in Drenthe villages. Some people have even built their own miniature hunebeds.

Farmers used them for the foundations of their houses and barns and for laying out a hard base in their farmyards. Large stones supported the weight of upright wooden beams and barn doors. On many churches and church towers, layers of boulders are visible forming the base for the stone or brick structure above. And they are used in the graveyard of course …

Walkers often find stones along country paths, where they mark the edge of an old field or the ancient boundary between two villages. Many Drenthe villages, particularly along the Hondsrug, still have cobbled streets, laid with smaller pebbles which also date back to the Ice Age. Almost every village uses the boulders in some way or another, as a monument, as an artwork, or for street furniture.

Stones used as an artwork 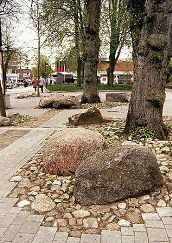 In the past some people found unusual uses for these ‘wandering stones’, such as this cannon ball made of a natural piece of rock. 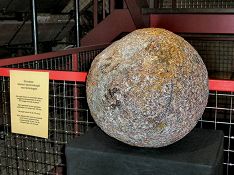 Stone used as a cannonball

Large stones and boulders can be seen everywhere in Drenthe, in towns and villages and in the countryside, either standing singly or in piles or forming a part of some structure or decorative feature. There are thousands and thousands of them!

And not all have remained in Drenthe … many of the stones have been removed and used elsewhere, such as in the stone dikes which protect the Dutch coastline against the sea.

Fortunately there are still enough of these ancient stones preserved here in Drenthe to create a memorial to remind us of the Saalian Ice Age.