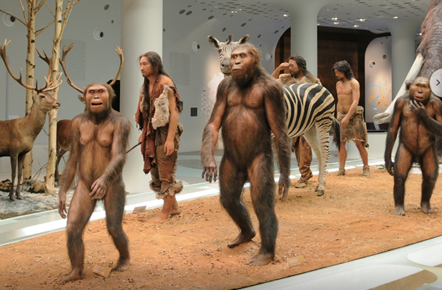 While spending time in the Hantangang River area in South Korea in 1978, an American GI named Greg Bowen found stone tools dating back to the Palaeolithic Era. He informed Seoul National University Museum who carried out a number of excavations between 1979 and 2010. In April 2011 the Jeongok Prehistory Museum was opened on the site to display the finds and tell the story of the earliest inhabited site in South Korea – and the story of the evolution of mankind.

The excavation site is a basalt area covering 800,000 square metres, located around 50 km southwest of the capital, Seoul.

Research by Japanese surveyors uncovered volcanic ash in sedimentary layers 1 metre below the ground surface, dating back 100,000 years. Based on this research, archaeologists believe that the stone tools, which were found 3.5m below the surface, date from the Palaeolithic Period, 350,000 years ago.

Many diverse types of stone tools were found in the sedimentary layers, such as hand axes, cleavers, hunting stones, fist-sized picks, scrapers, notched tools etc. Most common were a type known as Acheulean hand axes, first known from finds at St. Acheul in France. These are oval or triangular-shaped, and both sides of the blade are evenly trimmed. Their sides look similar to two palms held together.

Stone tools like these were made by Palaeolithic people for their everyday use, and hundreds have been found here and at other ancient sites. It is thought that some of these were production sites and the stone tools were used to hunt animals and gather fruit. Archaeologists assume that the people living here obtained their food from plants and fruits growing in the field and mountains; gathered clams and caught fish in Hantangang River; and hunted animals. They must have built shelters for winter and probably moved from one place to another when necessary to get food.

All finds from the excavation are on display in the on-site museum, opened in 2011. But the displays in this futuristic building also tell the wider history of the worldwide evolution of mankind.

The moment you enter the museum, you begin a journey of several million years as you walk alongside our human ancestors.

These ancestors began to evolve in Africa about six or seven million years ago. Experts believe that they spent most of their time in the trees at first, but were also able to walk quite easily on two legs on the ground. Walking upright on two legs is often considered by scientists to be the most fundamental defining trait of human beings. The display shows how the first humans started their great march across the vast land of Africa into Asia and Europe.

The installation also includes life-size models of now-extinct animals such as mammoths and the woolly rhinoceros.

Much more information and photographs can be found on the two websites listed below, part of the informative collection online at https://artsandculture.google.com