Home english articles Nobbin, one of the largest hunebeds in Northern Germany 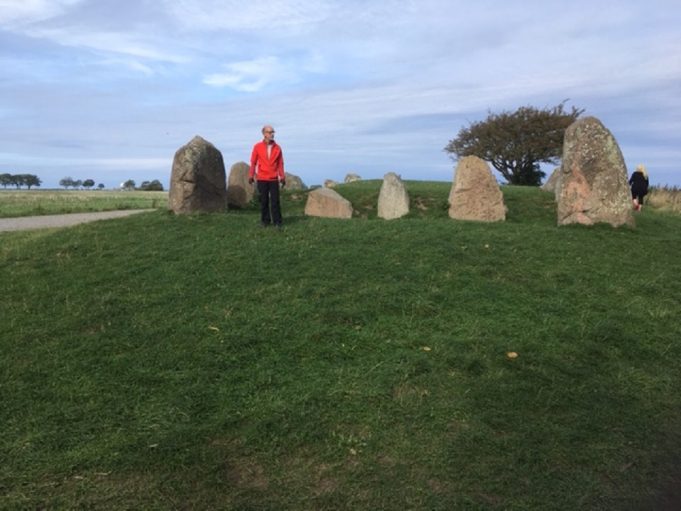 This hunebed (German: Hünenbett), built with Ice Age erratic boulders, stands in the district of Putgarten on the island of Rügen. Like Dutch hunebeds, it dates from the New Stone Age and was built by people of the Funnel Beaker culture. Its German name is Riesenberg (Giant’s Hill) and the hunebed is remarkable for two reasons: first, because of its length, which makes it one of the largest hunebeds in Northern Germany; secondly, because it has no capstones. It stands by the main road just a few metres from the cliff path at Tromper Wiek, a bay on the Baltic Sea.

All hunebeds in Germany are numbered according to a system introduced by the German archaeologist Ernst Sprockhoff (1892-1967). He numbered over 900 hunebeds and Nobbin is known as Sprockhoff-number 466.

This is a so-called Long Barrow with a number of burial chambers within a circle of ringstones. It is a very impressive monument with a trapezium shape, a length of around 34 metres and a width varying between 8 and 11 metres. It originally consisted of 53 ringstones but today only 39 remain. To the northwest two other hunebeds stand close to each other, one of which is well preserved. The burial chamber still has six uprights and measures 180 centimetres long, 110 cm wide and 140 cm high. Little is left of the second hunebed except for a few uprights. On the southwestern side are two ‘guardian stones’ 3 metres high, similar to those often found in Scandinavian hunebeds.

In 1932 the first excavation was carried out by Wilhelm Petzsch and Karl August Wilde. This produced many finds. In 1970 an archaeological investigation of the hunebed, led by Prof. Dr. Ewald Schuldt, found three flint arrowheads, a flint blade, pottery fragments and fragments of human bone (including two skull fragments). The site also contains Iron Age graves and in the northern burial chamber an urn was found with grave goods from the 5th century BC. This discovery confirmed that the capstones had already been removed from the burial chambers in an early period. Potsherds from the Slavic period and an Arabic coin dating from the 9th century were found between the ‘guardian stones’.

The wealth of archaeological finds is evidence that the monument remained of importance for the inhabitants of the island for thousands of years. Historical sources also make mention of a second stone grave.

Photos and text by Anton Postma and Nadine Lemmers