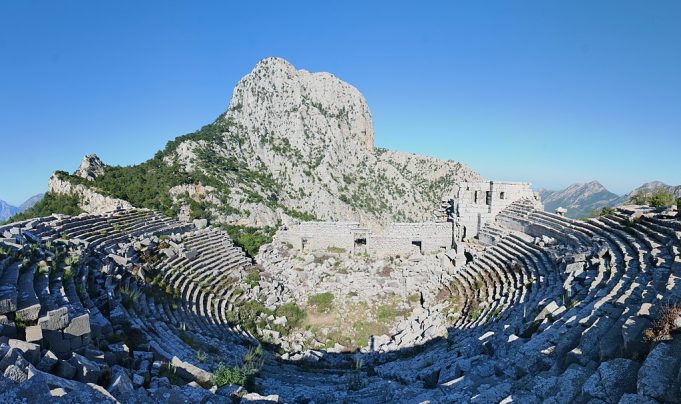 Termessos, which lies about 30 kilometres to the northwest of Antalya in Turkey, is one of the best preserved cities of antiquity. The ruins of this Pisidian city can be found in the National Park of Mount Güllük-Termessos, an area combining archaeological treasures with breathtaking natural scenery. Termessos lies in a stunning location, hidden in a pine forest on the southwestern flank of Mount Solymus (or Güllük Dağı) in the Taurus mountains. The city was built on a natural rock platform at an altitude of 1,000 metres. The altitude and the high rocks, which form natural walls on the western and eastern sides, provide the city with natural defences.

History of the site

According to legend, the city was founded by Bellerophon. Strabo tells us that the inhabitants were Pisidians who called themselves Slymi. The name of the mountain derives from the Anatolian god Solymeus who later came to be associated with Zeus. Coins minted in the city often bore the image of Solymeus. The city is first mentioned in 333 BC when Alexander the Great decided not to attack it because of its strategic position. The city is also mentioned in Homer’s Illiad in connection with the legend of Bellerophon. Little is known about the early history of the city and it is hoped that archaeological excavations will shed more light in the future.

The city was attacked several times by the Lukka and Pisidians right up to the Roman Era. Because of its strategic position the Roman Senate granted the city independent status in 71 BC. The Hellenist period and the second and third centuries AD were a golden age for the city, but at the end of the third century the population declined. The city was abandoned between the fifth and seventh centuries following an earthquake which crushed the aqueduct, destroying the city’s water supply. The remains of the damage caused by the earthquake can still be seen today.

The city and its monuments

The car park serves the Temple of Artemis-Hadrian, the Propyleum of Hadrian and the gateway of Hadrian. From there, the 2nd century royal way leads past city walls, cisterns and a city gate to the city itself. East of the city gate the walls bear inscriptions portraying predictions using dice.

The most important buildings lie within the inner walls: the agora, gymnasium, amphitheatre, odeon and six temples. The agora is bordered on three sides by stoa’s (covered walkways). The gymnasium lies to the northwest of the agora but is difficult to recognise through the tree growth. The gymnasium is in Doric style and dates from the 1st century AD.

The amphitheatre, dating from the Hellenist period and with Roman characteristics, provided seating for 5,000 people. 100 metres from the amphitheatre stood the odeon (for music and poetry) which held up to 700 visitors. As well as its theatrical use, the odeon might well have functioned as a bouleuterion or council chamber.

Four of the six temples stood nearby, with the temple dedicated to Solymeus standing behind the odeon. The 2nd century temple to Artemis is by the southeast corner of the odeon and to the east lies another temple from the 3rd century with a distinctive entrance on the right-hand side. This temple seems to have been dedicated to a hero or demigod.

The two last temples are built in the Corinthian style near the stoa of Attalos and date from the 2nd or 3rd century AD. One unusual building is a house built in typical Roman style with an atrium (inner courtyard) and an impluvium in which rainwater was caught and stored. This house conveys an impression of the life of a Roman elite.

On the north, west and south sides are large cemeteries – the one to the south is the most impressive. Despite the subsidence caused by earthquakes and plundering by grave robbers, the burial monuments and sarcophagi remain imposing.

The city was finally abandoned in the 5th century and even today has not been excavated.