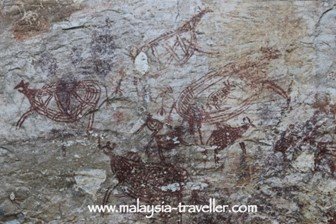 The cave art of Gua Tambun is the largest display of Neolithic rock paintings in Asia and is estimated to be between 2,000 and 5,000 years old. The paintings are located on a prominent limestone rockface on a hill near Tambun, close to the town of Ipoh in Malaysia.

The paintings are not actually inside a cave but painted on a rock shelter, a slightly overhanging ledge between 5 and 25 metres above ground level. Eleven panels scattered across the walls illustrate mainly hunter-gathering activities. The paintings were discovered in 1959 by a British soldier, 2nd Lieutenant R. L. Rawlings of the 2nd Battalion, 6th Queen Elizabeth’s Own Gurkha Rifles, while on a routine training exercise. He realised that these reddish-orange drawings were not the usual graffiti, and this was confirmed by a team from the National Museum.

It is thought that the paintings were made by people of the ‘Orang Asli’, the earliest known inhabitants of the Malay Peninsula, who migrated southwards into the area between 2500 and 1500 BC. ‘Orang Asli’ literally means “first people” or “native people”. However, as the age of the art is uncertain it is possible that it was made by an unknown earlier group before the arrival of the Orang Asli. The reddish-brown paintings were probably made using Hematite, an iron oxide.

Given their age and their long exposure to the elements, it is not surprising that large parts of the art have faded and can no longer be seen with the naked eye. In 2009, researchers from University Sains Malaysia conducted a thorough examination of the site using high resolution photography and digital image analysis. They were able to identify over 600 distinct drawings of humans, animals, fruit, geometric shapes and abstract motifs. Recognisable animals include a dugong, tapir, boar, deer, goat and turtles.

The analysis showed that the rock art was produced in at least three different styles, described as X-ray style, solid silhouette, and stippled drawing. X-ray style drawings depict the skeletal frame and internal organs of animals; silhouette drawings are depictions in a single solid colour; while stippled drawings are in the form of shapes or patterns formed by small dots. Most of the art is in the solid silhouette style, drawings of animals in a single colour of red, purple or orange. These include one panel with human figures and a variety of botanical shapes, and another panel with various types of ocean creatures.

The most distinctive X-ray style panel at Gua Tambun depicts a wildlife scene with animals which may be deer or buffaloes. The dark-red paintings outline the skeletal frames and – amazingly – one of the animals appears to be a pregnant deer, carrying a fawn inside the belly.

The photos and much of the information in this article is taken, with permission, from the website https://www.malaysia-traveller.com/gua-tambun-cave-paintings.html. Anyone wishing to visit the cave paintings will also find detailed directions on the site.