Home english articles The oldest wheels in the world

When was the first wheel invented? And who invented it? Evidence for the earliest use of the wheel comes firstly of course from the wheels which have been found, but other clues include images, drawings, cart tracks and old roads. We know, for instance, that the people of the Funnel Beaker Culture had wheels, because cart tracks have been found under the dolmen (hunebed) at Flintbek in Germany. A Funnel Beaker pot from Bronocice in Poland bears an image of a cart and oxen dating from between 3,635 and 3,370 BC and this is the earliest known representation of a wheeled vehicle.

Oldest wheels in the Netherlands

The oldest wheels found in the Netherlands date from the New Stone Age, about 4,600 years ago.

These were found in wet areas such as peatbogs and were often unused and sometimes even unfinished. It is thought that they were peat offerings and may have had some important ritual significance, but we can only guess at their meaning.

Many wheels have been found in the peat in Drenthe and Overijssel, such as the wheel from Steenwijkerwold which dates from around 2,280 – 2,130 BC. This is a wooden disc about 90 cm in diameter with a thicker piece of wood in the middle around the axle. 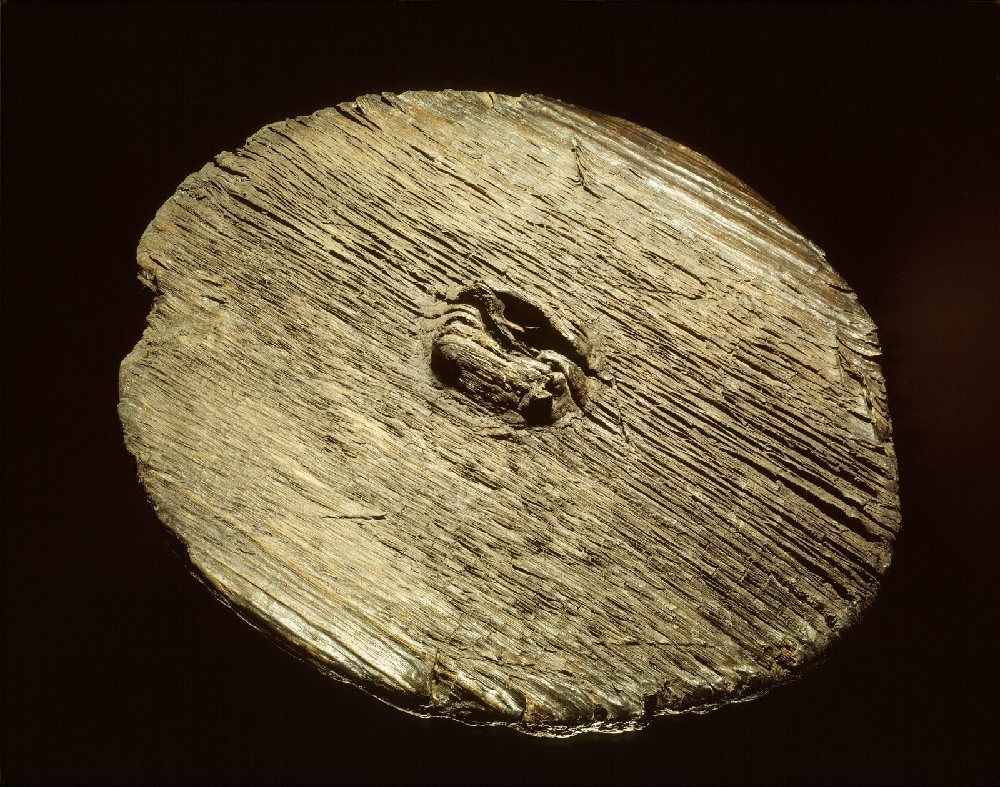 Wheels provide proof that people were transporting goods of some kind, so it is no coincidence that the oldest known roads date from the same period – the New Stone Age. Remains of old roads are often difficult to discern in sandy areas, but by drawing lines linking burial monuments (tumuli and dolmens) we can reconstruct some of these old routes. Archaeological finds have also helped to date the tracks through the peat as the oldest roads. We know that oxen were used to

The oldest wheel in the world

The oldest wheel in the world was found in bogs to the south of Ljubljana in Slovenia, at a place called Stare Gmajne. It has been dated to between 3,360 and 3,030 years BC, a time which in that region was known as the Copper Age. The ashwood wheel is 5 cm thick and has a diameter of 72 cm. The oak axle was 124 cm long and was fixed to the wheel with oak wedges. It was probably part of a handcart with two wheels.

Even older is an image of an ox and a cart with four wheels dating from the Cucuteni culture (BONDÁR 2012). The people of that culture lived in an area which forms today’s Rumania, Moldavia and the Ukraine. The image has been dated to between 3,950 and 3,650 BC.

The wheels were part of a cart. Here are two examples of reconstructed carts with two wheels.