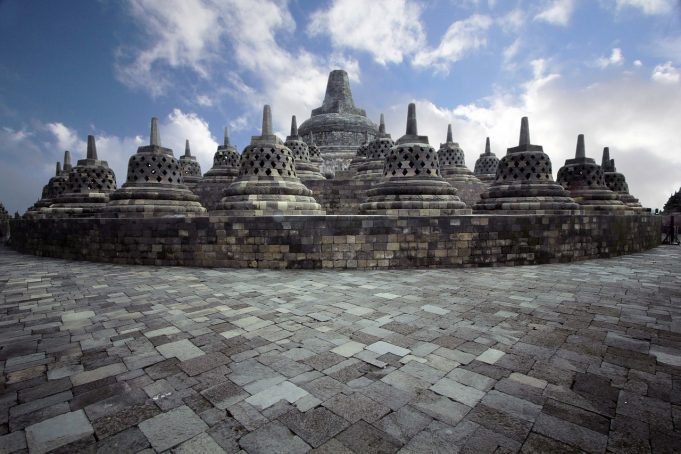 Borobudur is one of the most remarkable Buddhist structures in the world. It is also one of the most visited tourist sites in Java, attracting around 2 million visitors a year. That is not surprising as its presence is overwhelming. In 1991 it was placed on the list of UNESCO World Heritage sites. 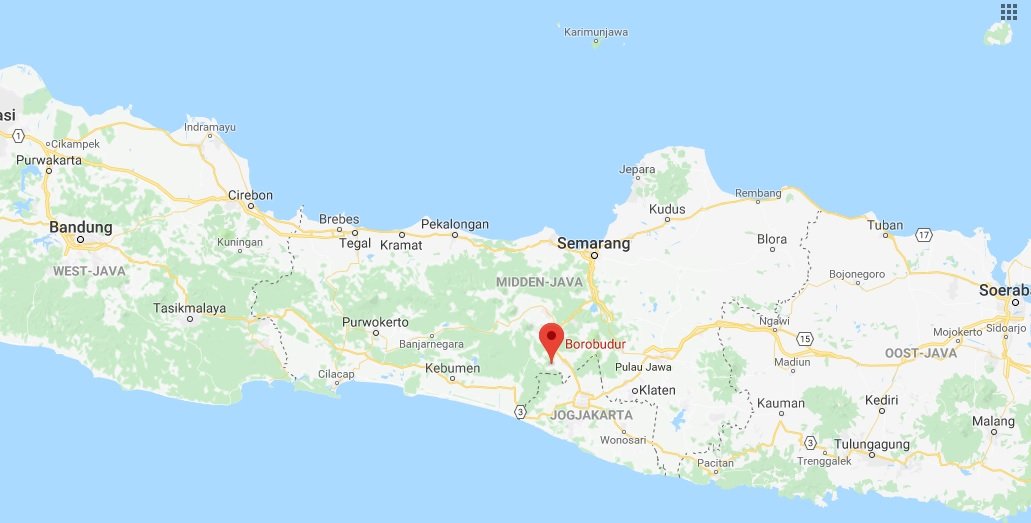 The enormous complex is about 40 kilometres north of Yogyakarta and 7 kilometres south of the city of Magelang (Central Java). It was built during the reign of the Sailendra Dynasty in the period 750-842 AD. After a power struggle in the 14th century the shrine was abandoned. For centuries Borobudur lay buried beneath a layer of ash from the surrounding volcanoes (the Merapi) and vegetation. 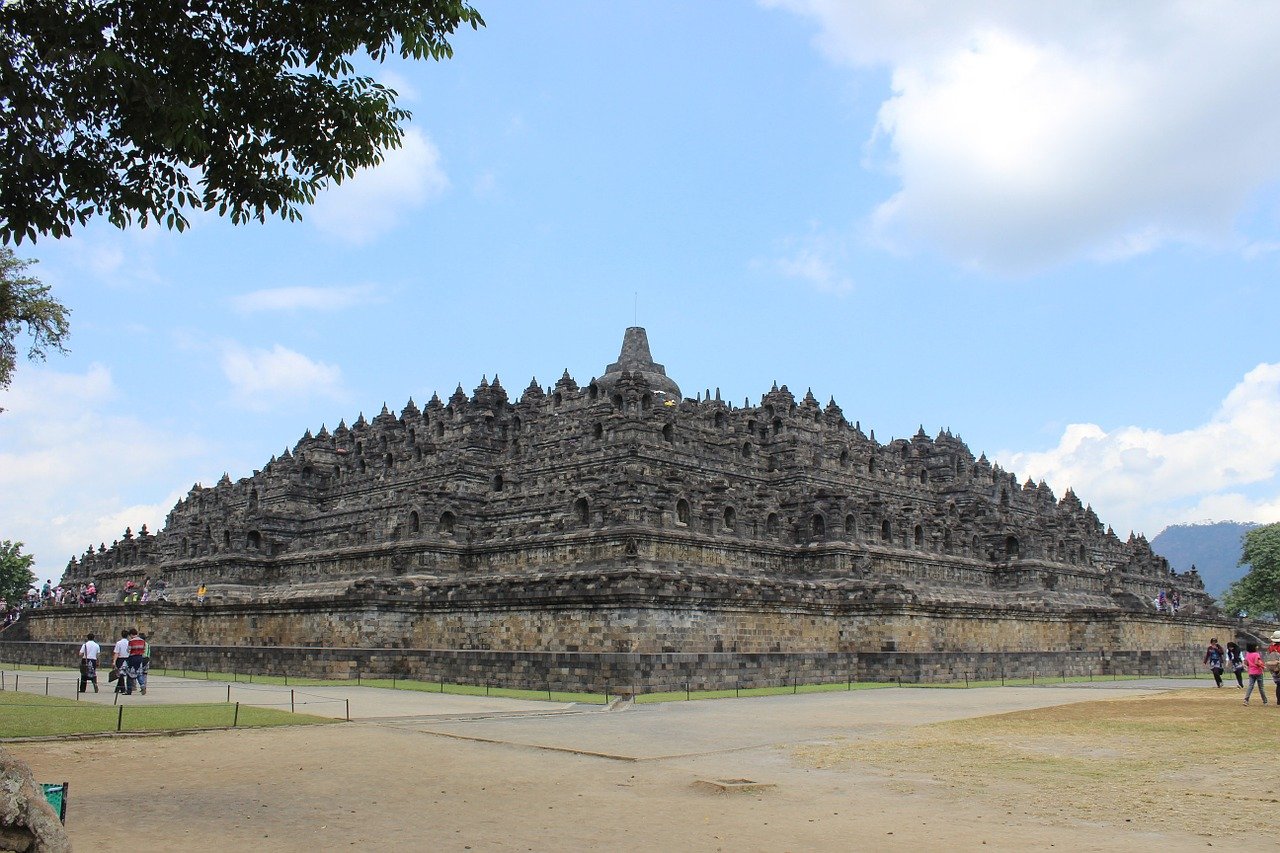 Borobudur was built as an enormous dome called a stupa (Sanskrit for heap). A stupa represents the space between heaven, earth and the underworld and usually contained preserved ash and relics. The central stupa at Borobodur is surrounded by 72 smaller stupas. There is serious doubt as to whether the main stupa ever contained a relic. Several objects have been found but none were of any value.

The base of this stupa is 123 by 123 metres and the temple consists of no less than 56,640 cubic metres of stone. Construction must have taken at least 80 years.

The English Lieutenant Governor Sir Thomas Stamford Raffles was the man who rediscovered Borobodur in 1814, at a time when the Dutch East Indies were under an interim British administration. He ordered a large-scale clean-up of the site and his Dutch colleague, the engineer H.C. Cornelius, and 200 men cleared the site of ash, rubble and jungle growth.

But it was not until 1885 that the Dutchman Jan Willem IJzerman – first chairman of the Archaeological Society of Yogyakarta – discovered the most important part of the temple, the base of the stupa. 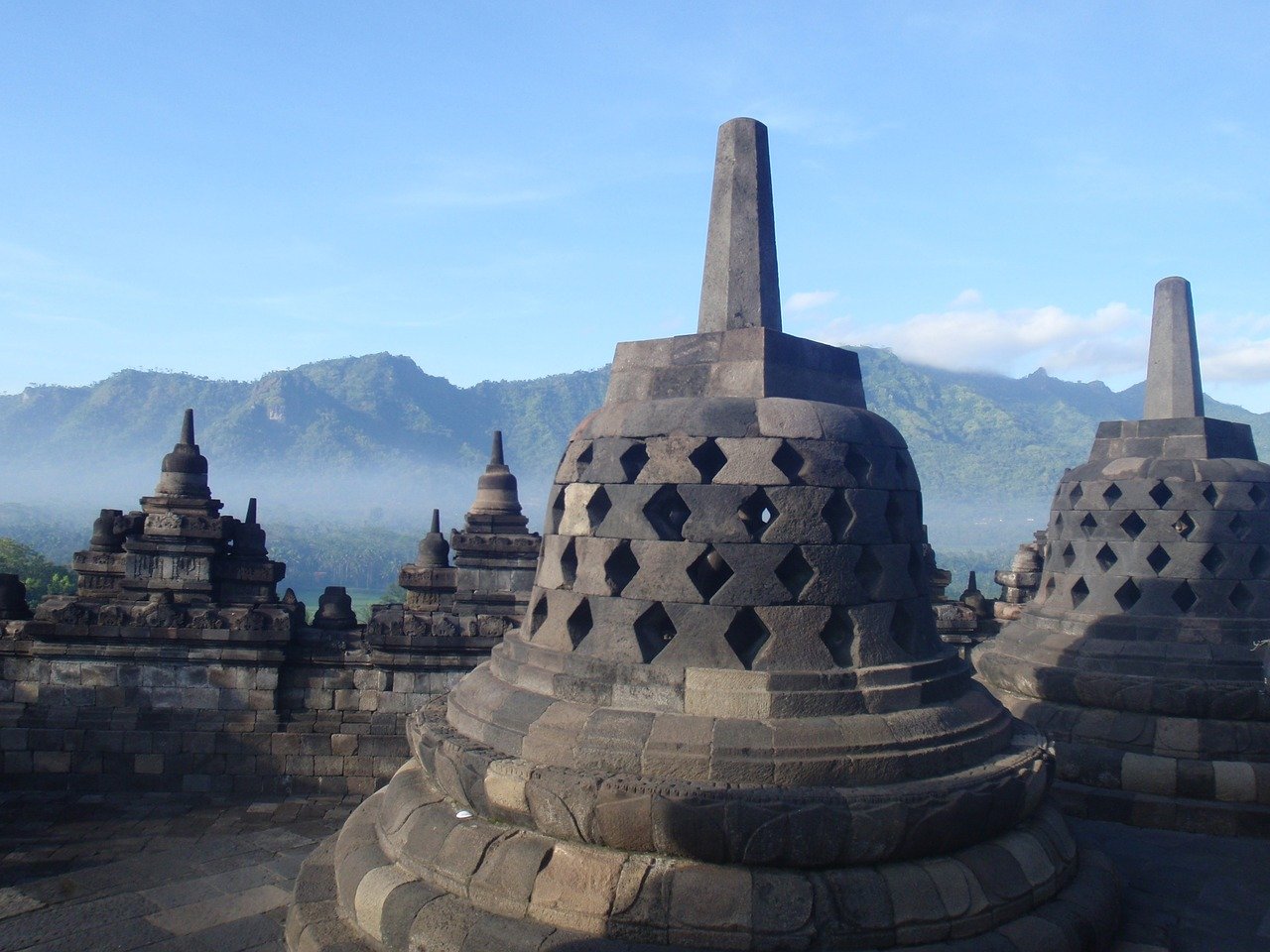 The first important restorations took place in the period 1907-1911, led by the Dutch army engineer Theodoor van Erp. But he did not complete the work and a much greater operation was required to save Borobudur from falling into ruin. From 1975 to 1983 UNESCO and the Indonesian government co-operated on a massive restoration project at Borobudur.

In the last century Borobodur has been severely damaged by earthquakes, volcanic eruptions and even bomb attacks. It has now been restored again and is again open to visitors.

The life of the Buddha

The shrine consists of 9 platforms, one above the other, which represent the Buddhist cosmos; the lowest 6 are square, the upper 3 are round. The reliefs on the panels on the lower terraces tell the life story of the Buddha  (the Ramayana). In order to read the images in the correct order the visitor (including the large number of pilgrims) must walk several kilometres. 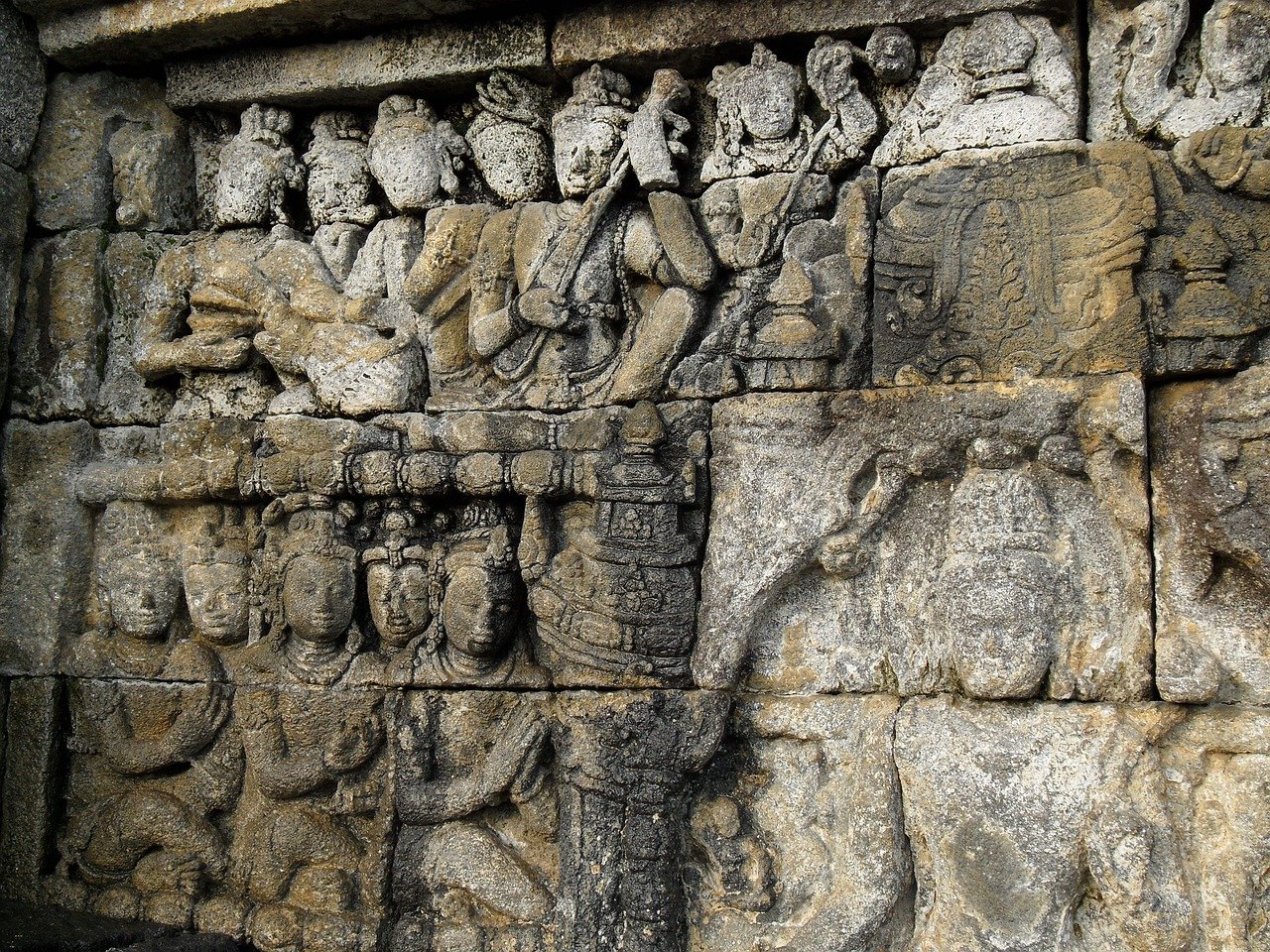 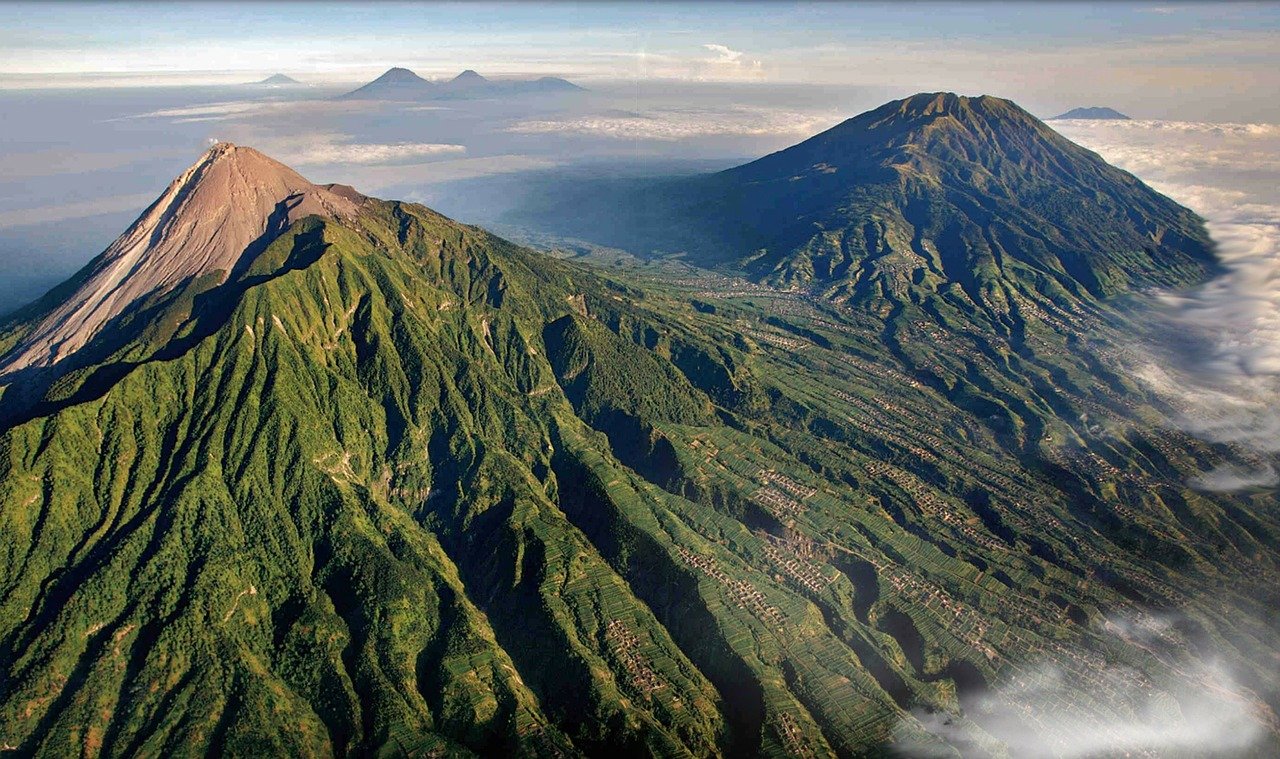 The volcano of Merapi can clearly be seen from Borobudur. It is still active and the monument has on many occasions been damaged and covered by a layer of ash. 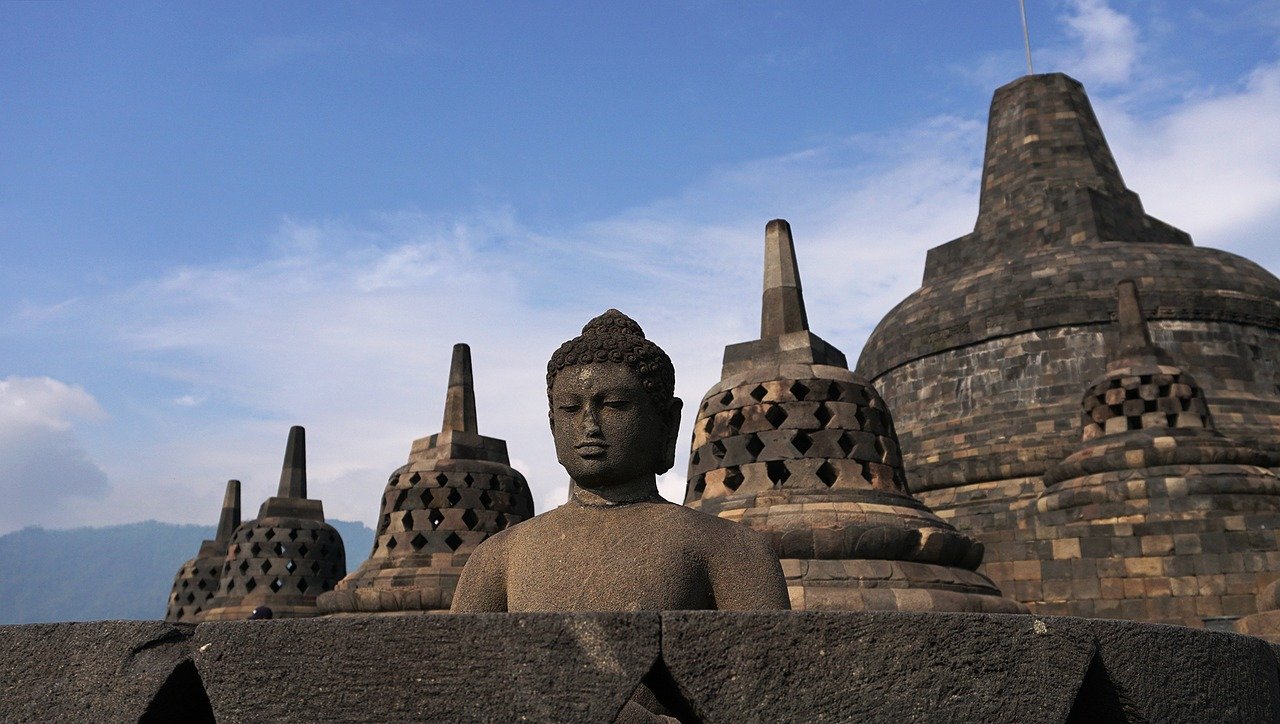 The higher terraces have smaller stupas containing an image of the Buddha. They are built around one large central stupa which symbolises Nirvana, where man is free from all earthly cares. The top-most stupa is empty inside, although it is not certain if this was always the case.

Unfortunately, apart from Buddhist pilgrims, most tourists are not interested in the beauty of the Ramayana. They run up the stairs to the top of the temple to enjoy the view of the Merapi volcano, the palm trees and the rising sun.