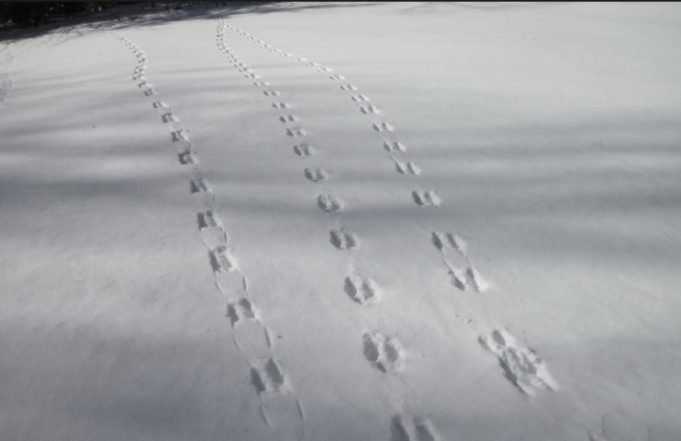 From ancient times humans have always been hunters, mainly in search of food and raw materials. Being able to find animals was an important skill for a hunter. When we think of hunting, we probably imagine people throwing spears and shooting bows and arrows, but hunting really means going in search of animals and then preparing the prey for eating. Without prey, there would be no food or other raw materials such as skin and bones. This article describes some of the ways in which animals can be found.

Putting food on the table was essential, but just how do you find the food? Ancient people were far more proficient at looking for animal traces than we are today. Even insects leave clues, no matter how small they are. People gradually learned about the traces left by animals over a long period of time.  Today, we do not need to look for clues to find our food, but it is still fun to keep your eyes open as you walk through the woods.

This is one of the best-known methods of tracking an animal. However, most people do not realise just how much information such tracks can provide.

A paw track tells us not only what kind of animal made it, but how big or heavy it was. Experienced hunters were also able to read the direction in which the animal was travelling, learn whether it was just one animal or part of a group and, if so, how large the group was. The tracks could also reveal whether an animal was injured.

Animal poo tells us whether it came from a plant-eater (herbivore), a meat-eater (carnivore) or an omnivore which would eat anything. The excrement of plant-eaters often contains undigested plant remains, because plants are sometimes difficult to digest. Stalks and grass can often be seen. With birds, seeds and pips are often present and this facilitates wider distribution of the plants or trees over a larger area.

The poo of meat-eaters contains far fewer such remains, but the droppings are thicker and have a much stronger smell because they are rich in protein. The only things visible in the poo are hairs and feathers.

Another type of droppings are pellets which a bird or animal vomits. Pellets from an owl, for instance, often contain small bones and even skulls. Snakes also sometimes vomit their prey again if they feel threatened.

Like every other living creature, an animal needs water. Go and sit by a pool or a pond in the woods and the chances are that you will see a variety of animals. It is also important to know if an animal is more likely to appear at dawn or dusk, during the day or at night. That tells you when you are most likely to see the animal.

But its behaviour is also what makes an animal special. One example is the rooting in the ground of wild boar, which so annoys farmers on the Veluwe. Or the tell-tale signs left by a beaver building a dam or a pile of feathers in a place where a fox has caught and eaten his prey.

You can also learn a lot from the external features of animals. One way to tell a roe deer from a red deer, for example, is to compare the antlers. Male roe deer have a simple set of antlers while those of the male red deer are much larger and profuse.
Hares have longer ears than rabbits and run on four legs, while the rabbit mainly uses its two back legs. The colour scheme in the plumage of a bird, or even the shape of the wings, is often enough to identify what bird you are looking at. Indeed there are far too many examples to list them all here, and I’ll leave the rest to your imagination.

Shelter and accommodation (somewhere to sleep)

The simplest example is the hole of a rabbit or a fox, while some animals have no fixed sleeping place but just hide themselves away in the woods. Many vulnerable animals, such as deer and zebras, sleep standing up so that they can quickly run away in case of danger. Birds often make nests in trees, as do squirrels, who will sometimes enlarge an old hole previously used by a woodpecker.
The type of shelter often reveals the area where animals or birds spend much of their time, which allows you to focus your search in a smaller area.

Teeth and other marks of gnawing or feeding, for instance on young leaves, trees, grass and carcasses, can tell you which animals made them. The paths or tracks made by animals are a helpful visible sign, such as grass trodden flat or young bushes lying flat on the ground, perhaps indicating regular use.

You can often find strands of hair or wool caught on bramble bushes or a hedge. Bare patches on trees, surrounded by hairs, are a good sign of wild boar or deer activity. These are scuff marks where an animal had a sudden itch. The rule is not only to look at the ground, there is a lot to see at eye level.

Each animal has its own special tone of voice. In the case of a roe deer (or sheep) we call it bleating, for a fox it is barking and for cattle lowing. The reason that animals make noises is to let others know “this is my territory”. Sometimes sounds are designed to attract females (the mating urge).

Some animals can be heard from 5 kilometres away. These days decoy calls of all kinds are also used by hunters.