The dimples are also called cups. The stones with these ‘pans’ are known as ‘cups stones’. Our eastern neighbors are known for countless Grosssteingraben (dolmen) and individual megaliths on which dimples (‘Napschen’) can be seen. There are also several hunebeds with cups in the Netherlands. In 2019, Mette van de Merwe established that six and possibly seven dolmens can be found in Drenthe.

In 1819 Johann Friedrich Heinrich Arends visited the province of Drenthe and described, among other things, the dolmen D14. He says that there are pits that resemble impressions of big fingers. His guide tells that the prints are from the giants.

Giants are also said to have built the dolmens, as described by Johan Picardt. So sometimes a connection is made with supernatural things. For example, the Napschensteine ​​in Germany are also called Blut-, Druiden-, Feen-, Opfer-, Teufels- or Hexensteine.

Not a very positive name for these wonderful stones by the way. You can see the blood dripping from the stones after the devils, witches, fairies and druids have completed their ritual sacrifice.

Some bloodstones are also known in the Netherlands. Popular belief is that if a pin is pricked in the Bloedsteen (bloodstone) at Ede during a full moon, it will bleed. Piet Pel thought that Kernhem could originally have been a sun-observation site. These were places where one could calculate what time it was using fixed points in the landscape, based on the position of the sun. His idea resulted in a beautiful comic album: ‘The white woman’ in the Suske en Wiske series, where facts and fiction overlap. But that’s allowed in comics. The story about a pin (or needle) and a bleeding stone also occurs in Utrecht (De Gesloten Steen; The Closed Stone) and is also told about the Amersfoortse Kei (The Boulder of Amersfoort).

The demonization of pre-Christian sites and structures took place for a long time. One had to stay away from these places, it was dangerous. According to Swedish folklore, elves live in nature and are often seen around hills, burial mounds, mountains and forests. People were warned to beware of fairies because they made people sick. Maybe this is something to laugh about in the 21st century. Superstitious and childish to be afraid of these places, because fairy tales do not exist.

In his Vita Karoli Magni, Einhard calls the original population of Drenthe ‘wild people who worshiped idols and were hostile to Christianity’. In the seventh and eighth century, the megaliths played an important role in the religion of unconverted tribes. Unfortunately, it is not known exactly what that role was, because the knowledge has only been transmitted in Christian scriptures. So we don’t get much further than ‘worshiping stones is prohibited’.

Was it just about religion? Perhaps there were more political reasons behind it. Saxons held their ‘ding’ (thing; people’s assembly) three times a year and it proved very difficult to seize power in this area, because there was no central government. The Saxons were a conglomerate of related tribes, each with its own leader, sacred places and shrines. Various ’things’ are known that took place at a hunebed, such as at Denghoog (thing-height or ding-hill). Charlemagne issued an edict in 789 calling for the destruction of all dolmens.

Was this just an aversion to “idolatry” or was it a way of breaking down the old power structure? Would the ’thing’ disappear if the thing place was destroyed? In any case, the dingspelen in Drenthe (Rolde, Oostermoer, Noordenveld, Dieverderdingspel, Beilerdingspel and Zuiderveld) changed in the primal parishes of Drenthe with parish churches in Rolde, Anlo, Vries, Diever, Beilen and Sleen (or Emmen).

You may wonder whether the “worship of stones” and other pre-Christian customs really disappeared from the population. Publicly following the old religion was not smart. Article 8 of the Capitulatio stated that the Saxons who refused to be baptized and refused to give up their religion should be executed. Charlemagne was nicknamed the ‘Preacher with the Sword’.

Although the intention was to make the old religion disappear by means of the new laws, the law books now offer an opportunity to learn something about that old religion.

There is, for example, the ‘Indiculus superstitionem et paganiarum’, which was drawn up during the Frankish church meeting of 743, containing a list of superstitious and pagan customs. And therein it is mentioned: ‘de hiis quae faciunt super petras’ (about the things they do above certain stones).

We don’t know exactly what these customs looked like, but it is certain that it was really dangerous to go to these places and stick to the old customs when the Franks came to power. You may not have been grabbed by a devil so much, but there was a real chance that you could be executed if you were caught in the place that was once so important. And many places were destroyed, not only those of stone.

We don’t know exactly what happened in the past. Yet information is available in our times. It was passed down from generation to generation that there were special places. The buildings were given a frightening name or supernatural things were at play. And thanks to story collectors, some of this information can still be found.

Sommeltjes are a kind of goblins who would dance in the moonlight on the Sommeltjesberg, a long-excavated burial mound on the island Texel. Pixies dance at Celtic sacrificial stones, fairies are present at Breton megaliths, korrigans await at dolmens and menhirs on October 31 and on the Iberian Peninsula it are giants (such as the Jentil) who erected the structures.

Various stories passed down from generation to generation can be found today in the collections of folktales. And it is not uncommon for these stories to reveal an archaeologically interesting place, which has been hidden out of sight for centuries.

The cups are also sometimes hidden from view. After being exposed to the natural elements for centuries, sometimes nothing can be seen with the naked eye.

But was it really the intention to see all the cups with the naked eye?

In Sweden, cup stones are known as Æbleskive stones, here elves are associated with megaliths and with the cups. Wise men and women are said to have secretly traveled to the stones at certain times to fill them with fat.

On the other side of the canal, the name for the dimples is ‘cup and ring marks’, so it does not only concern dimples but also ring-shaped figures. As already mentioned at the beginning of this article: it is not known why these figures were placed in the stones. Studies are still being conducted and there are various theories. For example, a study by Andy Jones of the Cornwall Archaeological Unit on Hendraburnick Down caught my attention.

They wanted to use the research to find out whether Hendraburnick Down was a natural formation or a man-made structure. It turned out to be a man-made structure, but they discovered even more. The quoit at Hendraburnick Down was found to contain inscriptions that only became visible at sunset. They could only be seen at a very low sun position (from the southeast) or by moonlight.

Darkness was often associated in ancient cultures with the supernatural and a sharpening of the senses. “When two pieces of quartz are knocked together, they create a glow for a short time,” Jones said. “We found fragments of quartz at the site and it may have been used as part of a nighttime activity, using the stone’s luminescent qualities to reveal the hidden art on the rock.

I enjoy reading such things. It reads like a fairy tale book. My imagination is running wild and I can see a greasy substance glowing in the moonlight as well. I think of Tolkien, in his stories Elrond can read Thror’s map by shining moonlight on it. Moon letters were a writing system invented by dwarves — they were ordinary runes, but written in such a way that they could only be read when the light of the moon shone behind the writing.

Some moon letters could be read in any moonlight, but it was possible to make the writing even more mysterious. More sophisticated moon letters could only be read by the same shape of the moon, or at the same time of year, as when they were written. Moon letters were written with silver pens. The substance ithildin, made of the precious metal mithril, reflected only starlight and moonlight.

An example of these moon letters can be found on the map of Lonely Mountain and the surrounding areas that Gandalf gave Thorin Oakenshield. The moon letters were of the more secretive variety and were written under a crescent moon on midsummer night. There stood:

“Stand by the gray stone when the thrush knocks and the setting sun will shine on the keyhole with the last light of Durin’s day.”

Charlemagne did not only destroy dolmens.

In 772 he destroyed the Irminsul; a wooden trunk of no small size, erected in height to worship the open sky.

The Brothers Grimm describe in “Der Mond”(the moon) a luminous bullet atop an oak tree, which radiated a circle of bright, soft light everywhere. Everything could be seen and clearly distinguished, even if it was not as bright as in sunshine.

Four men successfully brought her to their own land and pinned her up on a tall oak tree. But problems arose after their deaths, because they each took a quarter of the luminous bullet with them after their deaths.

Saint Peter on his horse rode down through the gates of heaven, to the underworld. There he calmed the dead, bade them lie down in their graves again, and took the moon with him, and hung it up in the sky.

What information is hidden in the cups? Will we ever find out?

Andy Jones reported: “Stonehenge does have markings, and I think that many more would be found at sites across the country if people were to look at them in different light.” I personally think that it is not only in Great Britain that new things can be found, if you look at archaeological finds, fairy tales and folktales in a different light.

This is a translation of a Dutch article, sources can be found in that article: megalieten in de maneschijn 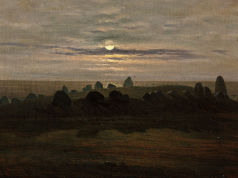 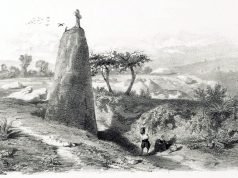