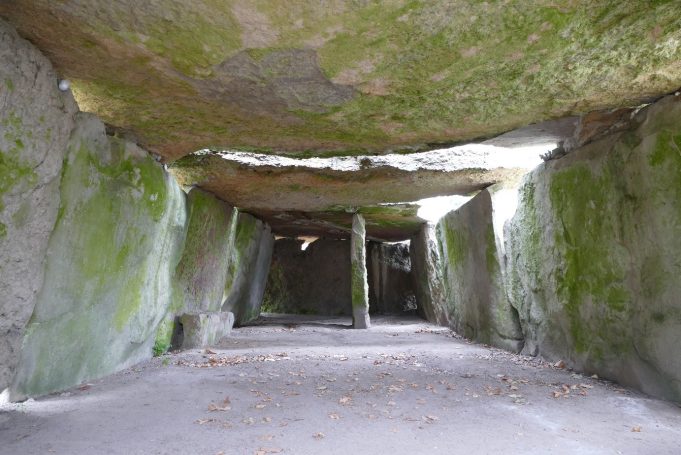 Mythische Stenen (Mythical Stones) is a series of prehistoric discovery guidebooks (in Dutch), written by Hendrik Gommer, describing megaliths in many European countries. This article is taken from the 15th volume which covers Mid- and Southwest France.

In Mid-France stand many hunebeds or dolmens of the so-called Angevin type: a short passage with a large rectangular chamber. They were probably built by a culture which traded extensively via the River Loire, because the largest hunebeds stand close to the river and its tributaries. The largest of them stands in a suburb of the town of Saumur: La Grand Dolmen de Bagneux.

‘Le Grand Dolmen de Bagneux’ is sometimes referred to as the second largest hunebed in Europe (the largest is in Spain). It is not the longest but it is the largest.  It stands in the garden of a house but is easily accessible if you ring the bell and pay 4 euros. Once used as a garden shed, this remarkable structure now sits in the small garden like an elephant in a cage.

The chamber is 18 metres long, 5.5 metres wide, 3.1 metres high and has four capstones, the largest being 7.6 metres long. Inside the chamber stands a pillar which reaches another three metres under the ground. The pillar does not actually support anything and was probably used to divide the chamber into compartments. The ‘lobby’ is 4 metres long but is badly damaged. The stone on the right of the lobby was placed here at a later date. The entrance now consists of a wooden door covered in a wooden curtain. That is not so strange, as the chamber may have had just such a door when it was first built.

The blocks of sandstone come from nearby. The largest stone weighs at least 40 tons. It must have required hundreds of people to transport it on rollers made of tree trunks. There have been some archaeological finds close by but nothing in the dolmen itself. The dolmen of Brézé, for example, contained 70 skeletons; the dolmen of Chacé (3 km away) 15 skeletons; and the dolmen of Le Bois Brard (1,200 metres away) 30 skeletons. For that reason it is most likely that this monument was also used as a collective grave for a local, and perhaps quite large, community. It is also possible that the structure was used a temple, perrhaps in honour of ancestors.

Le Grand Dolmen de Bagneux stands on the junction of the D360 and Rue de l’Arche, Saumur. Ring the bell at the gate. Street parking available.

More information about this and other books of the serie see https://mythicalstones.eu/en/mythische-stenen