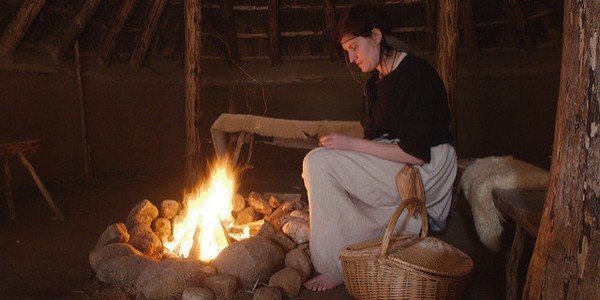 The Hunebed Centre is fortunate to own a large collection of clothing made by volunteers, based on prehistoric designs. This article is based on a workshop presented by museum archaeologist Nadine Lemmers covering the development of clothing from the Stone age to the Iron Age and focusing mainly on linen and leather. Our views of prehistory in general, and particularly the Stone Age, have changed significantly as a result of recent discoveries. These show that plant based fibres, leather and animal skins were the main raw materials used for making clothes.

Clothing in the Stone Age

To be honest it is quite a challenge to say anything about what people wore in this period. Not only did the Stone Age last for a long time, but very few remains of natural materials have been preserved. Little is known about Neanderthals, reindeer hunters and hunter-gatherers, but there are indications that they wore clothes made of leather, skins and plant fibres. One important discovery from the New Stone Age is Otzi, the ice man, who was clad in a complete Stone Age outfit of clothes and shoes. Otzi lived around 5,000 years ago and his clothes were made of a variety of materials. His leg bindings were strips of goatskin, his hat was made from bearskin and his shoes and coat were made of grass. This find confirmed the use of many different materials and skill in working them. Clothing was made to last a long time and would have been repaired when necessary. Clothes and shoes were embellished with items such as beads and animal teeth. Flax was grown but it is not known if this was specifically used to make large pieces of cloth. Small pieces were certainly produced from flax mixed with other plant fibres.

Clothing in the Bronze Age

Fashion in the Bronze Age changed through the use of wool. Wool was spun into threads and woven into textiles. In the Bronze Age leather and, possibly, also linen were used for clothing. Archaeological evidence comes from graves and, therefore, from the dead bodies. Archaeologists do not know for certain if these clothes were worn in daily life. In Denmark many remains of clothing have been found in the peat, including that of the Girl from Egtved.

Skins and leather were less important and woollen garments were darker in colour, from brown to black. People wore woollen underclothes (like the Man from Emmer-Erfscheidenveen), covered with a knee-length shawl or cloak with one or two shoulder straps. On top of that the men wore a coat made of wool or goatskin (Man from Emmer-Erfscheidenveen). On the head was a covering made of felt, although the Man from Emmer-Erfscheidenveen wore a hat made of sheepskin with a tail attached. Shoes were made from deerskin (the hairs on the inside) or leather. Women wore a tunic or blouse with short sleeves, a knee-length skirt made of cord or wool or a long dress. On their head women wore a hairnet made of cord. On their feet women wore socks and shoes made from deerskin (the hairs on the inside) or leather.

Clothing in the Iron Age

Clothing was made of wool, linen and fur or leather, and fur was usually worn with the hair on the inside. Sometimes the fur came from wild animals, but fur from goatskin and sheepskin was also frequently used, with the skin still attached. There are few examples of linen clothing, mainly ribbons or decorated edging. The woollen fragments  that have been found were often roughly woven. The many repairs tell us that clothing was considered valuable. In the Iron Age we first encounter trousers, made from strips of leg bindings. We know more about clothing in this period from finds preserved in peat, mainly in Denmark and Germany, but also from salt mines. Special mention should be made of the Woman from Huldremose from the 2nd century BC with her woollen skirt and wide woollen shawl with a woven pattern of squares. The skirt was originally blue and beige and the shawl red and beige.