Home english articles The hiding place in the Valtherbos 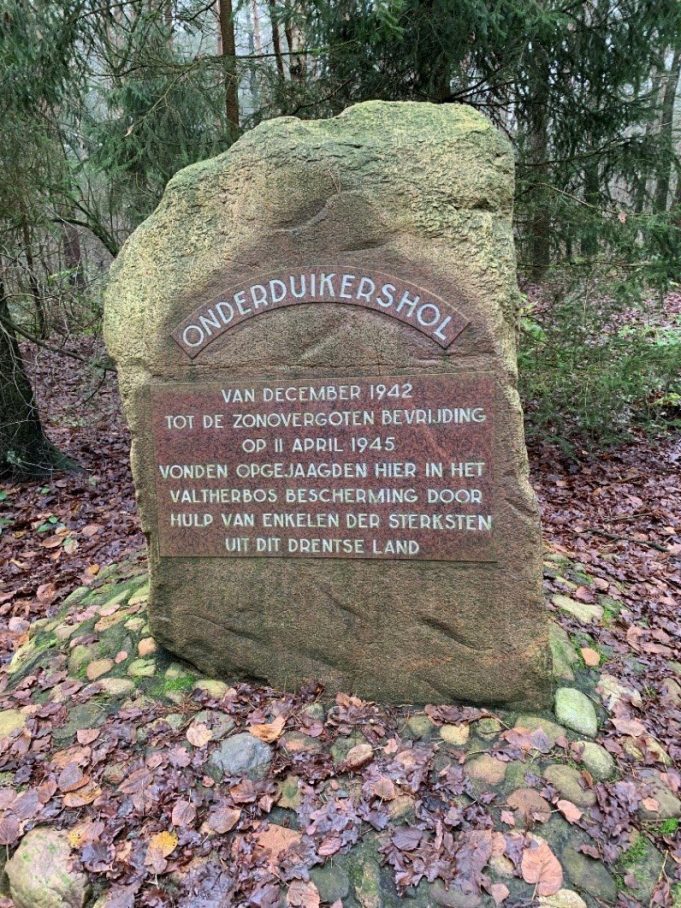 In the middle of the woods between Klijndijk and Valthe there is an underground hole where, between 1942 and 11 April 1945, 16 people hid from the invading German army. The 12 adults and 4 children were Jews, who would otherwise have been deported to death camps in Germany. Thanks to two helpers, who sacrificed their own lives, they survived the Second World War.

In 1942, six Jews from Emmen went into hiding. In the middle of the night they arrived at a poultry farm in Valthe owned by Bertus Zefat. At first they were hidden in one of the poultry houses behind his house. This hiding place was discovered and Zefat advised them to go into hiding in the nearby Valtherbos. Using primitive tools, they dug a hole in the ground and covered it with tree trunks, branches and leaves.

In 1943 the hole was discovered by chance by an old man called “Ol Pieter” who lived at the edge of the woods. He reported his discovery to the police. Fortunately the police told Bertus Zefat, who immediately ran  to the hiding place to warn the fugitives and tell them that they should leave without delay. That is what they did, dispersing to several addresses in and around Emmen.

A new hiding place was dug 500 metres from the first one in denser young woodland. Throughout that time the fugitives were supplied with food and drink by a small group of helpers directed by Bertus Zefat.

How did the fugitives spend their days?

Naturally the most important thing was to ensure that they were not discovered. If they ventured outside the hole for any reason, all traces had afterwards to be carefully removed. A rota ensured that two people in turn were responsible for this essential task. Everything was covered over again with leaves, pine needles and branches. Any broken twigs were carefully pruned and the cut was disguised with sand to make it invisible. Naturally, if it snowed any traces were easier to see and had to be covered with extra care. At such times they did not even dare to fetch water from the well which they had dug, but collected snow in buckets which was then melted.

Snow also meant problems with obtaining food and drink as they relied on what the helpers could bring. There was a small stove in the hole, so they were able to keep warm and cook food. For fuel they used petroleum so that there was no smoke.

Beds were made from straw with blankets on top. The living and sleeping areas were separated from each other. The toilet was a hole in the ground some distance away, camouflaged by plaited branches and leaves.

Naturally they were always afraid of being discovered. Men were often busy working in the woods and sometimes they came quite close. Sometimes a group of schoolchildren would visit the woods but the hole was so well camouflaged that nobody ever found it.

Bertus Zefat was betrayed and executed

Early in the morning of 27 July 1944, Bertus Zefat was arrested at his home. Someone had betrayed him. Under interrogation he refused to say anything, and on the same morning he was shot dead by a German soldier behind his house. After his death help for the fugitives was continued by others, including Zeefat’s widow Aaltje. At the same time that Bertus was taken at home, another helper, Jan Hendriks, was also arrested and taken to the infamous Scholtenshuis in Groningen. There he was roughly interrogated and inhumanely treated, but he also refused to say anything.

“We owe our lives to Bertus Zefat and Jan Hendriks”

How do we know that Jan Hendriks said nothing? Ab van Dien, one of the fugitives, described it thus: “All that we know is that this one man did the same as Bertus: he remained silent. We know that because we are still alive. We owe our lives to Bertus Zefat and Jan Hendriks”. Jan Hendriks was taken to the concentration camp of Neuengamme near Hamburg where he died as a result of forced labour in a nearby camp.

One of the fugitives, Ab van Dien, wrote a book about the hiding place, the people who lived there and the helpers. He called the book “The Hunted”. He describes how the fugitives remained in the hole until 11 April 1945, one day after the liberation of Emmen. On 11 April the area around Valthe and Klijndijk was also liberated by the Polish allies.

Ab van Dien married Gien Warringa, one of the helpers. Another helper was Aaltjo Oldenburger, who was around 20 years old when he came into contact with the fugitives in the woods. In January 2013 in Valthe he received the Yad Vashem award from the Israeli ambassador. The Yad Vashem medal is awarded to non-Jewish people who helped Jews to hide, escape and survive during the Second World War. One remarkable fact is that a tree called the “A-tree” still stands in the Valtherbos. The letter “A” was carved in the bark by Aaltjo Oldenburger to ensure that people would always be able to find the path to the hiding place. He did it with a scissors which – as he was a cloth dealer – he always carried with him. The location of the A-tree is sign-posted from the hiding place.

“In every age there are thousands of heroes whose names appear in no history books”. Otto Weiss, German-Jewish writer and poet, 1898-1944.

“Aaltjo Oldenburger: Through his efforts 16 Jews hid from the Germans and survived the Second World War. 11 April 1945.”

“The Hunted” Authors : A van Dien, J Withaar  (Dutch only)