Underground tunnels, hidden from everyone… who doesn’t know the stories? One of Lyon’s best kept secrets is its underground network of tunnels in the shape of a fishbone. Some thirty galleries are hidden 40 meters below Croix-Rousse and were discovered by accident in the 1960s. Since the tunnels are not mentioned anywhere in the city records, their purpose remains a mystery. Were they built by the Templars, is it a military relic or a plain old tunnel? And how can the human remains and the children’s handprints on the walls be explained?

The Templars’ Tunnel is a 350-meter-long tunnel in the city of Akko in northern Israel. It stretches from the Templar Castle in the west to the harbor of Acre in the east.

It crosses the Pisani quarter along the way and was formerly used as a strategic underground passage connecting the castle and the port.

A couple saw a group in robes disappear into thin air at the Nicolaïkerk in Appingedam from one moment to the next. The woman described the sounds she heard afterwards as ‘voices from the tiles’. The Appingedam archives regularly contain underground tunnels and corridors. Large parts of the city would have been tunnelled under in earlier days to escape the occupiers and hostile visitors. In the library, ancient writings even appear to mention ’the underground labyrinths on the Appe’, an interconnected system of corridors, in which one would certainly get lost (if one did not know the way there).

And there are all kinds of stories about an underground tunnel system in Leiden: from the center, all the way to where the Spanish lines were in 1574, during the Siege. ’t Spijker used to be a monastery and from there an underground passage led to the castle. There is an underground passage from the Monastery of Saint Gabriel (opposite Hekendorp) to a farm on the Goejanverwelledijk. And in Ede there is also said to be a secret underground passage between Huize Kernhem and the Oude Kerk, according to many it continues to the Paasberg.

According to local lore, Malta is dotted with underground tunnels, as I mentioned at the beginning of this article. These corridors supposedly exist in many overlapping layers that intersect and travel far and wide across the country. You could walk from one end of Malta to the other end of Malta underground, the stories say. In my previous article, Place of the Giants: Megalithic Temples in Malta, I wrote about the Megalithic Temples and the stories told about Malta. In this article I want to focus on underground structures that can be found in Malta and Gozo: the prehistoric rock tombs are no less impressive than the above-ground megalithic temples.

Now that places like the Hal Saflieni Hypogeum have been discovered, indicating that Malta did indeed have a prehistoric civilization that carved out the rocks, the idea of ​​carving tunnels across the country doesn’t sound so unrealistic at all. Could Malta really have a hidden underground network of tunnels and catacombs that are kept hidden from the public?

The (collective) rock tombs were used from 4100 BC to the early Bronze Age (1500 BC). From simple small rock tombs it grew into impressive underground monuments. During the Tarxien phase (3150-2500 BC), architectural and artistic achievements flourished. Decorations in ocher and figures carved in stone imitated the figures of above-ground temples.

The upper level of the Hal Saflieni Hypogeum is the oldest, dating from 3600-3300 BC. The middle level dates from 3300-3000 BC. The lower one is the youngest and was built between 3150 and 2500 BC. The Hal Saflieni Hypogeum was discovered in 1902. Unfortunately, the record of the excavation has been lost. The underground structure is located a few hundred meters from the megalithic temple of Tarxien. It is very probable that a megalithic structure also stood above ground. In the 1990s, research revealed a monumental structure at the entrance to the underground section.

The collective cemetery, a repository of ocher spiral paintings, clay sculptures and skeletons, is shrouded in mystery and a fertile ground for evocative stories.

In the famous 1975 Australian film Picnic at Hanging Rock, a group of schoolgirls and their teacher go missing during a school trip to an unusual rock formation. Unexplained disappearances seem to stir the public imagination. A similar urban legend concerns the “lost children” of the Hypogeum, which gained credibility and international fame after the story appeared in the August 1940 National Geographic Magazine.

The article mentions how a group of Maltese primary school children and their teachers descended into the Hypogeum. They entered a hallway never to return. Their mothers, the report says, “declared for weeks that they heard wails and screams coming from the ground… but countless excavations and searches turned up no trace of the lost souls.” None of these claims have been substantiated by local newspaper or resident reports. about missing children. It is reminiscent of the ‘voices from the tiles’ in Appingedam.

Also, there are no signs of a collapse in the Hypogeum, as there is a twist on the story where the school class couldn’t come back because the hallway they had entered was blocked by rocks and they couldn’t get out. One explanation for the myth is “to warn children of the dangers of these sites,” suggests an interpretive panel in the Hypogeum. But there are still stories that the government has blocked corridors to prevent a similar drama.

A famous artifact is the Sleeping Lady. This clay statue of a reclining lady was found in one of the pits of the Hal Saflieni Hypogeum in Malta. It has traces of ocher yellow paint and is thought to represent a “mother goddess”. It originates from the Temple period (4000 – 2500 BC) and is now on display at the National Museum of Archeology in Valleta.

Sir Tami Zammit, who was interested in craniology, classified some skulls found in the Hypogeum as “of the long-headed type”. This gave rise to the suspicion that the skulls were related to the elongated skulls found in South America. The removal of six fragmented skulls from the exhibit in 1995, when the National Museum of Archeology closed for renovation, helped fuel speculation. The museum states that the skulls are no more elongated than the modern skull. One of the skulls can still be seen in the Hypogeum itself.

It is known that in the Neolithic the Hypogeum was used not only as a storehouse for bones, but also as a sanctuary for ritual use. In a room known as the “Oracle Room” on the second level of the Hypogeum, the presence of a strong resonance effect has been detected: a double resonance frequency at 70 Hz and 114 Hz. With a male voice tuned to these frequencies, it is possible to stimulate the resonance phenomenon throughout the Hypogeum.

Furthermore, it was discovered that percussion instruments can stimulate resonance. Laboratory tests indicate that these frequencies have a strong effect on human brain activity. Since it is likely that the chambers served as centers for social or spiritual events, the resonance of the chamber cavities would have supported human ritual chant and mystical consciousness.

There is also an underground structure on Gozo. Here Xargha was used as a central underground burial ground. The structure was provided with above-ground megalithic entrances and walls and is located west of Ggantija.

The Xagħra circle is considered one of the most important archaeological sites in Malta. The megalithic stone circle has a diameter of 45 meters and was partially excavated.

It is the only stone-enclosed hypogeum in Europe and the only prehistoric necropolis in Malta that has been properly excavated (as mentioned before, no records of the excavation of the human remains and artifacts at Ħal-Saflieni that were discovered at the beginning of the twentieth century) have survived. 20th century were cleared).

During the Xagħra excavations, approximately 220,000 human bones from between 450 and 800 individuals were uncovered, along with some animal bones and a range of artifacts, including figurines and architectural fragments.

Xargha is a 40 minute walk from Ramla Bay. According to some researchers, this bay is the residence of the nymph Calypso, who lived there in a cave. She falls in love with Odysseus and keeps him with her on her island for seven years, as described in the Odyssey. With the promise of immortality and eternal youth, she tries to keep Odysseus to herself.

A small cave is suggested as the nymph’s possible residence, but how do you keep a man captive there for 7 years? I like to fantasize that the nymph could be connected to a slightly larger subterranean space or cave, such as a hypogeum. And maybe you could get there from the beach… through an underground passage…

This is a translation of a Dutch article, sources can be found in that article: Ondergrondse gangen, mythe of realiteit? 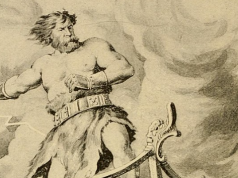 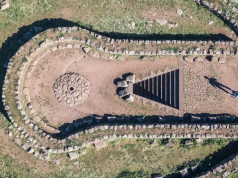 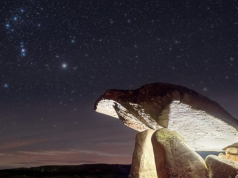