Home english articles What is amber?

Amber is the fossilised (petrified) resin of coniferous trees dating from around 30-50 million years ago. The resin was released when the tree was damaged. After the ice ages amber was washed into the sea and today much of it is harvested from the Baltic Sea and also along the coasts of Denmark, Germany and the Netherlands.

The English name probably comes from the Arabic word ‘ambar’, meaning ambergris. This is a waxy aromatic substance created in the intestines of sperm whales, which was used in ancient times (and still today) in making perfumes. The Dutch word ‘barnsteen’ means ‘burning stone’ and indeed amber does burn and releases an odour of resin and incense or antiseptic. Amber can be transparent or opaque and the colour varies from yellow to orange, red,  brown, black, green and blue, depending on the impurities it contains. Amber also sometimes contains preserved insects which were caught in the sticky resin before the amber solidified. Among other properties, amber can produce static electricity if you rub it with wool.

Uses of amber from Prehistory to today

Amber has been used as jewellery since the Stone Age 13,000 years ago, for instance by reindeer hunters to make jewellery. Amber beads have also been found inside some Dutch hunebeds. The material continued to be used in the Bronze and Iron Ages and necklaces comprising hundreds of beads have been found.

In Egypt, the breast ornament of the Egyptian pharaoh Tutankhamun (c. 1333–1324 BC) contains large amber beads from the Baltic, and similar beads were found by Heinrich Schliemann during his excavations at Mycenae. Amber from the North Sea was sent as an offering to the temple of Apollo at Delphi in Greece. Other uses today and in the past include perfumes, scent and incense, and in medicine. In ancient Greece, Hippocrates (called the father of medicine) used amber to treat a wide variety of illnesses.

Over the centuries many decorative items have been carved from amber and there are a number of museums dedicated to these objects. One such is the Malbark Castle Museum in Poland, whose collection includes this stunning chest.

One of the most amazing uses of amber can be found in Russia, the famous Amber Room in the Catherine Palace in Tsarskoe Selo near St Petersburg. The Amber Room has a mysterious history. It was originally constructed in 1701 in the Charlottenburg Palace in Germany. On a visit to the palace, Peter the Great of Russia admired it so much that the then king of Prussia presented it to him as a gift. The complete room was moved to Russia and installed in the Catherine Palace, where it stayed intact until World War II. But then invading German soldiers disassembled it, shipped it to Germany and reinstalled it in a castle museum. In 1943, the room was again packed away and then disappeared from history. No one knows what happened to the original panels, believed to contain six tons of amber.

The Amber Room has since been replicated in the Catherine Palace and returned to its former glory, and today’s visitors can see it as part of a guided tour.

How to test whether amber is genuine.

Today amber can be bought in many shops from jewellers to specialist fossil retailers (such as Versteend Leven in Drouwen). But beware – what you get is not always what you expected. Amber is so popular and sometimes so expensive that there is a huge market in fakes, particularly for pendants containing whole insects. So how do you test whether the amber is genuine or not?

The first test is the smell. Genuine amber has a recognisable odour of pine trees, while fake pieces smell sweeter. The second test is to warm it by rubbing it in the palm of your hand until the odour is released – genuine amber will smell of incense and resin.
The third test is to prick the surface of the amber with a heated needle in order to release the characteristic odour. The fourth test is to place a piece of amber in a bowl containing 100 ml of water and 40 grams of salt. Real amber will float, fake will sink to the bottom. As a final test, the authenticity of amber can be verified by an analyst armed with an infrared-spectroscope. 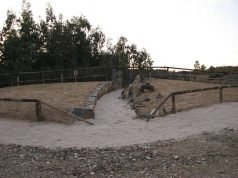 Megaliths in the Alto Tejo, Portugal