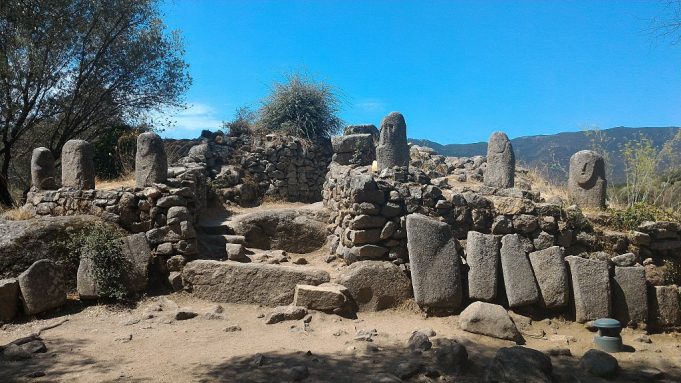 Filitosa is a megalithic site in the south of the island of Corsica, part of France. The settlement period lasted from the end of the Neolithicum and the beginning of the Bronze Age until somewhere around the time of the Romans on the island.

Location
The site lies by the D57 road, a few hundred metres from the village of Filitosa, which is to the west of Sollacaro in the canton of Petreto-Bicchisano, arrondissement Sartène, and to the north of Propriano in the departement of Corse-du-Sud. It lies on a hill looking out over the Taravo valley.

History and characteristics of the site

The site was discovered in 1946 by the owner of the land, Charles-Antoine Cesari, and brought to the notice of archaeologists by the British writer Dorothy Carrington (see also her book ‘Granite Island: Portrait of Corsica’)

A total of twenty menhirs were found in Filitosa, dating from different times. They form roughly half of the total number of monuments on Corsica.

The site
The site of Filitosa is approached by a path through an old olive grove. The first monument to be seen is an overhanging rock and the surrounding wall. Then you come to the central monument. The pad leads past a few small buildings and 50 metres further to the western monument erected by the Torreans around 1500 BC. From there you have a view over a row of five stone megaliths standing around the foot of a 2000 year old olive tree. Behind the tree is the old stone quarry from which the megaliths were brought.